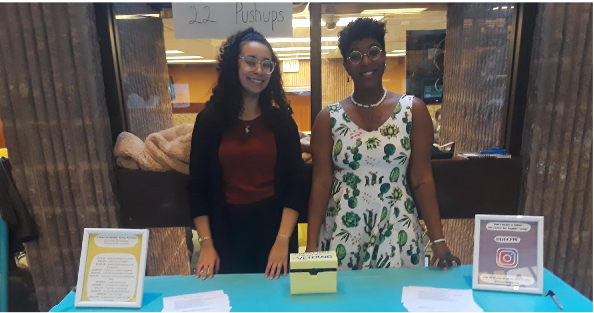 On average, about 22 veterans commit suicide a day, according to a study conducted by the Department of Veterans Affairs. This staggering statistic has inspired the 22 Pushup Challenge.

Originally created by 22KILL, a group dedicated to raising awareness to the high suicide rate among veterans, this challenge has people do 22 pushups in a row to raise awareness for veterans’ mental wellbeing. The Center of Healthy Living decided to bring this challenge to campus in 2016, and it has been an annual event ever since.

On Wednesday, Nov. 6, students and faculty participated in the challenge in Hillwood Com-mons during common hour. Throughout the course of the event, several students stopped by and attempted the challenge. Some people were able to complete the challenge by doing all 22 pushups, while others were able to do about half the required pushups.

Students seemed to enjoy the event, but ex-pressed surprise over the statistic it was based on. “I think it’s a nice way to show respect,” Zach Tabor, a sophomore musical theatre major, said. “I think it’s a jarring statistic that 22 veterans commit suicide a day and I didn’t know about it until today. This is bringing proper light to it and I think it’s a serious problem that needs more attention.”

In addition to raising awareness, the event also helped raise money for the Wounded Warrior Project, a non-profit organization geared toward helping wounded veterans who were harmed in the military actions following the September 11, 2001 terrorist attacks.