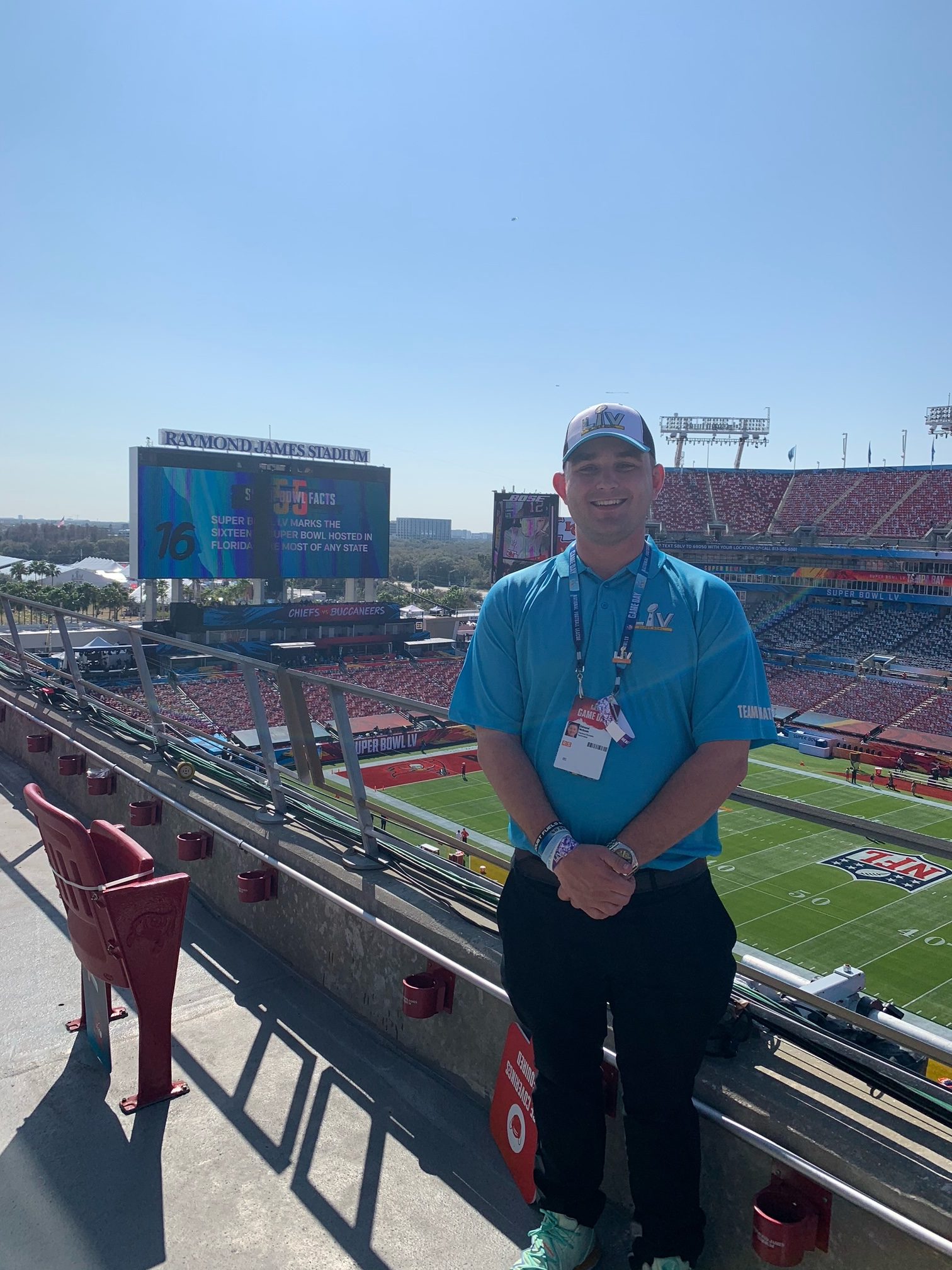 Eddie McQuade, a senior sports management major, got the opportunity of a lifetime when he had the experience to intern at the Super Bowl. Over his time there, McQuade got to witness and work firsthand in what went on to prepare for the big game in Tampa, Florida.

The Organization that Eddie traveled down with was called Living Sport. McQuade said he found Living Sport on Linkedin.

“In order to graduate from Post you have to do an internship. So going into the fall I knew I had about 12 credits left to graduate so I was saving it for the spring,” he said. “I was emailed a link with a bunch of LinkedIn internships through my advisor, so I started scrolling through it. Eventually I saw ‘Living Sport Tampa 2021 Super Bowl’ and immediately went all in to get into the program.”

McQuade had many times where he was unsure if it would work out due to the timing and communication.

“At the time I saw the application they had already started doing interviews, this was like mid October,” he said. “Weeks went by and I asked them if I was in the program. I was emailed saying ‘we’re still going over your application’ and I was honestly losing some hope considering it was right around thanksgiving break.”

McQuade said he stayed patient and waited for the perfect time to take advantage of.

“Right as we came back from Thanksgiving break, The program emailed me saying that three spots just opened and I was gonna be one of ten candidates for the interview the next day,” he said. “I killed it the next day and was brought into the family. Even though the whole process was definitely nerve racking, I wouldn’t change it.”

McQuade said the best part was when he found out exactly what the program would offer in exchange for the time put in.

“I liked how they were gonna get us to the Superbowl, tour Tampa Bay & network with professionals in the sports industry,” he said.

McQuade loved the job he and his team had specifically laid out for them.

“I worked directly with the populous at the game and showed people how to use the Policy Path App along with working the fan events over the three days before the game,” he said. “They were located at three different locations around Tampa Bay & it was an amazing experience.”

McQuade claimed the best part was when he got to enjoy watching the game after working for the days leading up to kickoff.

“My best memory without a doubt was being inside Raymond James Stadium during the Super Bowl. I never in my wildest dreams ever would’ve thought I’d be lucky enough to be at one let alone the one right in a pandemic,” he said. “Watching Tom Brady vs Patrick Mahomes will be a Super Bowl that’ll be talked about forever and I’m honored to say I was there to watch Brady get his seventh title”.

McQuade said the people he met and the relationships he created will be something he cherishes forever.

“I learned about the city of Tampa Bay & the 39 other people I went on this trip with,” he said. “The 40 people on the internship came from all over the country and the world to get to Tampa bay for 10 days and it created a lifelong bond.”

McQuade was ecstatic to get the opportunity to work at the Superbowl, and had a lot to take away from the experience.

“I learned how to grow as a person, how to get involved in the sports industry, and how people whom you’ve never even knew existed can have the biggest impact on your life,” he said. “Tampa Bay is a beautiful place and I would recommend it to anyone who wants to visit Florida.”

Published in Features, Football and Sports