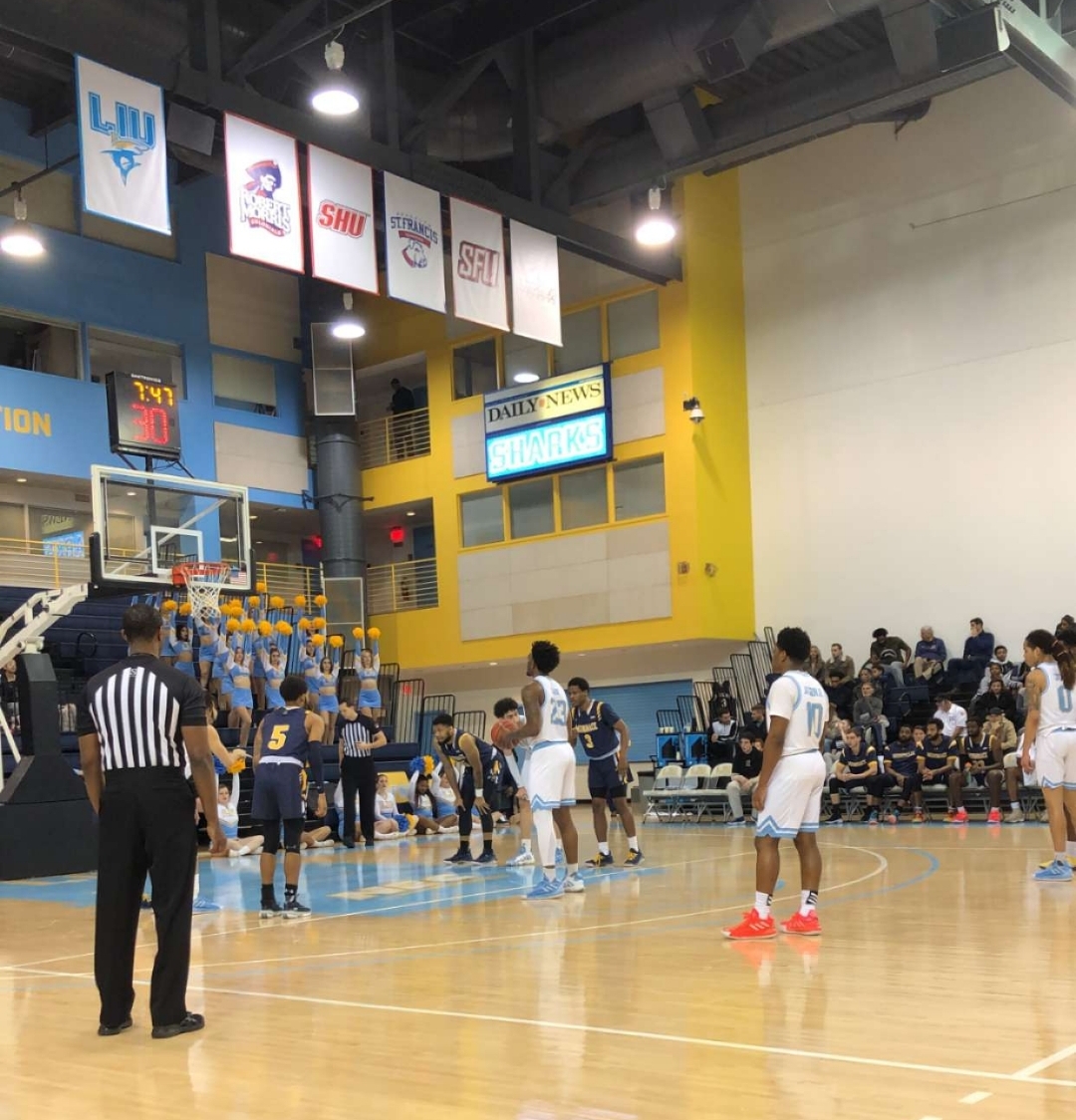 A Victorious Night for Men’s Basketball The men’s basketball team defeated the first place Merrimack Warriors in a conference game on Saturday, Feb. 8, walking away victorious in overtime with a score of 67-64. In addition to that, it was a record-breaking day for LIU, as three Sharks hit career marks during the game.

It was a tight-knit game, as both teams went back and forth throughout the first half. Each team used small runs to their advantage, but every lead stayed within single digits. In halftime, the Sharks headed to the locker room with a three-point lead (32-29).

However, it was Merrimack who started the second half the strongest. The Warriors went on a 9-0 run to take a 38-32 lead, and they wouldn’t stop there. They went up by as many as nine points, as they took a 45-36 lead with 13 minutes left to play in the game.

Despite the deficit, the Sharks managed to fight back and answered with an 11-0 run, making it a close game once again. Sophomore Virshon Cotton hit a late basket to give the Sharks a 58-55 lead with 31 seconds left, but the Warriors answered with a three pointer and sent the game to overtime.

The Sharks opened the overtime period with a 7-0 run, but the Warriors answered with a 6-0 run of their own to make the score 65-64 in the final 30 seconds. However, Merrimack needed to foul to keep their hopes alive, and the Sharks were able to convert three out of four free throws to give themselves a 67- 64 victory.

With the win, the Sharks improved their record (6-5) in the NEC with seven games remaining, keeping their hopes alive to get the No. 1 seed in the playoffs. They are currently placed on fifth place in the NEC, just one game behind St. Francis University.

Besides putting the team in a better position in the conference, the win also included broken records. During the overtime period, senior Raiquan Clark became LIU’s all-time leading scorer with 1,874 total career points so far.

Redshirt junior Ty Flowers had 27 rebounds, which is a new campus record for rebounds in a game, and the most in any game ever in the Northeast Conference. The 27 rebounds broke a mark set exactly 37 years prior to the game, in 1983.

Finally, Head Coach Derek Kellogg earned his 200th career victory as a head coach. “It was a really good night to be a Shark,” he said in his post game press conference.

Coming up, the Sharks will head to Central Connecticut State University to