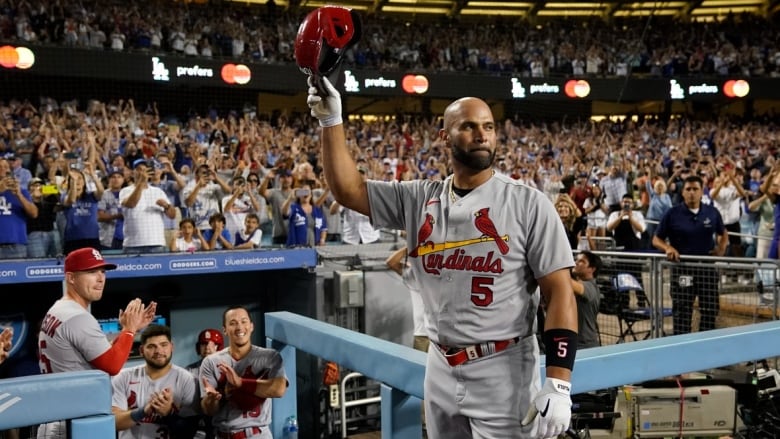 On Wednesday, Sep. 23, one of the most prolific baseball players in history, Albert Pujols, hit his 700th career home run cementing his Hall Of Fame legacy in the MLB.

At age 42, there was some doubt from MLB fans that Albert Pujols would even have a chance to hit the magic number due to COVID-19 eliminating 100+ games from the 2020 season.

Pujols had a tremendous career with the St. Louis Cardinals from 2001-2011 before signing with the Los Angeles Angels, where he played for the next decade.

The 3-time MVP, 11-time all-star, and 2-time World Series champion stated earlier in the season at a press conference that upon signing a one-year deal worth $2,500,000, he would be retiring at the end of the season with the original team that drafted him, the Cardinals.

Junior adolescent education major specializing in history, Ryan Kaim, even had his doubts when it came to Albert’s chase for 700.

“At the beginning of the year, I’d have to say I didn’t expect Albert to reach his 700th. He hadn’t hit over 20 homers since 2019 and 30 or more since 2016, so to expect him to his 21 in about half as many at-bats as he usually would get as an everyday player isn’t anything but miraculous,” Kaim said.

Pujols’ chase for MLB history was fueled by one of the best two-month stretches for a designated hitter/bench player in recent memory. In August and September, following the MLB All-star game, Pujols hit a whopping .304 batting avg (BA) and had an on-base + slugging (OPS) over 1.000, including 14 home runs.

The future hall of fame righty is also batting an insane .354 with 13 home runs and an OPS over 1.150 versus left-handed pitching this season, which allowed him to get regular at-bats.

Senior digital arts and design major Anthony Hines, who has watched MLB baseball religiously since 2014, thinks that Albert Pujols has certain qualities that set him apart from the rest of the MLB. Hines stated that Pujols’ love of the game, his drive, and overall dependability, alongside his track record, kept his longevity and lasting success in the MLB.

Pujols has played for 22 years in the major leagues and is now looking for his third World Series Victory with the Cardinals. Paired alongside Starting Pitcher Adam Wainwright and Catcher Yadier Molina, who made history this season as well, when they became the MLB record holder for starts made as a battery with 325, the Cardinals clinched a postseason birth when they won the National League Central Division.

Now, as a final playoff run as a trio, Pujols, Wainwright and Molina are looking to make a splash in the playoffs. Kaim believes these three veterans paired up with other superstar talent is a team to watch in October.

“With Wainwright, Molina, and Pujols all heading into their last season, I expect the Cards to play with a ferocity and energy not seen for a while,” Kaim said. “They have heated up as of late and can clearly be a threat. Pujols will probably hit around a .300 clip and may send a bomb or two.”

Albert Pujols may be one of the last few members of the 700 home run club for many years. Anthony Hines’ reaction to Pujols’ moment best describes the general reaction to one of baseball’s best.

“My honest reaction was absolute disbelief and pure joy seeing one of the greatest hitters of all time reaching one of the most impressive feats in all of baseball,” Hines said.