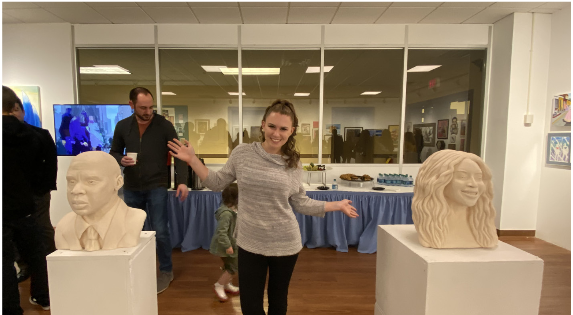 On a weekly basis, the SAL gallery provides a space for current students to showcase their artwork. Right on time for homecoming, the work of alumni from the fine arts programs filled the gallery. The show opened on Oct. 14 and will be up until Oct. 25.

Along the walls of the room and resting on top of pedestals, 52 different pieces of artwork from 51 alumni were displayed. The artwork was of a wide variety, ranging from digital photographs to solar plate etchings to serigraphs and more.

A reception was held from 5-8 p.m. on Wednesday, Oct. 16 as a grand opening to the gallery. The crowded room was filled with friends, family, and some of the artists. one being alum Susan Kelly (2017).

Susan Kelly (‘17) was one of the alumni to display their work. Kelly chose to display a stained glass mosaic piece titled “Suho.” “My work revolves around the portrayal of Korean pop idols. I used stained glass material, so it plays on the preconceived notion of stain glass [representing] holy figures which is what fans of these [K-pop] groups see in their idols,” she said. Kelly explained that she created the piece because she is a huge K-pop fan. “It’s all that I’m into,” she said.

An acrylic painting on canvas titled “Moonlight in Mahogany” belongs to alumna Arielle Dugué (‘16). Her inspiration for the painting derived from a simple Google search. “I saw a tree that was curved backward and to me it looked like figures. So I decided to create a picture depicting that tree with human like figures,” she said. The nature-orientated artwork took her two weeks to complete. According to Dugué, it was difficult for her to choose which piece to bring to the gallery, but she decided it was best for her to bring her most recently completed work.

On top of two pedestals sat giant ceramic busts of famous artists, Beyoncé and Jay Z. These two pieces were designed and created by Emily Halper (‘19). The process took seven months to complete, but five of those months were dedicated strictly to creating Beyoncé. “Women, like Beyoncé, are harder to make because when they wear makeup, their face shape is different. In certain pictures, their face looks way more round versus much more distinct cheekbones. The texture of the hair is different too which affects the shape of the face,” she said.

The next SAL gallery reception will take place on Oct. 30 from 5-8 p.m. for the BFA Photo Thesis show.