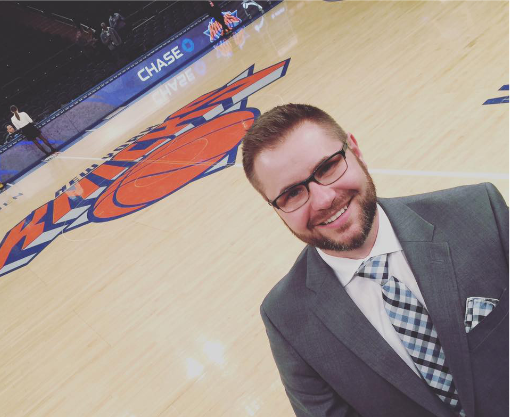 The Portland Trail Blazers, an NBA team, hired alumnus Travis Demers (2003) as their new radio play-by-play broadcaster. He is the fourth ever radio play-by-play broadcaster in the team’s history. “To have the opportunity to do this at the highest level in the 50-year history of this team, only three people have ever done it and there are only 30 people in the world who has this job, it’s literally a dream come true,” Demers said.

Demers got the opportunity to fill in as the Trail Blazers’ play-by-play broadcaster in 2018 when their announcer of 21 years, Brian Wheeler, was unable to work due to health issues. Demers called 57 games for the team last season and will now do so full time. In his new position, he will broadcast every one of the Trail Blazers’ games. “When you turn on the radio to listen to the game, you will be listening to me,” he said.

Ever since Demers was a child, he dreamt of being a broadcaster. “You imagine calling a big moment. You sit there in your driveway with your friends and you are broadcasting your little game. You are doing the voice, and you are doing the fake crowd noises,” Demers said. “This is something I’ve literally wanted to do my entire life.”

Demers graduated with a BFA in communications with a specialization in broadcasting. In college, he worked for the school’s radio station, WCWP, currently known as the Wave, doing talk shows and play-by-play broadcasting for football, basketball, baseball lacrosse. The experience he got at WCWP is something Demers has found useful in the real workplace. “The classes were helpful, but having the experience of working at the radio station WCWP, that’s what prepared me,” he said. “Getting the on-air experience while I was in college, getting to make mistakes, learn what to do and what not to do, how to be on air and how to not be nervous that was all really valuable.”

Demers sees the school radio station, his advisor Dan Cox and the people he got to work with as important factors to his success. “Dan Cox really put me in a position to succeed and build my career. Without having the opportunities to do what I did at WCWP and to work with the people I got to work with, there is no way I would be here right now,” Demers said.

“Travis was an outstanding sports broadcaster as a student at WCWP,” said Daniel Cox, director station manager of WCWP. “He was persistent and very tough on himself. He strived to be better each time he called a game on the radio. I am extremely proud of his accomplishments, not just as a broadcaster but as a person.”

Even if Demers felt well prepared by the school, in the real workplace he soon realized that he still had a lot to learn. “I really didn’t know how little I actually knew until I got out to the real world,” he said. “I didn’t quite have a grasp of how challenging this industry could be.” He doesn’t blame the school for his unawareness and believes that a person needs to get out there to fully understand it. “There’s really nothing that can prepare you for that,” Demers said.

In an industry where everybody wants their big break, a person never has a safe spot, Demers explained. “It’s so competitive, and you never really have any job security even when you are full time,” he said. “The uncertainty of this business is the most challenging thing.”

Demers had experienced difficulties with the industry several times. “I have been let go from multiple jobs and I have been told by bosses that I didn’t have a future in this business,” he said. However, Demers knew what he wanted, and he kept working towards his goal. “I worked hard and I didn’t let any of that get to me,” he said. “Things were really difficult but I kept working at it and that’s what you have to do. If you have a dream you have to fight for it and do everything you can to accomplish that.”

Another piece of advice Demers wants to give is to place oneself in the field they want to work within, even if it demands sacrifices. “Whatever your dream is, find a way to do that. Don’t do something else. If it means going to a small town or if it means leaving your comfort zone, find a place to do what it is that you want to do because that is the only way that it is going to happen,” he said. “Nobody is going to hand anything to you.”

During his career, Demers has worked at ABC Sports Radio as a producer, SiriusXM in Washington D.C. as sports update anchor, and at 1080 The Fan in Portland hosting a sports talk show, amongst others. Currently, alongside his new broadcasting job for the Trail Blazers, Demers hosts a sports talk show on Rip City Radio between 3 p.m. and 6 p.m.

After years of searching and hard work, Demers found what he searched for. “My entire life and my entire career I have always been thinking about what’s the next job. This is that job. I want to do this job for the rest of my life,” he said