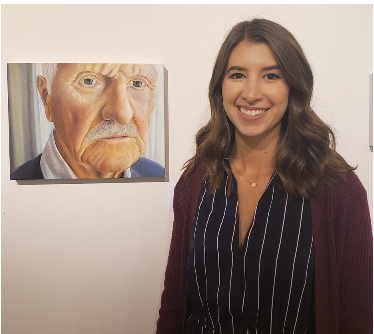 An Artist’s Trek Down Memory Lane

Recalling a distant memory can be a challenging task because of unclear details and vague images of the past. Stephanie Hart, second-year MFA student, depicted these fuzzy memories on canvas in her exhibition “Nostalgia” from Nov. 4-8 in the Sculpture building, along with portraits of her family members.

The meaning of Hart’s collection of paintings lies within her connections to her loved ones and the memories she shared with them. Her exhibition featured two en pleinair pieces that she painted on-site in her family’s homeland of Greece. Each piece took up to four or five hours to complete. “It was different for me, it was [my] first time painting on-site in the sun of the summer with bugs around,” Hart said. “It was definitely an experience.”

Some of Hart’s acrylic seascape paintings are abstract to symbolize the feeling she had looking back on memories of being at the beach with her family. “The abstract [style] is something new to me where I’ve been exploring and enjoying myself with it,” Hart said. “I did not work from an image, I painted from memory and let my feelings drive the image and the composition.”

Hart’s mother, Vivian, attended the reception, and she witnessed her daughter create the paintings featured in the exhibition. “[Stephanie] always had an idea in her head of how she wanted things to turn out, even as a toddler,” she said. “You’d have to guess what it is that was on the paper that wasn’t in her mind, but, it always comes out great in the end.”Hart’s memories took on a more defined shape as her maternal grandparents were the subjects of portraits painted in realism, Hart’s primary style. For these pieces, she referenced photographs.

Hart’s grandparents, whom she calls “Pappou” and “Yaiyai,” are still living. Her great-grandfather passed away before she ever got to meet him.

The portrait of her great grandfather is a monochromatic underpainting, meaning the lines of the image were never overlaid with a finishing layer of colored paint. “I’ve never actually met him, so working from this photograph and it being so ghostly, light and transparent, I loved that effect because of the story it was telling,” Hart said. This story is Hart’s connection to someone whose memory is only alive in her because of a photograph.

Hart completed the portrait of her grandmother in two days. The portrait was originally meant to be another underpainting that she would paint over in color, however once she completed the first step, Hart fell in love with the look of the piece. “I thought monochromatic was the way it needed to be,” she said. To duplicate the piece on another canvas, she had a print made of the underpainting’s image which she colored with oil paint, creating another original piece.

Having graduated in 2016 with a BFA in art education, Hart learned about multiple techniques and had her pick of which ones she wanted to explore. “I have always loved working with different mediums depending on what I want to achieve or [feel] like making,” Hart said. In the past she has worked with charcoal, oil pastel, ceramics and photography. Hart’s interest in working with oil paints began in spring 2019. Previously, she would primarily use acrylic paint. “I started using oil and I really fell in love with it,” Hart said. Using oil paints allowed for easier blending than with acrylic, and Hart enjoyed seeing the rich colors in her representational pieces.

Through her professors and advisors’ teaching, Hart has reached a new level of mastery in her artwork. “The art department here is really great; they are always willing to help you. If you want to put in the time, they’ll put in the time for you,” Hart said. One of her professors is Chris Anne Ambery, art professor specializing in printmaking.

Ambery advised Hart on how to approach different themes and painting techniques in her pieces. “My role is to guide her and help her along in the process,” Ambery said. “I’ve seen her flourish tremendously in this process and become more confident in her painting.”