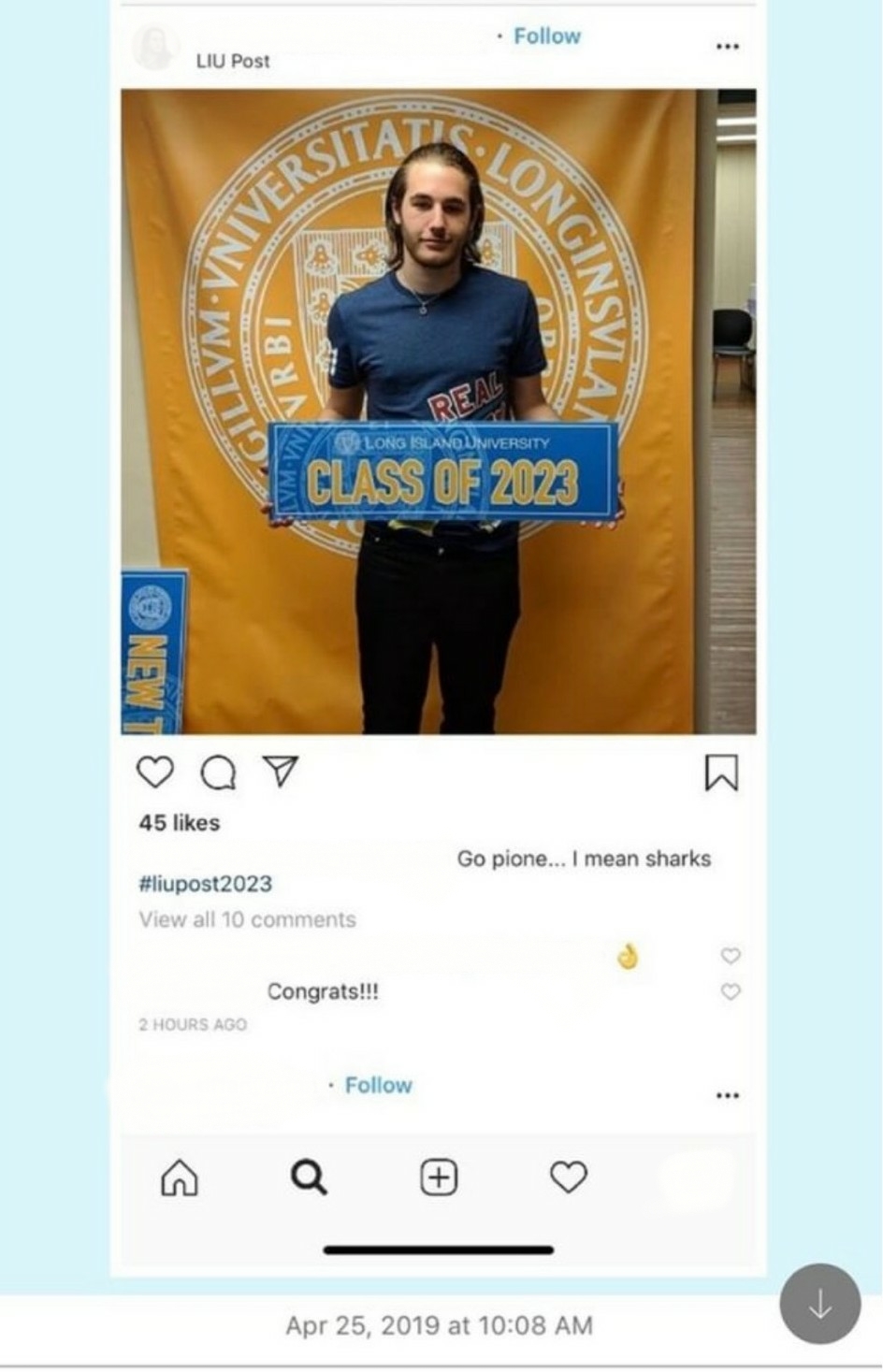 Are the LIU Sharks in Fresh Waters?

Editor’s Note: The Pioneer decided to redact the names of the incoming students and their social media handles to protect their interests.

The long awaited announcement of the new mascot for LIU’s athletic teams finally arrived, though it didn’t come as a surprise. Debbie DeJong, the university athletic director, sent an email to students on Wednesday, May 15 at 10 p.m., revealing that the new mascot will be…a shark.

The LIU Sharks was the winning vote from an email survey offered to students and alumni between April 23 and May 14. The other two options for a new mascot were the eagle or the falcon.

“It was great that all of our students and alumni got the chance to vote and have their voices heard,” DeJong said.

LIU will be the first Division I school on the east coast to have a shark as the mascot, according to DeJong. But just three days prior to LIU’s announcement, California State University, Long Beach, another D1 school, announced the shark as its new mascot as well. Suffolk Community College, which neighbors Post’s Brentwood campus, is also known as the Sharks.

Some students felt misled when they received the email survey in April because they were under the impression the new mascot was already decided upon. Their confusion stemmed from several social media posts by incoming freshmen athletes, which included shark references and emojis, and were posted back in February – well before the survey went out.

Written in the Instagram bio of an incoming football player was “LIU ‘23” followed by three shark emojis. In a post announcing his decision to attend LIU, a fourth shark emoji was placed in the caption underneath a photo he posted on February 6, which read “new chapter.”

The incoming freshman said his decision to use the shark emoji was only based on speculation by those he spoke with in the athletic department during a visit to Brookville’s campus, and he’s optimistic about the new mascot.

“I think it’s awesome that we’re the sharks now since we combined with the other LIU,” he said.

On April 25, another incoming freshman also revealed a reference to the shark in an Instagram post. Written underneath the photo of the student holding a Class of 2023 banner was “Go pione…I mean sharks,” leading students familiar with the post to label the survey as a farce.

“You have to get the LIU Sharks name trademarked, approval from NCAA, and have it on all uniforms and athletic facilities. You can’t do that with just three months left until the new season,” he said in an interview at the end of the spring .

The university’s athletic department is still in the process of fully fleshing out the new mascot, according to DeJong.

“It’s not as easy as you think it would be,” she said.

The athletic department first needs to complete the design of the shark before they can proceed with rebranding and marketing, along with repainting the football field and basketball court.

The Bethpage Federal Credit Union Stadium on Post campus was last renovated in the 2013-2014 school year. Starting in the Fall 2019 season, the away team’s side of the field will have brand new bleachers that match the home side.

“They were older and needed to be renovated,” Dejong said. “Depending on the weather, we’re hoping the seating will open up for the next season.”

DeJong added that they want the image of the Shark to fit among all communities on campus.

“[There can be] a Shark Tank for the fan section, [or things like] little fins, get your fins up. I think we’re going to have a lot of fun,” she said.

But not all students are happy with the change.

Germandinho Morales Jr., a sophomore finance major who played for Brooklyn’s soccer team, said the Blackbird mascot was an important aspect of what Brooklyn meant to current and former students.

“The field was called the nest; the basketball court as well,” he said. “Now there’s nothing connected with it because of the change.”

Only two players from the Blackbirds soccer team are returning for the fall 2019 season, which will now be made up of both Post and Brooklyn players.

“No one’s happy,” Morales said. “Most importantly, is the way the school went about it.” He isn’t one of the two players on the new roster, and he isn’t returning to LIU in the fall.

The announcement of OneLIU came last fall, which included the school’s decision to combine its colors into a unified gold and blue. According to Morales, the new color choices in correlation with the new mascot are a poor match. He said the combination of Post’s green and Brooklyn’s blue represent the shark better.

Gunnar Swierkowski, a Brooklyn graduate student working toward his Ph.D in Pharmacy, isn’t thrilled about the new mascot either. He said he’s a firm believer of “if it isn’t broke, don’t fix it.”

Although not an athlete, Swierkowski doesn’t see the need for combining the athletic departments. “I read in the New York Post that people were saying it [the Blackbird] was racist, I mean come on,” he said.

According to the New York Post’s article from May 16, a group of 12 former Brooklyn athletes and alumni met with LIU’s president, Kimberly Cline, to discuss their concerns, and recommended adding the Blackbird and Pioneer to the ballot. Cline turned down the idea because a marketing firm suggested to wipe the slate clean, according to a source the Post did not name.

Ivan Leshinsky (‘68) was one of the alumni to meet with Cline to suggest adding both the Blackbirds and the Pioneers to the survey poll. According to an open letter written by the alumni after the meeting, Cline declined the suggestion, saying “Pioneers would win.” The letter was signed by 10 alumni and represented hundreds of former LIU athletes and alumni.

Leshinsky and his fellow alumni started a petition group on Facebook called LIU Blackbirds Forever. The group has almost 900 members online, and hundreds more in support offline, according to Leshinksy.

“We’re going to continue to try and stir it up and convince [Cline] that this [the Sharks] is not a good thing for the university,” he said of the Facebook group’s purpose.

Cline has said on record that the unification of the two campuses athletic teams will help the university in terms of its national branding. But Leshinsky argued that national branding under the name the Sharks would take too long.

“The Blackbirds are already a national brand [and] has value in terms of economics, history and social. Blackbirds have national recognition and she needs to keep that,” he said.

Leshinsky believes there are many benefits to keeping the Blackbirds name, mainly being that it’s unique in D1 sports, gives coaches who are recruiting a legacy to point back to, as well as it’s emotional value to a network of over 1,000 alumni and LIU Brooklyn athletes.

DeJong said she understands that many of the students and alumni are upset, and that the university will still respect its past.

“The history books are there. They won’t disappear,” she said.

Dondre Lemon, who graduated in May with a degree in journalism, shared the school’s announcement with excitement.

“I like the shark,” he said. “First off, sharks are kings of the oceans, so us being a shark makes us a king/queen. That’s pretty dope. Don’t get me wrong, the Pioneers were amazing, but the shark is cool too.”

In the next few weeks, students and alumni can expect to see blue and gold merchandise on display in campus shops, but DeJong said the logo design has yet to be finalized before it can be put onto any merchandise.

LIU’s first game as the Sharks is scheduled for Saturday, Aug 10 at 2 p.m. when the women’s soccer team takes on Manhattan College at home. DeJong said, “We are ready and excited to start the fall.”