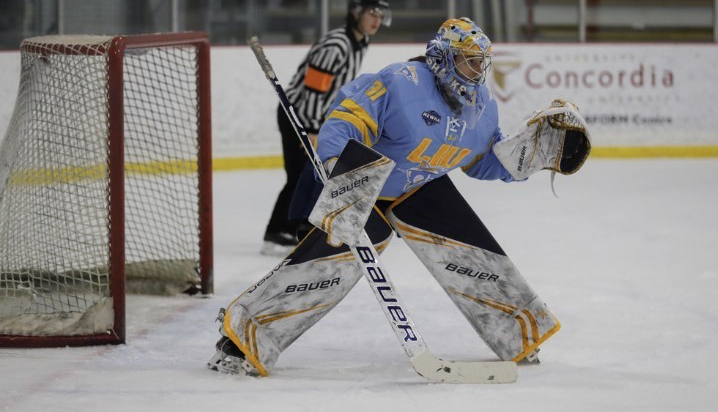 Athlete of the Week: Kenzie Harmison

Thanks to a skillful play by women’s hockey goalie Kenzie Harmison, the Sharks ended their inaugural season on top by earning the New England Women’s Hockey Alliance (NEWHA) title.

After Harmison’s first three game starts, head coach Rob Morgan was pleased to notice her progression. “Kenzie began to focus on what’s in her control while keeping a positive outlook on the process of development and being the best at getting better each day,” he said.

Morgan said Harmison’s winning play “brought a lot of energy to the team with save after save, which made the team want to work even harder, especially on the defensive side of things.”

Harmison was the team’s best chance to win, and her energy radiated throughout the team, according to Morgan. “Kenzie made many highlight reel saves, especially during the penalty kills and in the last three minutes of the championship game,” he said. “It takes everyone in the locker room to win, and for us to have great goaltending on top of everyone bringing their best was the difference in the outcome.”

Harmison was excited to come to LIU because it gave her the opportunity to play on an inaugural Division I team, as well as the school’s close proximity to New York City. “LIU also had a great film program for me, so being close to New York City was just a bonus at that point,” Harmison said.

Despite being such a young team, Harmison was confident everyone could come together for a common goal. “Everyone came from their own backgrounds all over the world, but at the end of the day, we have all grown up playing hockey,” she said. “We have learned for years that if you work hard, things will go your way. By the end of the season, our hard work was rewarded.”

Like many other athletes, Harmison encountered struggles throughout the season, but the work she put in was well worth the outcome.

“There were many ups and downs this season but in the end I gave it my all and worked to help my team game by game,” she said. “Knowing that the amazing coaching staff had faith in me to give them a chance to win felt amazing.”

Harmison’s focus was at a maximum in order to maintain her precision and intensity for three long games. “Being a goaltender is really a mental game. You have so much time to think but then when a puck is coming towards you, you have less than a second,” she said. “My team was playing well, I had confidence in them and knew I had a supportive coaching staff behind me.”

Harmison attributed her consistent rhythm throughout the tournament to routine play toward the end of the regular season conference. Her effort in the final two regular season games allowed her to stay in a groove all week.

There’s no better feeling than to hold the championship trophy, according to Harmison, who put everything on the line to give her team the best chance to win.

“It’s an absolutely amazing feeling knowing that you were able to play such a key role in such a historic event,” she said. “There is such a huge weight lifted off your chest at the end of games like these.”

Harmison was honored to be named tournament MVP, but also said she couldn’t have done it without her teammates behind her, and considers the award “just a personal bonus.” Her expectations are high for herself and her team going forward.