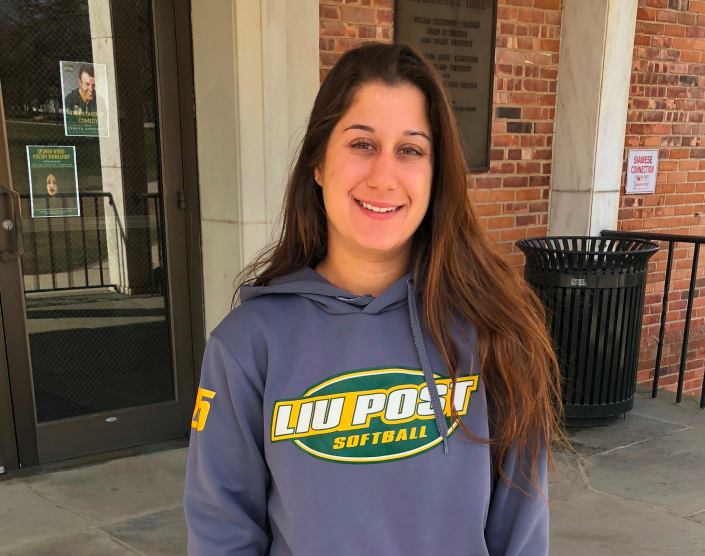 Athlete of the Week: Leah Mele


Leah Mele, a senior sociology major, is the middle infielder on the softball team and plays second base. So far, she had a great season.

Mele played baseball from the age of 3 to the age of 14, and she started playing softball in the seventh grade. Prior to becoming a Pioneer, she played on Longwood’s varsity softball team in high school, and on the LI Pride organization travel team. She also played volleyball and basketball.

Baseball was always important to Mele because her father was a baseball player. She started playing softball because she wasn’t allowed to play baseball as a female. Mele was able to play travel baseball for the Long Island but wasn’t allowed to play on her high school baseball team. However, after Mele started playing softball, she fell in love with the sport. She prefers softball over baseball because it’s a much faster sport and much more fun, in her opinion.

Mele looks up to and admires her brother, who passed away when she was younger. He was a baseball player as well. “I play this game for him and my mom [who] also passed away. Each game that I go out there and play are always for them,” Mele said. She wears her brother’s baseball number in honor of him when she plays

For Mele, the hardest part about being on the softball team is the amount of time and effort she puts into it every single day. The softball team practices almost , and will play in around 50 games this semester. It is also difficult because she has to miss a lot of classes, so it can be hard to keep up. However, her favorite part about playing softball is that it is a distraction from anything else going on in her life.

She also learns valuable life lessons from being on the team. “The team’s dynamic is family like. We are all sisters and will always have each others’ backs, no matter what.”

Mele considers her best game to be the one she played on March 24 against the University of Wilmington. She hit a home run against a regional opponent, which was a great accomplishment to her. To Mele, a successful game is one in which her team wins and gets at least two hits with no strikeouts at the plate, and makes no errors in the field. Mele has a deep love and passion for and intends to continue to work hard and keep on playing.

Published in Softball and Sports