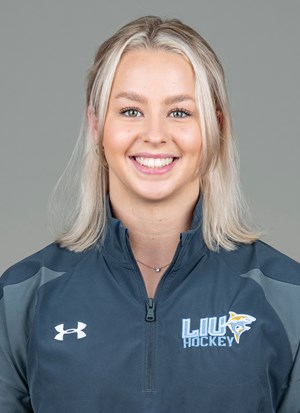 Athlete of the Week: Tindra Holm

As the LIU Women’s Ice Hockey season nears the playoffs, the team is fighting for its third consecutive conference title after winning it in each of their first two years as a program. The Sharks enter the final week of conference play in the New England Women’s Hockey Alliance (NEWHA)13-3-2 and will look for everyone to step up and contribute. It won’t be an easy feat, but Head Coach Rob Morgan has full belief in his group to come away with another NEWHA title. Led by freshman goaltender Tindra Holm, the team is excited to get back in the playoffs and make LIU proud.

Morgan touched upon what has improved for his team as the season unfolded.

“I think we’ve learned a lot about ourselves as a team and just how hard we can compete against some of the top teams that are in the country,” he said. “Being able to find a way to be consistent over three periods, that’s something that we’re learning, and I know that when we eventually put it all together, we’re a pretty fun team to watch.”

Morgan also detailed the team’s goals heading into the season after back-to-back conference championships, highlighting his plan for the talented freshman class.

“We definitely had the goal of finishing first in our conference and winning the tournament. When this class was recruited, they were recruited with the understanding that ultimately, our goal is to get to the national tournament, and we have a plan. This year’s part of the plan, next year’s part of the plan,” he said. “While they’re with us for four years, we’re going to continue to get better. We had a meeting all together, and I said you guys have to be prepared to compete hard, contribute, and be patient. They’ve been that, and along the way, they’ve gotten better, and they’ve now started to have quite an impact on the outcomes of our hockey games.”

In reference to star freshman goaltender Tindra Holm, he recalled the first time he had seen her play at the 2019 International Ice Hockey Federation (IIHF) U18 Women’s World Championship in Japan for team Sweden. He mentioned how Tindra had been a backup to previous goaltenders, but that coming to LIU allowed her to excel.

“Tindra has been playing at the highest level in Sweden, where a lot of the Olympians will go and play now that the Olympics are over, but she’s been playing a bit behind some of the star goalies that are older and aging out,” Morgan said. “So I think what’s been really special for Tindra is that she came in, she earned the starting job, and all of a sudden, she’s proven that she’s one of the best goalies in the country. Her training habits are as elite as they come, her commitment to getting better each day, making good choices and working out hard. I knew that this would be a great place for Tindra to open the door to the hockey world.”

Morgan said the team has its ambitions for the future, but it’s mostly a week-by-week focus.

“We talk about the big picture, but not often. It’s always about preparing for Friday. You can’t get a sweep on the weekend unless you win Friday, so that’s important to us,” he said. “Ultimately, we want to finish first, win the conference tournament and then take everything that we’ve learned as a team on and off the ice and come up with a plan to find a way to improve.”

Holm said it was former Shark Paula Bergstrom that made her consider playing for LIU back when the team first started.

“Honestly, a big part of me picking LIU was Paula. I played with her back in Sweden, and when she left to come here, she immediately texted me and said ‘yeah, you should come,’” she said. “Ever since then, I’ve been talking a little bit to coach [Morgan] and think this is a really good chance for me. As Coach said, I used to be pretty much a backup goalie in Sweden, but I always knew my capacity, and I feel like this is like me transitioning into a starter.”

When Holm was thinking about why the group was so successful, it was a simple but clear answer.

“We are a big strong group, we have a lot of fun together, and we can play some really good hockey when we all commit to doing it,” she said.

Being from Sweden, Tindra likes to spend her Sundays exploring the city that never sleeps.

“I like to go to the city on Sundays. I try to get someone to come with me, so I don’t go alone, but otherwise, I really like it [in the United States]. It’s a little bit of a change. I live in the forest back home,” she said. “My favorite part is probably the people, everyone is so social and welcoming, and I’ve gotten a lot of new friends.”

Holm also spoke on what it’s like receiving so many honors throughout the season, but insisted the results of the games are what matters.

“For me, the most important thing is winning and winning at the end of the season, but obviously, it’s nice to get some recognition for the work that you’re doing,” she said. “It keeps you motivated, and you know that you’re out there competing against the best.”

Holm has started in 26 games for the Sharks in her first collegiate season and has a 1.57 Goals-Average-Against(GAA) and a .941 save percentage in conference games. Holm has many accolades, including NEWHA Goaltender of the Week, NEWHA Rookie of the Week, National Rookie of the Month by the Hockey Commissioners Association (HCA) for November 2021 and has been named to the National Goalie of the Year Watchlist by the HCA.

Morgan also reminded that Tindra is a 4.0 student. Tindra looks to continue her good academics while pursuing an Olympic dream.

“I want to win the national championship here in college, and when I graduate, I want to go play professionally and represent Sweden in the Olympics,” she said.

Led by Morgan and backstopped by Holm, the LIU Women’s Ice Hockey team will look to keep taking strides forward, hoping to be once again crowned NEWHA Conference Champions.