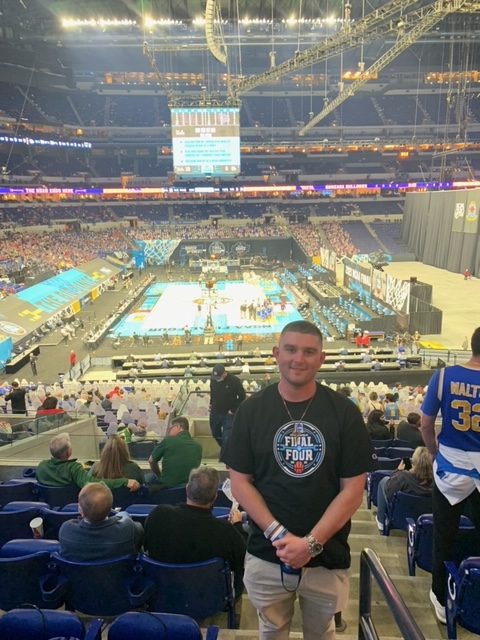 NCAA March Madness is here again, and it has been exciting with a few upsets from Oral Roberts, Northern Texas  Loyola, Chicago, Oregon State and Syracuse.

“Gonzaga will be on top at the end of the tournament,” he said.

The Gonzaga Bulldogs are coming off a huge overtime buzzer-beater win over the UCLA Bruins, rolling into the championship game to play #1 the Baylor Bears.

Caffrey believes it was a shock that UCLA made it that far.

“The biggest bracket buster Is UCLA,” he said. “They were an 11 seed that made it to the Final Four, and they beat Michigan.”

Anthony Gambino spoke about how he had Michigan to Win.

“UCLA pulling that through was huge. I couldn’t see Michigan losing,” he said. “UCLA was the biggest bracket buster, and I doubt anyone had them unless you are a fan.”

On Monday, April 5, many waited for after the cancellation of the March Madness tournament last year due to the COVID-19 pandemic. It was finally the championship game. The teams lucky enough to make it were the undefeated Gonzaga Bulldogs and the underdogs, the Baylor Bears, who faced off in a seemingly lopsided battle.

In this case, the Baylor Bears were the bigger threat on the floor. Gonzaga’s performance was disappointing to fans after coming off of an impressive win against UCLA in the Final Four with frontman guard Jalen Suggs’ buzzer-beater for the win. It was unfortunate for Gonzaga fans, but it was great for people who always root for the underdog.

Senior sports management major Eddie McQuade got the opportunity to work at the Final Four down in Lucas Oil Stadium in Indianapolis, Indiana.

McQuade said his favorite moment from the event was watching UCLA’s game-winning shot in person.

“I got to witness Jalen Suggs hit a buzzer-beating three from 33 feet away to save Gonzaga’s perfect season and send them to the national championship. That game alone was easily the best of the three games, and that shot is gonna be talked about forever,” he said. “Jalen Suggs just had ice water running through his veins because to hit that shot as a true freshman and to be that cool under pressure. I don’t think any other freshman in that situation would be able to pull that shot off.”

McQuade thought the area was perfectly fitting to hold the event after all the unforeseen circumstances that lead to its cancellation last year.

“One thing I’ll always remember is how beautiful Indianapolis is. The city is so clean the people always take care of it,” he said. “Lucas Oil Stadium is also a nice stadium, and the way the stadium is built, you’ll realize how much the stadium represents the blue-collar culture of the city.”

McQuade loved the thrill that the fans brought to the event.

“The atmosphere was like the super bowl to an extent. Seeing so many people from all over the nation was a sight I loved seeing since we’re not used to large crowds,” he said. “The fans were all very polite, and the celebrities in Indy are all people who will take time to talk to you if you choose to talk to them. Even outside the stadiums at bars and restaurants, the locals loved bringing in the tourists, and I think this is exactly what every major city in America needs right about now to get back on their feet.”

McQuade thought the intensity of the crowd was unlike anything ever seen.

“The crowd’s energy was fantastic. During the national anthem, it was impossible not to get goosebumps while listening to it, and you can feel how into the game everyone was during the UCLA Gonzaga game. You can feel the heartbreak for the Bruins and the pure joy for the bulldogs when Suggs called the game,” he said. “During the championship, you can feel both teams being hungry for their first National Championship. As soon as Baylor started pulling away with the game, I had the privilege of getting the first look at the Bears championship gear as I had to deliver it to the merchandise stands. Seeing thousands of Baylor fans rush to the lines to get their merch was a pure adrenaline rush, and I hope to relive that same energy at sporting events in the near future.”

McQuade got the position to work concessions and sales through a friend he met while working at the Super Bowl with the organization ‘Living Sport’. He claimed that no one was taking cash and that the fans could pay for anything with a card. McQuade also believes this could be something we see going forward.

With Baylor Coming out on top, beating Gonzaga 86-70 for the National Championship, March Madness and the College Basketball season came to a close.