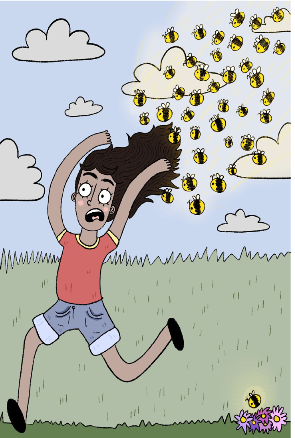 Bees on Campus Have Students Buzzing

Many students are running away in fear as swarms of bees and wasps follow them around campus. These sly stingers are wreaking havoc indoors and outdoors, and either way, students and faculty can’t escape them.

From the dorms to the classrooms to the patio areas, families of wasps are hiding out in crevasses while they eye the sweetened drinks in hands of passersby. Students attempting to study or eat their lunch in peace are continuously interrupted by their presence.

The yellow and black flying insects showed their faces Monday morning while Pamela Garcia, a freshman health science major, stopped to grab breakfast with a friend. “My friend got coffee and the bees just started coming,” Garcia said. They had no choice but to scream and run away.

Another friend of Garcia’s, freshman biology major Krystal Mahase, also encountered wasps since she began classes. “I’ll just be sitting here, and they’ll tell me there’s a bee behind me, and I’ll just start screaming,” she said. Screams are heard all throughout campus because of the insect, according to Mahase. “I scream just like that,” she while referencing another student’s shrieking in the background due to bees.

Student complaints about the bees and wasps don’t go unnoticed, and some may not realize the school’s maintenance and facilities team are often tending to the problem. “As soon as we receive info through a work order, we deploy an exterminator and address the issue right away,” said Executive Director of Facilities, Roy Fergus. “For instance, there are high areas to get to, so you’ll see around or that we use to treat areas at any height.”

But the infestation of bees and wasps are also in areas where students may find them difficult to avoid. Destin Trammell, a senior speech and language pathology major, said the bees were a nuisance while trying to do school-work in the Head Quarters computer lab in Hillwood Commons.

“I see the bees flying near the ceiling and they were flying into the light fixtures, and when they would get hot, I guess, they would just fly back down,” she said. “We were printing in this area and they were swarming right over and around it,” she said. In addition to bees buzzing around the heads of students concentrating on their work, there are numerous dead ones scattered on the floors of the lab and the hallway that leads to it.

Dominique Williams, a senior health science major who plays for the women’s basketball team and lives in Brookville Hall, said she hasn’t been stung yet, but was chased around a couple of tables.

“I know last year when we would be in the gym a lot, there would be bees around the court. There would be physical bees, dead bees, on the court,” she said. “I know my teammate got stung last year in front of Winnick, and this year there were bees in my dorm room,” she said. Williams notified the custodians about the bugs, but they told her the bees were getting in because people left the doors open.

The Center of Healthy Living confirmed at least one student a week visits their office because of a bee sting but couldn’t confirm an exact number or the procedure they follow when tending to students to them. When the Pioneer asked the center for advice on how students can tend to a sting on their own, or what a student with a bee allergy should do in case of emergency, they declined to comment.

Towards the summer and spring months, the presence of bees and wasps are inevitable, according to Fergus. “It’s just the nature of our campus,” he but reassured that every week, an exterminator applies a controlled, green level application to remove the buzzing pests. He consults with his staff regularly as to where bees have been spotted and his best to ensure the campus remains a safe and environment.