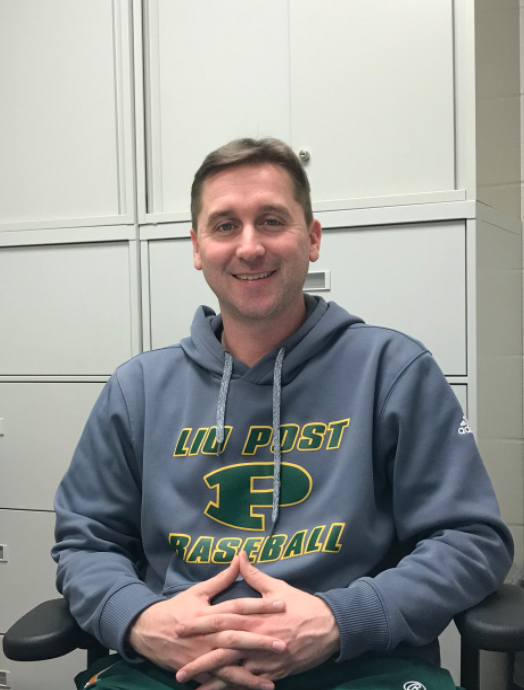 Catching up with Coach Gaffney: High Hopes for Baseball Season

After a successful season last year for LIU Post’s baseball team, with a record of 32-20 and for the first time having a player drafted professionally for Post’s baseball team since 1994, Head Coach Michael Gaffney has high expectations for the team this season, despite the graduation of some of the team’s big guns. Although last year’s roster was more experienced, Coach Gaffney said that there is a lot of talent on this year’s roster, which will make the upcoming season “very interesting.”

The Pioneers will no longer have Dan Jagiello as their closer. Jagiello was drafted by the Los Angeles Dodgers in the 34th round of the 2017 MLB Draft. Jack DeCarli, who was the starting pitcher for most of his career on the baseball team with a record of 10-3 last season, has also graduated. Gaffney compared DeCarli’s pitching style to Chicago Cubs starting pitcher Kyle Hendricks because Hendricks doesn’t overpower hitters with his fast-ball velocity, [but he just had command on other pitches like his slider, which is a pitch that curves diagonally when thrown but with more velocity than a curveball which curves downward].

Even though those two players are gone, Gaffney is still more than con dent that this year’s team will succeed because they have new talent and veterans with experience winning after a dominant season last year.

This year’s lineup is well rounded; usually the hitters in the lineup who bat after the 6th hitter aren’t as productive offensively, but for this lineup, their hitters at the bottom end of the batting order still pose a threat because of their speed. Gaffney said they will do something as risky as a bunt but will still get on base for an in field hit.

While Gaffney emphasized offense, he is still able to keep his players sharp defensively. Even though the stats say otherwise, accumulating 65 errors last season, it’s because The Pioneer’s home field is grass, so the ball will skip more, while most teams now have incorporated turf fields which makes fielding easier because turf is essentially just carpet.

Looking at last year’s record, The Pioneers were very streaky, meaning they won around five games straight, lost a couple but bounced back and dominated. Gaffney described that as “peaks and valleys.” This season, he wants to extend the peaks and limit the valleys. There was a stretch when the team lost 8 of 12 games, but they were able to come back from that drought together as a team.

Gaffney expects nothing less than the team he coached last year, which means you, can expect a great season again for The Pioneers. Practice began last week and their first game will be Feburary 16 at Limestone College and their first home game is on March 19 against Adelphi.