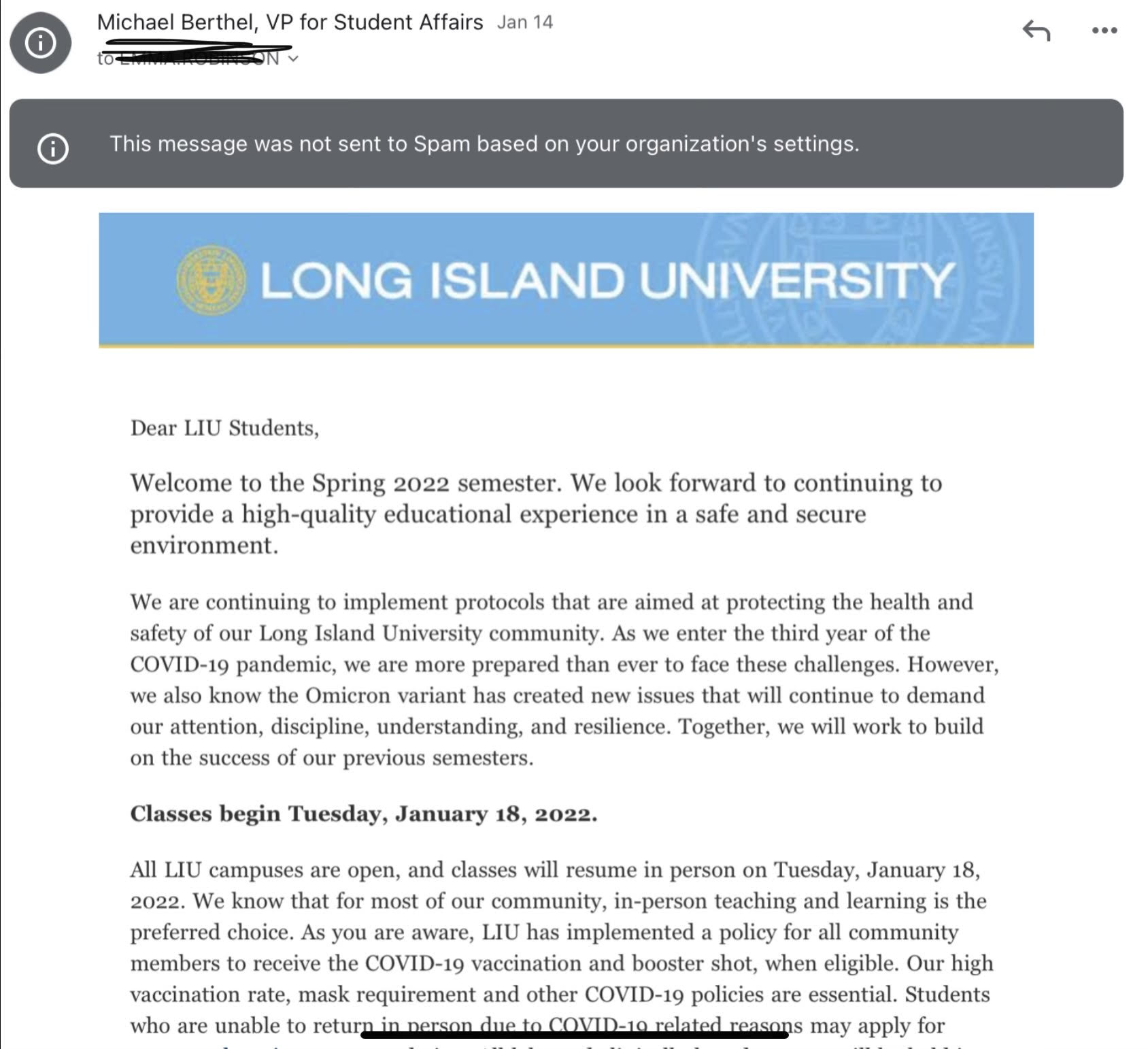 As residents prepared to move onto the Post campus for the spring semester, multiple emails from administrative officials shocked students.

“I received the message four days before my move-in day, and I didn’t think that was timely at all,” sophomore writing and theatre arts major Ejay Pegg said. “I was really mad … I was immediately trying to contact the school to understand why they would tell us so late.”

Despite having COVID-19 rapid tests on campus, the university did not tell many students that were struggling to get a test for move-in.

“I emailed a few people at school …. And they didn’t get back to me until the day of move-in, and they told me that COVID tests are being offered on campus,” Pegg said. “I don’t know why that wasn’t public information.”

Sophomore criminal justice and forensic science major Anabel Barlow asked school officials for help, and was not informed that the Center for Healthy Living on campus would be able to administer a COVID-19 test.

“I arrived early on Jan. 14, and I was only notified [that I needed the negative test] two days before. I told the school that there was no chance of me getting a test because I was in California,” Barlow said. “Rapid test [appointments] in urgent care were completely filled up. Walgreens and CVS spots were booked until the 20th. So, I emailed and called the school to say there was nothing I could do [to get the test]… the school said to just try and get one. Then, the day I got on the plane, Trey [the resident director for Post residence hall] said that I could spend the night in my dorm and then go straight to an urgent care the next morning and get a rapid test. It was a whole mess, and I had to pay $30 for the Lyft to get there and back.”

Some students did not know whether Post had a plan for students who tested positive for COVID-19 this semester.

“I didn’t know if I was going to be able to come [to campus], and I had a plane ticket,” Barlow said. “I couldn’t get a refund, my plane had already been delayed and switched because of COVID. And coming from across the country, I don’t have friends or family here. There’s nothing else I can do, but come to the school [to live]. So, if they didn’t have anything lined up for me, I would’ve been homeless.”

While it was a struggle for many residents to get an appointment with only a few days notice, the move in process was reported to be typical by students. Resident Assistants (RAs) greeted residents at the front of their building as they arrived, and asked for proof of a negative COVID-19 test and vaccination card before giving students clearance to enter their hall. However, some students at Post hall entered without the knowledge of the RAs, potentially exposing other residents to COVID-19.

“Someone in the dorm had a family member in public safety that let them in without any tests at all,” Barlow said. “They bypassed the RAs completely, had their room code and got in. The RAs didn’t know they were in the dorm until hours later. [They] didn’t know what their COVID status was, either.”

A student that will remain anonymous reported that they felt unsafe moving in when another student entered their dorm before receiving their rapid test results. The student then received positive test results for COVID-19.

“Upon my roommate and I moving in, one of our friends came to visit us in our dorm. At the time, I assumed [our friend] had received his COVID-19 test result because he was allowed in the dorm. He hugged me when he came in, and was in the room for about 10 minutes. He told us that he was still waiting for the results, and then abruptly left after getting a phone call from the Center for Healthy Living (CFHL) with a positive result. My main concern is why would someone be allowed into the building when they had not yet received a COVID test result? I felt nervous and anxious for myself and my roommate because we might have been exposed.

I didn’t know if I would expose my peers and classmates, so for the remainder of the day, my roommate and I wore our masks everywhere, sanitized our room and did not leave our building. My roommate called the COVID-19 hotline and the Center for Healthy Living. The CFHL did not answer, so we reported what happened to two RAs and explained the situation to Trey Pogue, our resident director. Trey Pogue told us that he was not too stressed about the situation because we are vaccinated and to monitor for symptoms. We did not have to quarantine.”

Students were not notified of these occurrences by the university, and were irritated by the possible exposure.

“It’s so hypocritical because [the university] is acting like they are taking all these measures, and then you find out that they’re really not enforcing it much,” Pegg said.

While some students felt stressed moving in and starting classes amid these delayed emails, Berthel’s message assured students that Post is ready to prepare students to again be in-person this semester.

“We are equipped with a high vaccination and booster rate, a steadfast commitment to following safety protocols, and an individual pledge to protect each other and our University community. Together, we look forward to a successful and safe spring 2022 semester,” Berthel said.

However, students feel that response from university officials is not enough to address the lack of communication.

“I feel like there was no consideration for people who live in areas that don’t have access to testing, or people who can’t get access in that timeframe,” Pegg said. “I feel like even when [students] complain, it feels like it gets brushed off a lot. It feels less like a learning environment and more like a business … I really don’t feel like the school prioritizes every student. I think they value the students that can give them either money or something they consider valuable, like an athletic skill.”

Chief Operating Officer Joe Schaefer and VP for Student Affairs Michael Berthel were reached out to for comment, but have yet to respond. This story is ongoing.