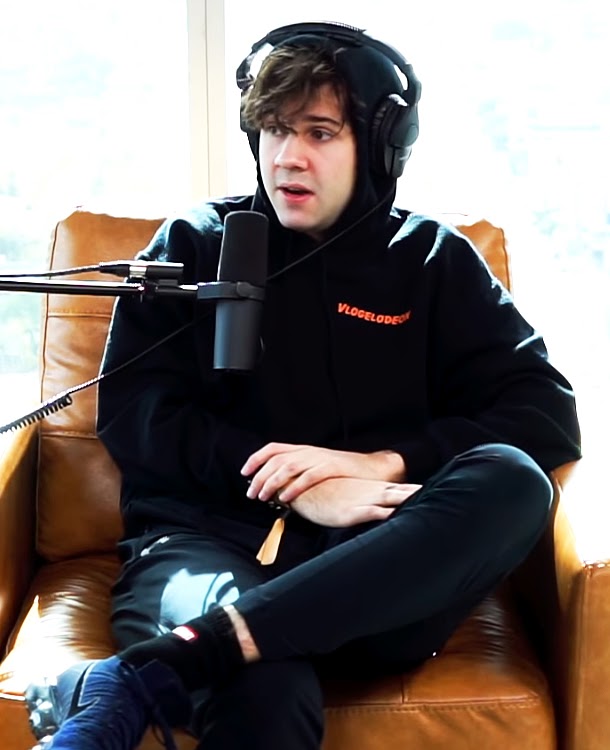 David Dobrik: To be Forgiven or Forgotten?

David Dobrik is a Youtuber with over 18 million subscribers, and a net worth of 20 million. Dobrik’s devoted fan base can be seen wearing ‘clickbait’ merchandise, and using the app Dobrik’s team developed, known as Dispo.

Dobrik began his career on the app formerly known as Vine, where he quickly gained hundreds of thousands of fans. He moved his content to YouTube, and his fans followed.

Dobrik’s YouTube videos follow specific guidelines that are replicated with every video. He makes short four minute and 20 second vlogs with his friends, he often featured celebrities like Olivia Jade and Howie Mandel in the videos.  His fans named the recurring people in the vlogs, the “Vlog Squad.”

Dobrik and his friends hang out together, go to parties and even pull a prank or two in the vlogs. This content seems relatable to Dobrik’s young fans, which encourages them to tune in every time he posts.

Over his career, Dobrik has had a few scandals. One that is notable is how he treated former “Vlog Squad” member Seth Francois.

In interviews, Francois has stated that Dobrik played pranks on him that were racially motivated, and one that was classified as sexual assault.

“I honestly didn’t realize how much that situation affected me until the beginning of last year when COVID happened,” Francois said in a Buzzfeed article.

Francois has since left the squad, and has been working on his own personal company.

None of Dobrik’s scandals  had been in the public eye as much as the allegations Dobrik is facing now.

On Mar. 16, Insider reporter Kat Tenbarge published an article containing allegations of sexual assault against a member of the “Vlog Squad,” Dom Zeglaitis.

Though Dobrik is not the one being accused of the act, he has been accused of enabling and providing an environment for it to happen, as well as putting it in a vlog on his channel.

Dobrik has responded to the allegations in the form of two apology videos posted on YouTube.

The first one came out the same day as the article, and has six and half million views. In the short video, Dobrik acknowledges that people can change their minds when it comes to consent, something he says is very important to him.

He also mentions Zeglaitis, stating he is no longer friends with him. “I’ve chosen to distance myself because I don’t align with some of the actions,” Dobrik said, despite having videos on Youtube with Zeglaitis from one year ago, after several women had publicly accused Zeglaitis of sexual assault.

Comments were turned off on the video Dobrik titled “Let’s Talk.”

In the following days, brands that sponsored Dobrik began to drop him.  Dobrik  lost 13 brand deals, including Chipotle and SeatGeek. Brand deals are Dobrik’s main form of income.

On Mar. 22, Dobrik posted a longer video in which he states that he believes the victims, and is going to step away from his platforms for a bit.

Many people in the comment section question if this newfound accountability is due to his loss of sponsors.

“I wasn’t surprised at all when I heard the rumor that there was some sort of allegation,” University of Southern California student Sophie Hankes said.

Hankes has met Dobrik, and the “Vlog Squad,” two separate times. The first time was on her first day moving into USC in 2018, and she couldn’t have been more excited.

“I watched his videos everyday before I went to bed, everyday that he posted,” Hankes said.

Hankes had been a long time fan, and let Dobrik know this. He seemed uninterested and awkward.

Fellow “Vlog Squad” member Heath Hussar was with Dobrik, and was smoking a cigarette. When Hankes was talking to them, he blew cigarette smoke into her face.

“It was exceedingly rude and completely unnecessary,” Hankes said.

The second time Hankes met the group, they used her to get into a party. Once they got in, they walked away from her without saying anything.

“It was strange the way he treated us, it was strange that they were coming and hanging out with a bunch of 18 and 19 year old girls, I felt really uncomfortable,” Hankes said.

“When you meet him in person, it seems almost clear that it’s a business,” Hankes said.

“I think that we’re way too quick to forgive big creators because they’re big creators and we look up to them, but having money doesn’t excuse you from making terrible decisions,” Hankes said.

Being based in Los Angeles, there is always a chance Hankes will run into Dobrik, something she hopes doesn’t happen a third time.

Students on campus are also reacting to the allegations.

“I was not shocked, I haven’t been super fond of David for a couple years just because I feel like the way he conducts himself is rather odd,” junior acting major Aubrey Shadle said.

Shadle used to watch Dobrik’s vlogs, and has kept up on every aspect of the YouTube drama. They also recall watching the specific video the allegations are about.

“I remember watching that video and being like ‘this doesn’t seem right,’ but like I’m sure it’s all staged,” Shadle said.

In the Insider article, the victim claims that the event was not staged, and they never planned on anything happening.

“I think he’s getting emotional, I think those are real feelings, I just think that’s about him losing his career,” Shadle said.

In the second apology video, Dobrik talks about how he can’t imagine a childhood friend like Zeglaitis doing something like this.

“Guys aren’t willing to hold their friends accountable when many many women step forward,” Shadle said.

Many people have condemned Dobrik for not believing Zeglaitis would do this, even when he has had multiple allegations against him in the past.

Shadle believes people can change, but not overnight.

“There has to be evidence of time, education, learning and growth,” Shadle said.

Many of Dobrik’s fans are young and impressionable, therefore he sets a standard for many. Both Hankes and Shadle hope he will work and learn to do better.