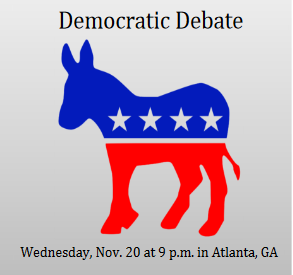 MSNBC and the Washington Post will host the next Democratic presidential debate on Wednesday, Nov. 20 at 9 p.m., at Tyler Perry Studios in Atlanta, Georgia. Thus far, ten candidates qualified to battle it out and further establish themselves as the right man or woman to take on President Donald Trump in the 2020 election.

A certain criteria was met by Democratic hopefuls in order to qualify for the debate. Each candidate needs 165,000 unique donors, and a minimum of 600 unique donors per state in at least 20 states. To meet the polling threshold, candidates must meet one of two options: they can poll at three percent or higher in at least four different sponsored national or early state polls Iowa, New Hampshire, Nevada and South Carolina or they can poll at five percent or higher in at least two single state polls from two of the four early voting states.

Two candidates that participated in the fourth debate last month won’t be returning for the match-up in Atlanta. Former congressman Beto O’Rourke unexpectedly dropped out of the race early, and former HUD secretary Julián Castro fell short in the polling threshold.

A crowded debate stage creates little opportunity for candidates to present their ideas in depth, according to Jeremy Buchman, associate professor of political science and pre-law advisor. With the Iowa caucus just under four months away, a strict and impartial set of qualifications are needed to diminish the talking-over one another and the disregard for time limits.

“If anything, the Democratic National Committee has bent over backwards to be fair to the detriment of the caliber of the debates. The DNC doesn’t want to be criticized for allegedly placing a thumb on the scale for any candidate, as Bernie Sanders’ campaign had alleged had happened in 2016,” Buchman said.

This is the fifth of 12 primary debates set to take place before the first primary vote in March 2020. As donors and pollers weed through the herd of candidates, the apparent divide between liberals and moderates grow.

Left-leaning hopefuls like Sanders and Warren continue to go head-to-head with the more centered candidates such as Biden, Booker and Klobuchar over key issues like health care and student debt.

A socialist ideology remains a turn off to older and more moderate to conservative voters, according to Buchman. Some worry that a separation of the Democratic party is a loaded talking point for Republicans who repeatedly play the socialist label card by attaching it to politicians and policies for the last 90 years.

“Socialism is a toxic label in American politics,” said Michael Soupios, professor of political science. He believes much of this strategy feeds off of a serious misconception. “The average American makes little or no distinctions between socialism and communism with the result that when they hear the term ‘“socialism”’ they think of the Soviet Union with all of its heavy-handed abuses,” he said.

Many belonging to the younger generations who carry the burden of student debt, climate change and gun violence are in search of reform, and policies generated by left-wing candidates appeal to this dire need of change.

But, senior broadcasting major Griffin Ward, who works behind the scenes at a major news organization and collects content from essential Sunday morning talk shows, has become familiar with the ideology of each candidate. He understands that the country is deeply polarized right now and there’s a silent majority out there primarily made up of Trump supporters who are opposed to these sorts of changes.

“I think it’s too drastic of an action to make. It’s riding the ship too hard the other way. I think there’s gonna be needed time and some mini changes in order to ease into it, but right now, I think with Trump’s political presence and his words which are basically gospel in a lot of the country, I think it’s too polar opposite of what socialism is and people don’t like change,” Ward said.

None of the Democratic candidates are actually putting forth a socialist policy agenda per se, according to Buchman.

“Bernie Sanders calls himself a democratic socialist, but his platform and Elizabeth Warren’s, for that matter could be more accurately characterized as a New Deal on steroids,” he said.

As Soupios stated, progressive ideas can be misconstrued, and many fail to notice that Social Security, Medicare and Medicaid are all socialist programs to which American taxpayers contribute.

On the contrary, Soupios also called attention to the perils of “Big Brother” or the “State” and credited conservatives for warning Americans of the consequences which may derive from an Orwellian like state or “big government.”

“America needs to be concerned with another ‘“big brother”’ an ugly, plutocratic relation with his hands all over the Corporate mechanisms of America,” Soupios said. “In fact, the ‘“Corporate Big Brother”’ may even be more of a threat than the State in the sense that big business has increasingly demonstrated a capacity to buy up the government itself.”

Many of these points will be thrown around the debate stage from the likes of Sanders, Warren and Steyer who preach about the dangers of corporate greed and wealth. Yang will likely defend his plan to give every American $1,000 dollars per month to prevent an economic downturn as robots replace humans in the workforce.

And if the remaining candidates, with the possible exception of Buttigieg and Gabbard, stick with their previous debate rhetoric, then Biden will likely be on the other end of their firing squad, rather than at the elephant that remains in the room and is waiting to be noticed President Trump.

“Given this situation, what we need is less ideological blathering right vs left and more appreciation of the fact that the corruptions of power constitute an existential threat to everything we hold dear in our political system,” Soupios said.