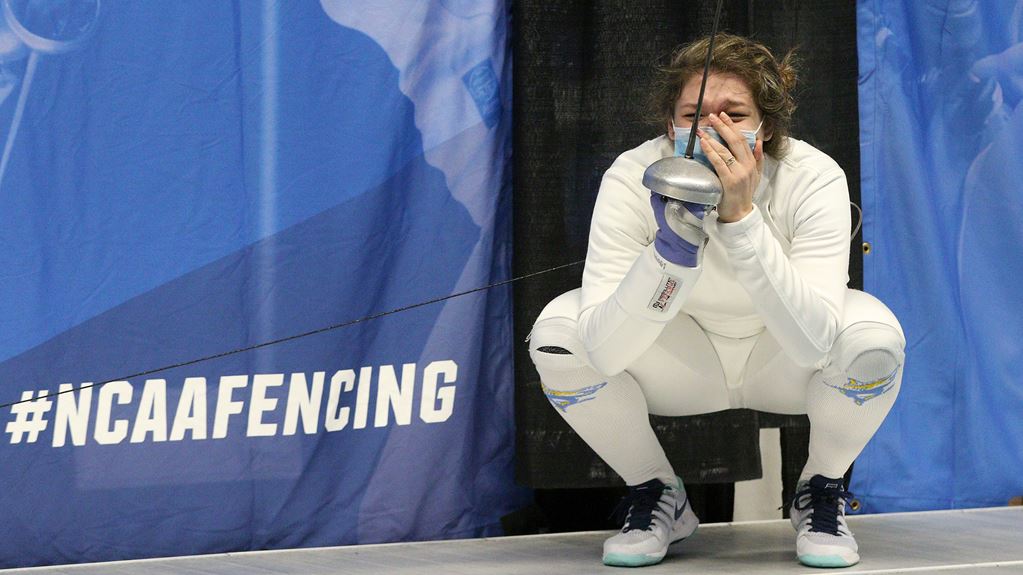 Freshman Laura Fekete made history when she won the Fencing NCAA National Championship in Epée, becoming the first national champion for the Sharks in program history.

The championship was held on Saturday and Sunday, March 27-28, in State College, Pennsylvania. Three Sharks were selected to compete in the tournament. Anna Szántay finished 12 of 22 in Foil, and Chejsa-Kaili Seck finished 11 of 24 in Sabre.

Head Coach Ivan Lee had great things to say about his team, especially after the adversity they faced throughout the season.

“It went very well. We battled several quarantines, injuries and a shortened schedule, but still finished with a winning record, three All-Americans and a National Champion,” he said.

Lee is very proud of the three fencers who competed the weekend of the tournament.

“They all fenced very well, and I’m sure that they will draw from this experience to continue putting up stellar results in the future,” he said.

Fekete was very confident after finding out she was selected to play in the championship.

“I was expecting it, I did really good in the regular season, but I was still happy to see my name on the list officially,” she said. “I was looking forward to the competition. I was excited about it.”

Fekete knew she had to keep a strong mentality going into the initial rounds of play.

“I knew I had to be as untouchable as I could because not only the wins but also the touches I got counted,” she said. “Even though I did not finish the poles as I wanted to, I still got into the top four, which I wasn’t even brave enough to dream about.”

The opening five rounds were split with the first three on Saturday, and the last two Sunday morning, the top four from each competition played in the finals Sunday afternoon.

Fekete did not play as well as she would have hoped on Saturday but kept her confidence up to compete at her best all Sunday.

“I finished the first-day seventh on the list. I had mixed feelings about this, but mostly I thought I did not have any chance left to make the top four. I remember talking to my mom, saying I’ll be happy if I stay in top eight, coming home with an award,” she said. “When I saw my name on the third place after the poles, I could not believe it. I called my mom again, crying, she picked up crying.”

Fekete knew she did want to miss the opportunity she had right before her when the round-robin kicked off.

“When the finals came, Ivan told me that all I had to do was enjoy fencing. One thing about me, I am really competitive, so I did exactly what I was told to do,” she said.

Fekete played the top two ranked finishers in the finals. She knocked off the #2 qualifier Miriam Grady 15-13 and then defeated the #1 ranked player in the tournament, Kaylin Hsieh, in the final round. The judge confirmed the final touch over replay review to give Fekete the 14-13 win and the title. Both Hsieh and Grady are from Notre Dame.

Fekete had a mix of immediate emotions when she realized she won.

“I screamed as I usually do after giving a touch, and then I started crying,” she said. “I did not believe and cannot believe until this day that I won.”

It means a lot to Fekete to have made such a significant impact on her team and Shark history so early on in her collegiate athletic career.

“I did not know until just later after I won that I was the first one to win a national championship for the school. I feel extremely proud, and I feel like I already proved to the school that it was the right decision to sign me,” she said. “I am really happy I could put the LIU fencing program on the map, hopefully attracting more talented fencers to the school, making Shark history even brighter, more known and more feared among other schools.”

Fekete claims Coach Lee and her upperclassman teammates by her side played a huge role in all these achievements.

“Ivan helped me with everything he could. He was always by my side. My teammates always supported me, cheered on me, helped me at practices with preparing,” she said. “Ivan arranged my preparation by helping me go to a strong club in the city, where I could fence with members of the USA team and other college fencers.”

Fekete loved the experience and everything she took away from it.

“I really enjoyed the competition, but I think the most important thing I took away is the lessons it taught me about what I need to focus on more when fencing. The competition pointed out things about my fencing that I never really used and knew. This led me to win the competition,” she said. “I learned that I have to get out of my comfort zone and believe in what I do to be able to give my best. Apart from just looking at myself fencing in the competition, it was really good to see how my teammates were cheering for me, even some people I didn’t even know, in the finals.”

Fekete has been fencing since she was eight years old when a few recruiters came to her primary school, and she has loved the sport ever since.

Anna Szántay was very excited when she found out she was selected to play in the championship as well.

“I felt like I was above the ground! I was happy and started to inform my family members and my friends what I have achieved,” she said.

Szántay always enjoys the thrill of the competition but always remembers to take it all in and enjoy it.

“I had this kind of experience before when I was a European and World Championship participant, but this time I was more relaxed than ever before. I had nothing to lose, and I was eager to fence with the others,” she said.

“Going to NCAA’s has always been one of my goals, and I was extremely excited to hear I qualified. I felt very accomplished and blessed that the work I put in paid off,” she said.

Seck enjoyed being a part of the tournament.

“Being at the championships made me very happy, especially after not having fenced in a competition like that in a pretty long time,” she said. “Being back in that setting made me remember how much I love fencing in competitions.”

Seck is very pleased with the way everything turned out and is looking forward to the future.

“Having performed well at championships made me happy to be a shark and want to continue performing well for my team as well as the school,” she said. “The memories that I made with Laura, Anna and Ivan are some that I will cherish forever.”

“I have experienced a lot of new and interesting things. The vibe there was more like a celebration than a competition. The people were amazing. I have already had a good connection with my teammates, but we are more bonded now than ever with Chejsa, Laura and even with the whole team,” she said. “They supported us while we were there, and it gave us energy, and of course, I have learned that LIU has the best coach of all time. He is a character, and we are so lucky to have him here.”