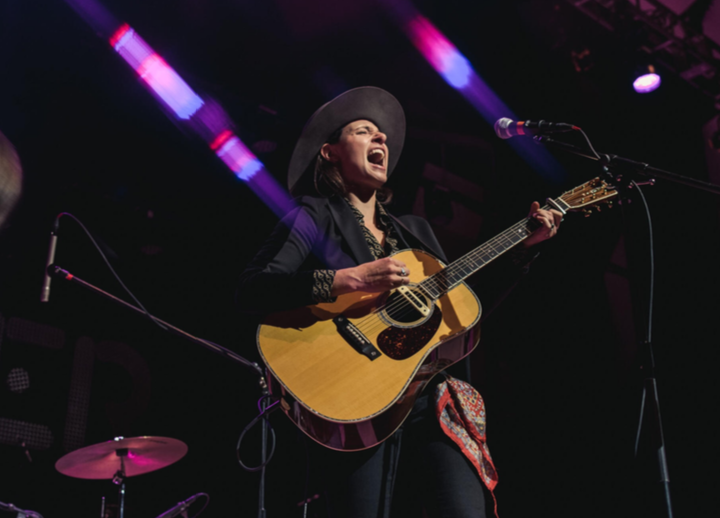 “It was surreal to be honest with you, I can’t wrap my head around it,” Hunter said. “It’s always been a dream of mine, I’ve always loved rock and roll,” she said, comparing her experience on stage to the video game Guitar Hero. Hunter completed the first two years of her audio design degree at Post before transferring to Montclair University and graduating in 2016.

Music has been a passion of Hunter’s since she was young; in middle school she was the star of an all girl band, the Rhetorical Questions. “I was always a little more serious than the other girls, I knew how hard it was at that age to all be on the same page, that [was] when I started writing on my own,” Hunter said.

For Hunter, music was a form of release, and although the time and effort is challenging, she is incredibly thankful. “At the time [when she began her career] I was a very shy and private person, so I started writing songs about myself and then it just blossomed from there,” she said.

Hunter often turned to music during tough times in her life. Music was her main outlet, although it wasn’t easy. “When you start writing you’re a little shy about it, giving somebody your work is so vulnerable,” Hunter said. “I’ve learned throughout the years that the more you share, and the more vulnerable you are yourself, the better you become at your craft.”

Having worked as a performer for two years, Hunter realized that people want to help and see an artist succeed. “People aren’t that harsh, music is something that connects us all, so everyone wants to be a part of it, they want us as musicians to do well for ourselves,” she said.

It’s thanks to her family and long term girlfriend Sage who pushes her to achieve more. “She keeps me grounded, she’s always there by my side, telling me you should change this lyric, she’s helped me with instrumentals,” Hunter said, adding “she’s not just my girlfriend but she’s a person who gives me honest feedback.”

Hunter plans on growing her fanbase and creating more music. At the end of May Hunter is heading to Dreamland Studios, an old reconstructed church, to spend time working on her latest single “Let Me Burn.”

“I find this song super important because its really a pivotal song in anything that I’ve ever written, I think my songwriting has come into fruition,” Hunter said. “I starting to see parts of it that I’ve always been a little scared to show people, this ones a rock and roll, gritty song and I’m just so excited to get it recorded.”

In the next five years, she wants to incorporate more of a band in her music. “I just have so much fun on stage with other people, and just rocking out. I want to have a concrete band that comes and travels with me, and have a full album, not just an EP, with pictures and everything.”