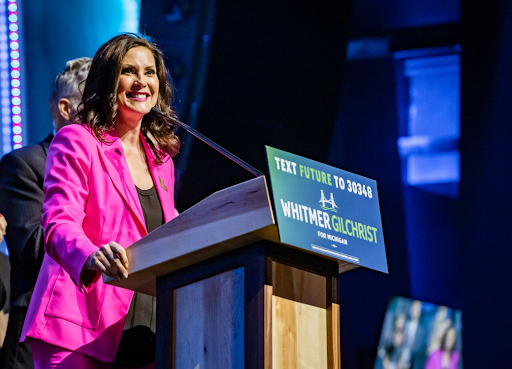 On Tuesday, Nov. 8, voters went to the polls, dropped off mail-in ballots or waited patiently for their already mailed ballots to be counted.

Gubernatorial races were held in 36 states, including New York. 34 states held elections for the U.S. Senate, which New York had as well. All 435 seats in the U.S. House of Representatives were also up for election.

In New York, incumbent Governor Kathy Hochul (D) was elected to her first full term as Governor of New York. Hochul was serving out the rest of former Gov. Andrew Cuomo’s (D) four-year term, which he was elected to in 2018. She rose to the position of governor after Cuomo resigned amid multiple scandals, becoming the first female governor of the Empire State. Hochul faced a stiff challenge from Rep. Lee Zeldin, a Republican representing New York’s first congressional district on eastern Long Island.

Hochul defeated Zeldin by 5.7 points, receiving 52.4 percent of the vote while Zeldin received 46.7 percent. This election was closely watched by pundits in the final weeks due to the close margin in the polls in the traditionally deep blue state.

Democrats have easily won state-wide elections in New York for the past 15 years by double digits, however this year the state saw a right-ward shift, more so than the rest of the nation. For reference, Cuomo won the 2018 Gubernatorial election by 23.4 points, a much wider margin than Hochul’s 5.7 points.

Much of the rightward shift was seen in the New York City suburbs, as Zeldin flipped Nassau, Suffolk and Rockland Counties from blue to red, compared with 2018. Hochul flipped Columbia and Schenectady Counties from red to blue, however these are much less populated than the three counties Zeldin flipped.

In addition to flipping both of Long Island’s counties in the Governor’s race, the newly-drawn third and fourth congressional districts, both located almost entirely in Nassau County, flipped from Democratic control to Republican control. The 17th congressional district, located in Westchester, Putnam and Rockland counties also flipped to Republican control, by a margin of 0.8 points. All of these districts were rated as leaning Democrat before the election, but flipped to the Republican Party, helping give Republicans their narrow House majority.

Zeldin focused his campaign on crime, and the rising crime rates in New York City. He showed that many people living in the suburbs of the city cared about this issue, as he won these previously Democratic-won counties by double digits.

In Florida, Republicans had a victorious night as well. Florida Gov. Ron DeSantis (R) was re-elected by 19.4 points, much higher than his 2018 margin of 0.4 points.

Outside of New York and Florida, Democrats outperformed expectations in many states. In the Senate race in Washington, incumbent Sen. Patty Murray (D) faced a challenge from Republican Tiffany Smiley. The contest was looked at as a close race, however Murray pulled through by 14.6 points. This margin was much higher than many of the polls, which showed Murray winning by single digits.

Democrats shocked many in Arizona, a swing state that less than a decade ago was solid Republican territory. Democratic Secretary of State Katie Hobbs was elected as the governor of Arizona, defeating Republican candidate Kari Lake by a razor-thin margin of 50.3 percent to 49.7 percent. Almost all polls showed Lake winning easily.

Data showed that young voters helped deliver many of these wins. The Hill reported that 70 percent of voters aged 18-29 voted for Fetterman in Pennsylvania. This figure was very similar in Arizona, with Hobbs winning 71 percent of this age group.

Michigan Gov. Gretchen Whitmer (D) was re-elected by 10.6 points, higher than her 2018 margin of 9.5 points. Young voters turned out in large numbers in Michigan to support Ballot Proposition Three, which affirmed a woman’s right to an abortion in the state constitution. Both houses of Michigan’s legislature flipped from Republican to Democrat majority as well.

In Washington, 22-year old voter and LIU communications and theatre alumni Shelley Dean feels that young voters helped deliver wins in her state, as well as across the country.

“Of course I think Gen Z has affected the midterm results. With each new election cycle there’s a new wave of youth who are eligible to vote who have been angrily watching from the sidelines. I don’t think that will change anytime soon,” Dean said.

Young voters have turned out in large numbers for Democratic candidates in the elections. Some feel that the influence that Gen Z has will continue to grow over the years.

Michael Lyons, a 21-year-old New York resident who recently moved to the state, feels that this momentum is seen across the country.

“The youth in my home state of California and the youth of New York are relatively the same in terms of politics,” Lyons said.

As young people from coast to coast get older, people feel that their impact on elections will only grow.

“Gen Z may have had a small impact on the election because the people who make up the generation are mainly still too young to vote. They will continue to have a greater impact on future elections as they age enough to vote,” Lyons added.

“I think Gen Z will continue to move more left, but the Democratic Party as a whole will continue to stay more centralized for a while longer. We have a while to go before the older generation of moderate Democrats retire and the new wave of younger more radical democrats take over. It’ll be interesting to see when and if that shift occurs,” Dean said.

Lyons agrees, but thinks that as the generation ages, their left-wing ideals could fade away.

“I feel as though they will definitely have some impact on political parties, but I don’t think anything can be said for certain. Usually when people get older, they lean towards the right. So it is possible that this could happen to Gen Z,” he said.