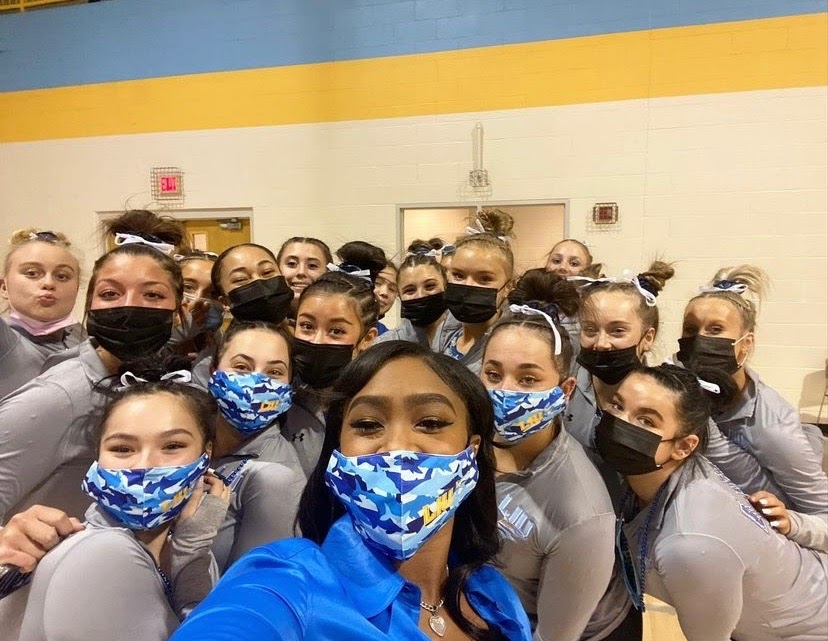 LIU Women’s Gymnastics opened their season at the Pratt Recreation Center against Yale University on Sunday, Jan. 23. This was not only the team’s first home meet of the year, but was also the first Women’s Gymnastics meet to ever have fans in attendance, as COVID-19 restrictions limited fan attendance during the inaugural 2020-2021 season.

Coming into the first home meet of the season, the Women’s Gymnastics team was looking to get their first win in program history, as they had an 0-12 record during the 2020-2021 season.

With fans in the stands for the first time, the Sharks felt the pressure early on, scoring a 48.075 in their first event, Vault. Following this underwhelming start, junior business major Amanda Loo says the team had to come together and get on the same page.

“Vault was our first event and we got a 48, but it was not our best lineup,” she said. “So, we had to circle up and ask ourselves, do we really want this? And we all agreed to fight to the end.”

Following the slow start, the Sharks got back on track thanks to an outstanding performance by sophomore international relations major Mara Titarsolej, who scored a 9.90 on the uneven bars, which was the highest score for that event.

For Titarsolej, she believes that her team’s comeback was one that was rooted in their hard work during the offseason.

“We had a much better preseason than last year. We spent a lot more time together and we know each other better in what we need,” she said. “We learned to trust each other and the process of training and getting better.”

Fueled by the near-perfect performance by Titarsolej, LIU went on to score a school record 48.700 on bars, which got them right back on track.

The Sharks carried this momentum into their next event, Beam, as they scored a 48.600, which tied them with Yale at a running score of 145.375 heading into the final event of the meet.

Loo believes that having fans in the stands was a key factor to pushing the Sharks over the top.

“Being in front of the home crowd really amped us up. It was exciting especially for all of the freshmen because last year we did not have fans in the stands so having that back was exhilarating,” she said. “Being able to perform and looking at all of my friends, family, people from my home gym, and my coach who never saw me do college gymnastics before made it really exciting for me.”

LIU’s head coach Randy Lane also felt the impact of having fans for the first time.

“I would have to say that the student section was pretty awesome,” he said. “When they saw the girls tumbling, I think their reactions to just our team doing gymnastics was really great to see. That makes me happy when we can make students and just people in general have pride in what we’re doing. I think they become a part of our family as well. So that was definitely a highlight for me.”

The Shark’s victory marked the first ever for Coach Lane as the head coach of this program. For him, it is much more than just one win.

“I take great pride in the fact that these women have come together so quickly at LIU. I find that hard work pays off and they have been working extremely hard,” he said. “For me, it’s not so much about the win, it’s literally about the culture that we’re building here and the legacy that this first team is leaving when they graduate… I think that more than anything, just seeing their faces and their goals being met was enough to make me happy as the head coach winning for the first time.”

Titarsolej believes that this was a statement win for the up and coming program.

“It felt really good to win. We all knew we were capable of scoring a 194, and we proved it yesterday,” she said. “It was really great to show off in front of our fans and everyone who came.”

Despite scoring a program record in their last meet, Coach Lane believes that his team is capable of even more as the season progresses.

“We have set a goal for us, scoring as a team, a 196. That is like a really big benchmark, especially for a new program to even reach that. I got many text messages and phone calls yesterday after our meet about people saying, ‘oh my gosh, you made it to the 194 mark.’ I’m like, yes, and we’re not done,” he said. “Hopefully we will continue to progress like we have been over the last three meets, as we scored a 190.8 in our first meet and to score a 194 in really just two weeks time, it ‘s exponential growth. So I’m hoping that they will keep growing, not only in the score, but also as a team and to continue to work on the small details.”

Sharing her coach’s ambition, Loo thinks that her team has the potential to continue to grow.

The Women’s Gymnastics team will look to continue their winning ways when they travel to Towson University on Friday, Feb. 4.