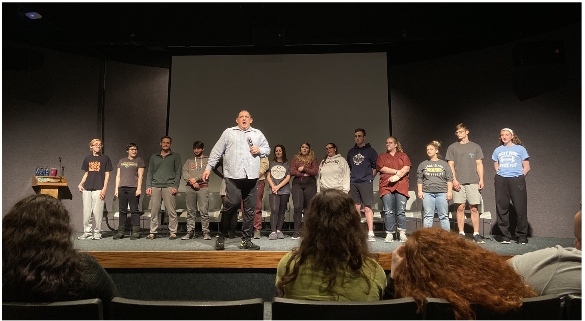 The Student Activities Board (SAB) hosted comedian hypnotist Keith Karkut in the Gold Coast Cinema on Tuesday, Oct. 22. From 8 p.m. to 10 p.m., the 43 audience members were entertained as Karkut hypnotized a group of students live.

Karkut is a well-practiced hypnotist with over 25 years of experience under his belt. He stressed to his audience members that hypnotism does not work with everyone. “If you’re going to come up here tonight and you have the slightest bit of hesitation [or] if you’re going to try and fake it, please do not bother… because it’s not going to work,” he said. According to Karkut, hypnosis only works on individuals who are “happy, healthy and really want to make it work.”

A total of 14 students volunteered to be hypnotized. While in a hypnotized state, Karkut was able to convince these individuals to perform funny acts for the audience.

In one instance, Karkut convinced a particular student that he was Tarzan and in desperate need of finding his partner, Jane. With the snap of Karkut’s fingers, this student jumped off the stage, paced around the cinema, pounded his chest multiple times, and screamed for Jane over and over as audience members erupted in laughter.

Later in the show, Karkut convinced all 14 students that they were in a dance competition and the winner was going to receive a cash prize. The hypnotized students performed the many different styles of dance Karkut told them to enact, including salsa, the robot and more.

In the freestyle edition of the competition, freshman musical theatre major, Gabriella Beckman gained the attention of the audience when she did the splits. At the end of the show, she was shocked when she realized what she had done. “I didn’t realize I did a split, and ballet,” she said with a laugh.

At the end of the show, Karkut said with confidence, “I truly believe each and every one of you were hypnotized in some way or form.”