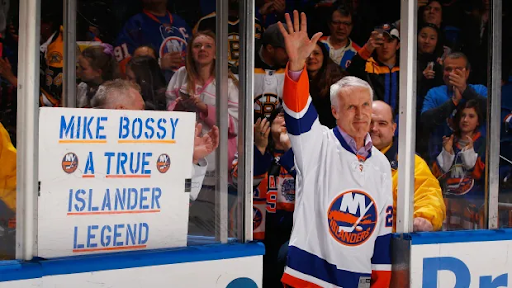 Islanders’ fans say goodbye to an all time great

New York Islanders’ legend Mike Bossy passed away on Thursday, April. 14, at the age of 65 due to a tough battle with lung cancer. While his career lasted just 10 years because of injuries, no player in NHL history has a better goals-per-game average than Bossy (0.76) and is one of only six players to score 50 goals in 50 games.

He was named to the NHL Hall of Fame in 1991, had his number 22 retired by the Islanders in 1992, and was named one of the 100 greatest NHL players in 2017. The hockey community will forever remember him for his skill, but also his charming personality.

Sophomore broadcasting major Brady Campbell recalls how for younger fans, it is hard to realize how good of a player Bossy truly was.

“As a younger fan, you hear so many stories from the people that experienced his time playing in the NHL, and they talk about just how good he was, and you almost don’t want to believe it. You wonder how someone can dominate the game like Bossy or Gretzky did until you actually see the highlights. You hear all the stories about his 50 goals in 50 games, winning the Conn Smythe Trophy (playoff MVP) one year and how important of a piece he was to the four straight Stanley Cups that the Islanders won,” Campbell said. “Hearing that, you’re so surprised that someone can be this important to a franchise and a team, and you see how loved he is by the NHL as a whole, especially the Islanders’ fan base. He was a great person on and off the ice, a very likable guy and obviously an amazing player that the whole islanders’ franchise is so proud to have played for them.”

Chet Tempesta, an Islanders fan since the very first game in 1972, spoke on what it was like watching Mike Bossy live.

“He was completely different than most other players in his approach to the game,” Tempesta said. “He was a pure shooter, and you knew when he got the puck, and he’d take a shot that it almost always seemed to go in the net, not to the surprise of anybody. He was an unusual player, he knew how to shoot the puck and that skill was well-honed when he was a young man.”

Campbell explains how a player like Mike influenced the new generation of athletes.

“Players and prospects coming out of college, if they’re a really good goal scorer like Austin Matthews and Connor McDavid, they are immediately compared to Mike Bossy. Obviously, the game today is different than it was back then, but to put up the numbers he did is ridiculous,” Campbell said. “He inspired a lot of players today and a lot of people around the league to be the best they can be, and he was a part of one of the greatest teams in NHL history and became one of the most influential players ever. He was a great player who made the players and people around him look better.”

Tempesta mentioned how the skill of Bossy helped those around him and how players today, while talented, score goals in different ways than Bossy did.

“In his own way, he was a leader, and I think he really had to be a motivator for the young guys to score. He was probably one of the best to ever play the game skill-wise. With his scoring ability, he had the effect of a leader, and that made the other players around him better. At some point in time, you might see someone become like Bossy. There are a couple of guys in the league that have the potential to be excellent goal scorers,” Tempesta said. “You’ve got Matthews in Toronto who seems to stand out. There’s a couple kids on the Islanders who have potential, they aren’t pure goal scorers, but they’re hustlers. They play the dirty areas and come away with a goal, but it will be a long time before you see a guy like Bossy.”

Cambell debates whether anyone can match Bossy’s scoring ability.

“Considering that the game has changed a bit since he played, I want to say no. I obviously never got to watch him play, but you watch the highlights, and he was always around the net. He was a great finisher, and he could shoot the puck. Today you see players who are incredible around the net as well, but their styles of play are a little different. Maybe by the end of Austin Matthews’ career, we’re talking about him being one of the greatest goal scorers ever, but I think if you look at the statistics of goals-per-game, and even though Matthews is still young, what Bossy did in that department was absolutely ridiculous,” Campbell said. “Scoring 50+ goals in just about every season is unbelievable. Obviously, he had great teammates too, but I don’t think anyone will really put up the numbers he did. Bossy only played for 10 seasons, and if he didn’t have his career cut short, who knows what the numbers would be.”

Despite the Islanders missing the playoffs this year, Campbell thinks they will be back stronger next year.

“This was a tough year, starting with the road trip, which they did okay on, but to start with 13 games on the road is very hard. Then they got home and got destroyed by Covid. It’s hard to play with half your team being minor league players. You can always make excuses, but even when they were healthy, their play wasn’t particularly good, although there were plenty of bright spots. It is also very tough losing three legends in Clark Gillies, Jean Potvin and Mike Bossy, who were all a part of that dynasty team. This is probably one of the worst years for a franchise in professional sports history,” Campbell said. “I think they can bounce back. The Eastern Conference, especially the Metro (Metropolitan Division), is a tough division, but they are built for the playoffs. It’s just making it there. The last few seasons we’ve seen towards the end of the year, they have stumbled their way in, but once they get in, they are one of the teams to beat, being one goal away from the finals last year, which was heartbreaking. They need to get someone who has a bit more of a goal-scoring prowess, and then they’ll be a dangerous team again for years to come.”

Similar to Campbell, Tempesta thinks the Islanders can come back from this tough year.

“I absolutely think they can bounce back. I think the scheduling, covid, the cancellations and the fact that they started with 13 games on the road has an awful lot to do with this disastrous season,” Tempesta said. “Next year will be completely different. The possibilities for a (playoff) run are there, and the chances are excellent.”

The Islanders honored Mike Bossy before Tuesday night’s game against the Florida Panthers. His legacy as a player and a person will forever live on in the hearts of hockey fans all across the world.