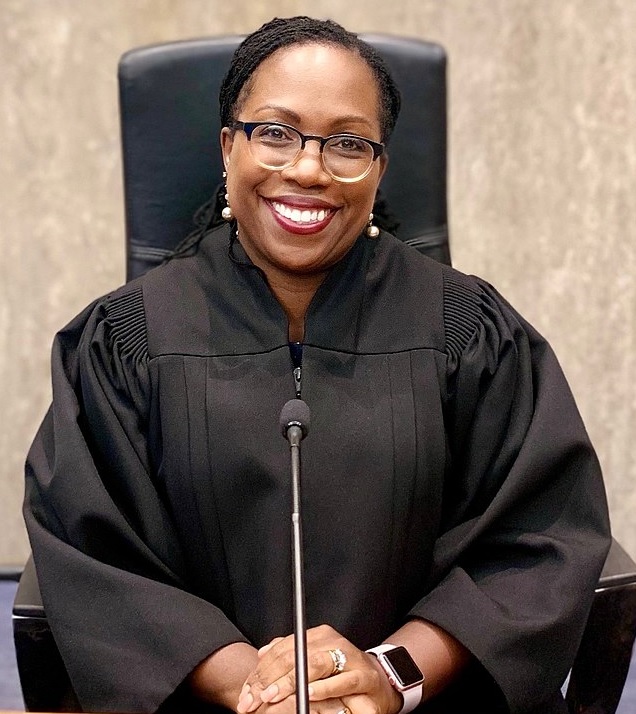 The newest Supreme Court Justice, Ketanji Brown Jackson was confirmed on Thursday, April 7, after 23 hours of being questioned by the Senate Judiciary Committee at her confirmation hearings, making her the first Black woman to sit on the top US court. Brown replaced the retiring Justice Stephen Breyer who is 83 years old.

Jackson was born in 1970 in Washington D.C but was raised in Miami, FL, where she graduated from Miami Palmetto Senior High School, continuing her education at Harvard University. Then after working as a staff reporter for Time Magazine in 1992-1993, she served as an editor for the Harvard Law Review while working to earn her law degree in 1996 from Harvard Law School.

Jackson began her legal career with three clerkships, federal judges Patti B. Saris and then Bruce M. Seyla, as well as U.S Supreme Court Associate Justice Stephen Breyer. After spending a couple years working as a lawyer in private practices after her clerkships, in 2003, Jackson joined the U.S. Sentencing Commission. In 2015, she started serving as a federal public defender in D.C, and representing detainees held by the U.S. in Guantanamo Bay, Cuba. Then, in 2009, President Obama nominated Jackson as vice chair of the U.S. Sentencing Commission and was confirmed in 2010.

Along with Jackson being confirmed, President Biden fulfilled a promise he had made on multiple occasions during his campaign, that nominating a Black woman to the Supreme Court was something he was looking forward to.

“And everyone is entitled to be treated with dignity, no matter what, no matter who they are…I’m looking forward to making sure there’s a Black woman on the Supreme Court, to make sure we in fact get every representation,” Biden said during a Democratic presidential debate on Feb. 25, 2020.

The next day, he mentioned it again at a press conference.

“As president, I’d be honored to appoint the first African American woman to the court because it should look like the country. It’s long past time,” he said.

“She represents a first and there’s great value in having her experiences and it’s valuable for people to see someone in power like that, it makes them think “I can do that too”,” Buchman said.

Not only will Jackson be the first Black woman on the bench, but she will also be the first public-defender to serve as a Supreme Court justice, as well. Her experiences with being a public defender has caused a lot of disagreements with the parties on the committee. Republican Senator from Arkansas, Tom Cotton, received criticism for his remark implying that Jackson will sympathize with the views of some of her past clients, including the detainees at the Guantanamo Bay military prison in Cuba.

“You know, the last Judge Jackson, [Justice Robert Jackson] left the Supreme Court to go to Nuremberg and prosecute the case against the Naziis, this Judge Jackson might have gone there to defend them,” Cotton said on the Senate floor Tuesday, April 5.

Buchman thinks that Jackson will actually make a difference but with time, and one of the reasons being because of her history with being a public defender.

“I do think she will make a substantial difference, not so much immediately in the ideological breakdown of the court, it’s a pretty solid 6-3 conservative majority now, and her replacing Stephen Breyer isn’t going to change that,” Buchman said. “But to me, her impact comes in two ways: one is demographic, and the other part has to do with her background as a public defender. This is a professional experience that is not found on the Supreme Court and it gives you a very different perspective as to how the criminal justice system works.”

With Jackson now becoming the 116th Supreme Court justice, showing the most bipartisan of the couple recent Supreme Court nominee votes that have been seen. Amy Coney Barrett had 52-48 votes, two democrats in favor of her, and Michael Cavanaugh with only one democrat voting in favor of him. Jackson’s final vote tally was 53-47, with three Republicans joining all of the Democrats in favor for her to a lifetime appointment as a justice on the Supreme Court. With one of the Republicans being Sen. Mitt Romney from Utah.

“I have concluded she is a well-qualified jurist and a person of honor. While I do not expect to agree with every decision she may make on the Court, I believe she more than meets the standard of excellence and integrity,” Romney said in a statement clarifying his support on Monday, April 4.

Prior to Jackson being confirmed as a justice, only five women and two Black men have served on the Supreme Court. With Jackson being the first Black woman to serve, history is in the making. President Biden mentions how honored he is to be a part of this significant moment of history in a Tweet on Thursday, April 7 after Jackson’s confirmation was announced.

“Judge Jackson’s confirmation was a historic moment for our nation. We’ve taken another step toward making our highest court reflect the diversity of America. She will be an incredible Justice, and I was honored to share this moment with her,” Biden said in the Tweet.