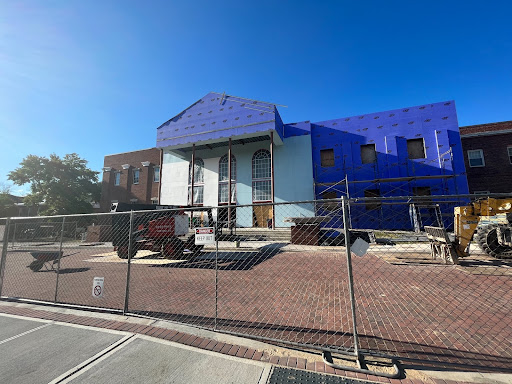 LIU Construction, a help or a hindrance?

Students at Post began the school year with updated walkways and multiple areas undergoing renovations. Students welcome these additions, but with the lengthy construction times, the beauty of campus is seemingly tainted by piles of bricks and caution tape.

Despite the hindrances there’s still areas to be appreciated. Senior art education major Loredana Citizen has noticed various improvements with the pavers around campus.

“The first renovation I noticed was with the brick paths outside of Hillwood Commons. There used to be a hole in the concrete by the side doors of Hillwood. I would have to take a big step to avoid it, but now the hole is gone,” Citizen says.

Although this is a welcome change, there are other areas Citizen would prefer to see improved. Her main concern being the lack of sidewalks across Gold Coast Road.

As an art student, Citizen has multiple classes in the sculpture building located on the other side of campus. Like many other dormers, Citizen does not have a car and she can not always rely on the Shark Shuttle to bring her to class on time.

Her only option is taking the strenuous walk along the streets of Gold Coast Road.

“If I have to walk to the sculpture building I have to walk half on the street, half on this little patch of grass,”Citizen says. I wish the school put its funding towards a sidewalk instead of bricks around campus.”

Although the updated brickwork enhances campus beauty, there are still many areas being renovated. Some students feel this is inconvenient. This is evident by the Pell Hall Life Science building, which has been under construction for multiple semesters.

“It’s ugly. I don’t know how long it takes to make a building but it seems like it’s taking a long time,” Citizen says.

Citizen recounts the Pell Hall construction interfering with her film photography class during her fall semester of 2021.

This change came after many students already bought film cameras and other materials for the course.

The film professor was not made aware of the dark room demolition.

“[Campus construction] also messed with the ceramic buildings’ water for a while. We couldn’t get water- which is something you need for ceramics,” Citizen states.

The water issue has since been resolved but the area surrounding the ceramics building remains fenced off as construction continues.

The construction of the Pell Hall building has taken a while to make noticeable progress. However this semester the construction workers seem to be ramping up production.

Freshman nursing major Antonina Carollo believes the construction is getting done really fast, and these changes are enhancing campus beauty.

“It looks really good. I feel like once [Pell Hall] is done it’s going to be completely gorgeous,” Carollo says.

Carollo has a three hour lab class in Pell Hall. Although she doesn’t mind the appearance of the building, the noise is hard to ignore.

“It could be a little bit distracting with the noise. In class especially you can hear the outside construction going on. It is what it is,” Carollo says.

Despite this issue, Carollo is pleased with the efforts being made to improve campus. This may be the year Pell Hall is finally completed.