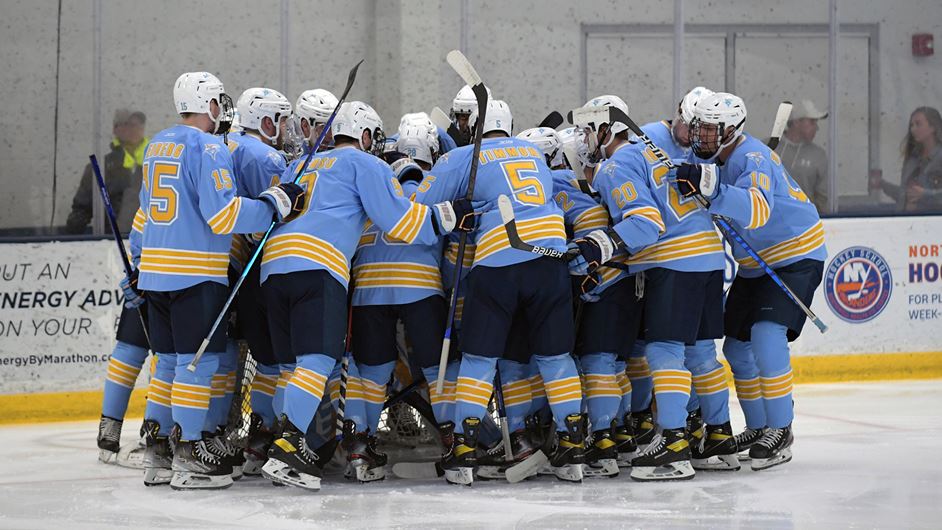 Men’s hockey is one of the newest teams at LIU, as the program had its inaugural year during the shortened 2020-2021 season. In this opening season, the Sharks had a record of 3-10, and didn’t have a single home game. However, LIU has found its home this season at the Northwell Health Ice Center in East Meadow.

After starting the 2021-2022 season on the road, the Sharks looked to snap their three-game losing streak in the first home game in the program’s history against Assumption College on Friday, Oct. 22. With fans, parents and other LIU student-athletes lining up to see their team play at home for the first time, junior hockey team player Brandon Perrone felt he was a part of history.

“Being from Long Island, it was something I’ll never forget. To be able to be a part of history was awesome,” he said. “Playing in front of all my family and friends was such an amazing experience.”

Freshman forward Isiah Fox, who also recorded an assist, felt that being at home helped give his team the needed boost to get their first win of the season.

“Playing at home at Northwell was a super cool experience for all of us on the team,” he said. “The energy was unmatched, and it felt good having people cheering for us. I think the confidence boost was tremendous.”

Following the outstanding home opener, the Sharks looked to carry their momentum into their second home game against Post University the next day. In another one-sided contest, LIU was able to win their second consecutive game for the first time in program history by a score of 6-1.

Graduate defender Carson Musser and senior forward Jordan Timmons had two goals each in the Sharks’ second home win of the season.

Goaltender Brandon Perrone, who earned his first win as a Shark in his 10 save performance against Post University, reflected on how important these home games were.

“Having home games is always an advantage, especially when it’s the first time in program history,” he said. “I think everyone was very excited to play at home, and the energy from the crowd really helped.”

Fox agreed with Perrone, stating how much the fans helped fuel their two-game winning streak.

“The fans helped a lot throughout both games. The community has been waiting for some college hockey for years, and it was awesome being the first group to provide that for them,” he said.

Following two impressive wins, both Fox and Perrone are looking forward to building a culture and taking on big schools.

“I am looking forward to playing more home games and also beating some of the top nationally-ranked schools in college hockey,” Perrone said. “I think we have a great group of guys who can do it. I’m excited to see what the future holds.”

Fox went on to add that there is so much more to accomplish along the way.

“Throughout the season, we are just looking to continue to build the 24/7 culture we have here,” he said. “We have a good group of guys that can knock down some big schools.”

The LIU men’s hockey team will look to continue their success at home when they take on Princeton University on Friday, Nov.12.