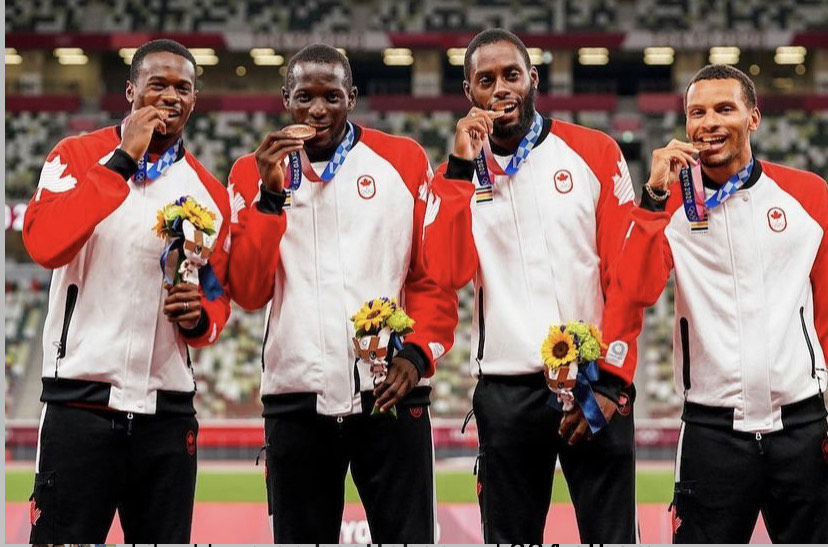 Brendon Rodney, a 2016 Long Island University Alumni has secured his second Olympic bronze medal in the Men’s 4 x 100 meter relay. Rodney won his first back at the 2016 games in Rio, and on Aug.16, he took home his second in Japan.

The Canadian team of Rodney, Aaron Brown, Jerome Blake, Andre De Grasse had a time of 37.70, finishing in third place behind Italy and Great Britain.

Rodney feels there is no bigger moment than being in the Olympic Games.

“Competing for your country is always a great honor but competing at the Olympics with the world watching is probably the biggest honour for any athlete in my sport of track and field,” he said.

Despite the 2020 Olympics being postponed and all the other challenges of the last two years, Rodney re-assured his commitment to staying the course.

“My preparation remained much the same. I was thrown off a few times, but it’s part of the daily norm and we just have to roll with the punches,” Rodney said.

Rodney will always remember LIU for what was instilled in him as a young collegiate athlete.

“I thank LIU everyday for my development as an athlete because it was where I first started to believe I could be one of the world’s best and where I became one of them,” Rodney said.

Men’s Track & Field head coach, Simon Hodnett, has been with the program in Brooklyn since 1999. Hodnett has so many great memories of watching Rodney since the moment he signed his scholarship to join the Blackbirds.

“I have too many favorite memories of Brendon and his time here at LIU, my favorite memories include signing his scholarship and letting me know that he would be attending college at Long Island University, attending the 2015 World Championships in Beijing, and watching him set a personal best in the 200 meters,” Hodnett continues.“As well as watching him and his teammates compete and earn a bronze medal in the 400 meter relay, watching him win a national title at the 2016 Canadian track and field championships as he made his first Olympic Games team, all while establishing a new personal best of 19.96 in the 200 meters.”

Hodnett has seen a lot of Rodney’s development both on and off the field from being a student athlete, to now being an Olympic medalist.

“Brendon has developed into a world class athlete by staying focused on his goals. He would always be in my office talking [and] asking me questions about training or about life,” Hodnett said. “He listened to me, and I listened to him. Brendon got stronger in the weight room. His endurance improved. And he became more efficient from a technical aspect whenever he began sprinting. Those three things improved, which led to improvements in all of his running events,”

Hodnett felt as a student athlete Rodney was focussed on not only athletics but academics as well.

“His parents instilled in him the importance of an education and he did everything that he needed to become successful on and off the track. My goal as a coach was to design a training plan that would assist him in reaching his goals. Him reaching his goal had more to do with him knowing what he wanted,” Hodnett said.

Hodnett feels there are many parts to Rodney’s game that allow him to be great when the moments call.

“His focus, work ethic, drive, determination, and the encouragement from his mother, father and family members helped him to excel during his biggest moments,” he said.

Hodnett claims Rodney’s presence and leadership always positively affected the people around him.

“Brendon has always been a team player and like a brother to many of his teammates. He worked hard and motivated his athletes to train hard as well, so that the entire team could be successful as a unit,” he said. “He did not enjoy traveling to competitions without his teammates, and always had fun at competitions when he had his teammates there, so that he could share his success with them.”

Hodnett is confident that Rodney will always hold a tremendous legacy on the LIU Track & Field Program.

“Brendon is the only person that I know of in the history of our track and field athletes that earned three medals in international level competitions. His one bronze medal for the world championships and his two bronze medals from the Olympic Games makes him the greatest track and field athlete in the history of our sport,” he said. “He is legendary, and I am thankful that he chose our university to compete for.”

Rodney has continued to experience immense success as he looks back on what he represents to everyone cheering him on back home, and at LIU.

“LIU is my home away from home, and the support I have received from them has been unmatched, so the feeling is great being able to compete in front of Canada and my LIU Family,” Rodney said.

Rodney is still far from finished in his professional career, as he looks to compete again and grow his legacy even further.

“My goals are to compete at one more Olympic Games and come away with two or three more medals,” he said.