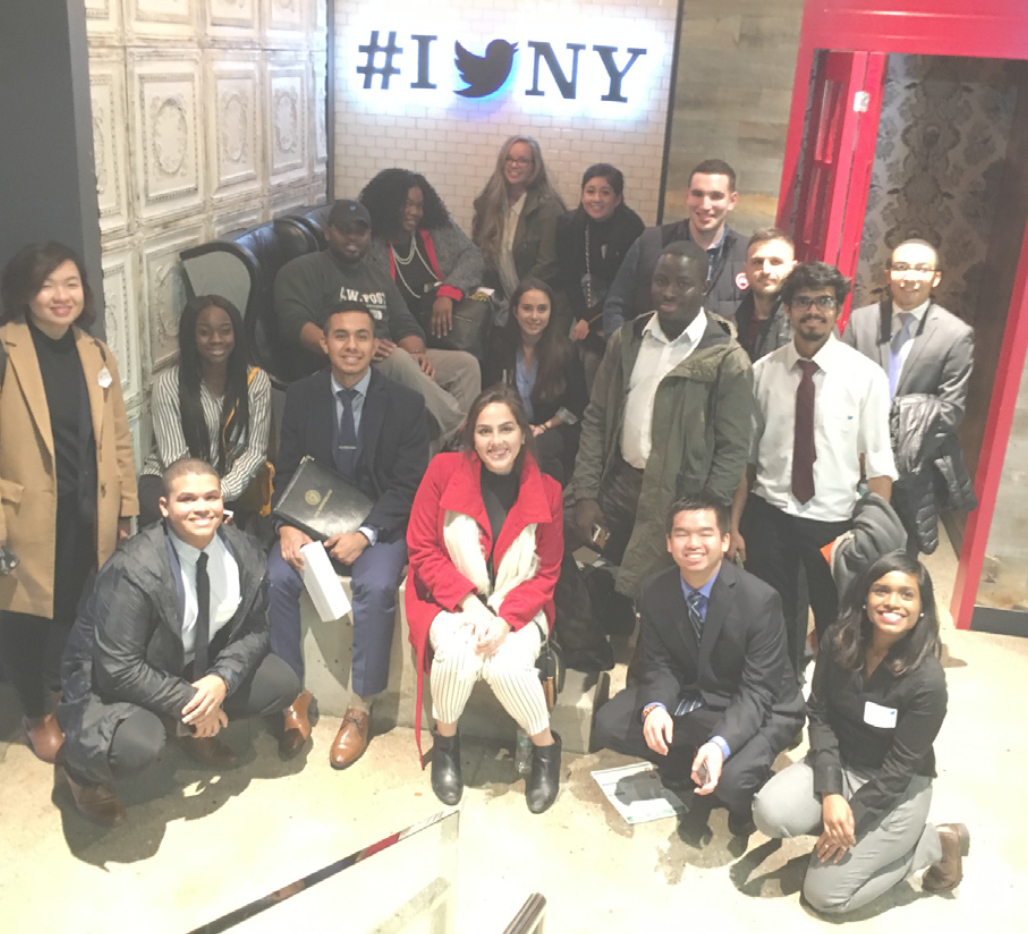 On Friday, Nov. 10, students from both LIU Post and Brooklyn campuses joined the office of Employer and Alumni Engagement for a Day In the City. The event, hosted by the office of Employer and Alumni Engagement, is the third Day In the City event since the office began the trips in the Spring 2017 semester. In the past, students were able to tour and make connections of some of the large businesses and corporations in New York City, including WNET/WLIW, Barclays Center, and Pathways Omnicom Media Corp in Spring 2017, and Microsoft on October 20. On Friday, 17 students flocked to the Twitter headquarters in downtown New York.

Students were met by host, Lejorn Leys, Twitter college recruiter and Post alumnus. Most of the architecture was expected for a New York office building, brick walls and wood floors. However, there were more abstract designs in the wallpaper that featured ambiguous elements of the city. Twitter has an easy-going environment, with no dress code, an open bar and gaming consoles in the office, and they offered in-office benefits such as showers and maternity rooms.

Leys joined three other speakers, Shelby Clayton, a client account manager, Zachary Heinemann, a research specialist, and Steward Conelius, a client partner that keeps track of the specifics of the company’s success, on a panel discussion with the students. During the discussion, there was a Q&A, and students asked questions ranging from stock prices to most importantly, the application process. The number one aspect of the application that stood out to a lot of students was that the university or college an applicant attended does not appear on the form. At Twitter, the standard is that there is more to the applicant than the name of their school. “At the end of the day, it’s just a piece of paper,” Leys said. The panel ended by encouraging students to apply for internships.

The next Day In the City has not yet been planned, yet both Moreen Mitchell, the university director of employer and alumni engagement, and Joan Yonke, the Post campus director, emphasized that there are more to come.

The office of employer and alumni engagement offers programs and events to students to better help them make connections in their fields during their education, which can benefit them later after graduation. The Future Alumni Committee, a new philanthropy initiative created by the office, will host a “Tradition Tuesday” pizza party to get current students interested in philanthropy in their office located in the old bookstore, on Tuesday, Nov. 21 during common hour. Green and gold attire required. RSVP via handshake.liu.edu.

For more information, visit the employer and alumni engagement office, their table on Tuesdays in the Hillwood Commons lobby, or Handshake.liu.edu.