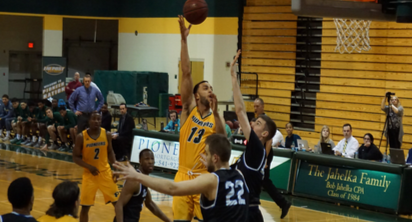 The men’s basketball team landed a slim victory against the Roberts Wesleyan Redhawks in the East Coast Championship (ECC) final tournament game on Sunday, Feb. 25, securing the number four seed. The home game was a close call, with the Pioneers leading by just six points, 86-80, at the end.

It wasn’t an easy start for the Pioneers, with the Redhawks leading 5-0 at the start of the first. Kyle Doucette, sophomore forward, placed the Pioneers on the board with two points at 16:41 in the first half.

The Redhawks put up an aggressive offense as they dominated the court in the first half. The Pioneers had trouble keeping the ball in their hands, yet managed a lead of 18-11 by their first time-out. They took a 44- 30 lead at the end of the first half.

The Pioneers had their largest lead at 52-32 in the second half, but the Redhawks used an 18-6 run to make it a five-point game, 66-61, with 7:57 remaining. The Redhawks managed to cut the deficit down to four points, but the Pioneers held on for the six-point victory and home playoff game. This win follows a loss of 61-58 on Friday, Feb. 23, when the Pioneers celebrated Senior Day at home against Daemen College. The three seniors on the team were honored, economics major Kyle Taylor-McLeggan, criminal justice major Hunter Powell and business administration major Aary Bibens.

The first half was even with a score of 29-29, 13 points coming from Rivers as he played a total of 19 of 20 minutes in the half. Just over halfway through the final half, the Pioneers were down with a score of 44-39 and Daemen College started to take off, by adding on 10 points and limiting the Pioneers to four points with just under four and a half minutes left in the game.

The Pioneers started to show some life later on. After being fouled on a three-point shot, Rivers went to the free throw line, scoring for all three shots, and cut the lead down to 60-55 in favor of Daemen College. With 19 seconds left in the game, Rivers drops a three pointer, making the score 60-58. Unfortunately, after a missed three pointer by the Pioneers, Daemen went on to win, 61-58.

The Pioneers will host Molloy College in the play-in round on Wednesday, Feb. 28 at the Pratt Recreation Center.