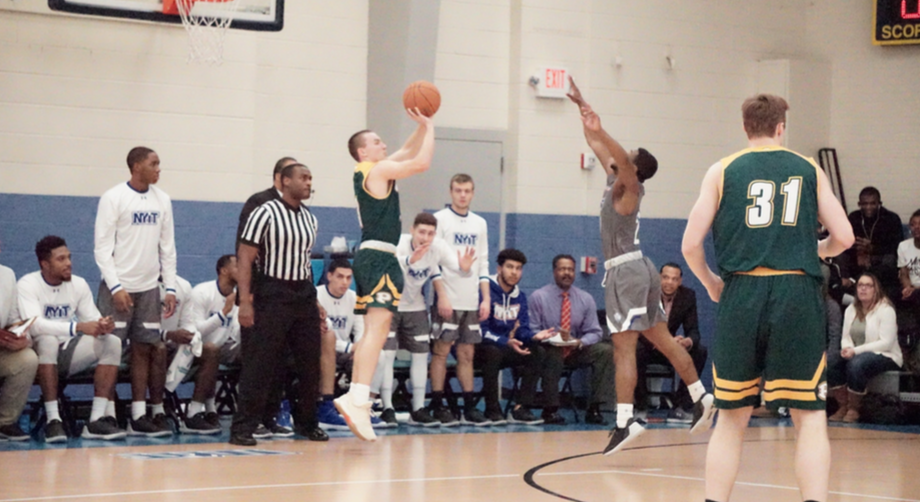 Men’s Basketball Takes The Win After a Strong Second Half

On Saturday, Jan. 27, The Pioneers went up against the NYIT Bears in an East Coast Conference dual at NYIT. The Pioneers did not have a strong first half; they only shot 34 percent from the field with a large score difference of nine points.

The first 20 minutes of the game were slow; it took just under six minutes for The Pioneers to start to close in on an eleven-point deficit in favor of NYIT. However, after freshman guard, business administration major, Austin Kennedy sank three of five straight three-pointers, The Pioneers began to even the score at 32-32 after the first half.

At 12:45 in the second half, an entirely new team awoke from the first half; The Pioneers converted 10 straight buckets in a row, taking a 76-71 lead. The Pioneers went from a field goal percentage of 34 percent in the first half to an impressive 54.8 percent and a free throw percentage of 95.5 percent on 22 attempts. Jared Rivers, a sophomore guard, physical education major, totaled 14 points with six assists. The Pioneers’ bench was putting in their share of points by generating 38 of the 92 points, which ultimately led them to a landslide victory over NYIT. “We finally just wore them down and we focused in and made shots. The pressure we put on made them panic and we stayed poised,” said Aary Bibens, a senior guard business management major said.

The Pioneers will hit the road for their next game against the University of Bridgeport on Jan. 31 at 7 p.m.