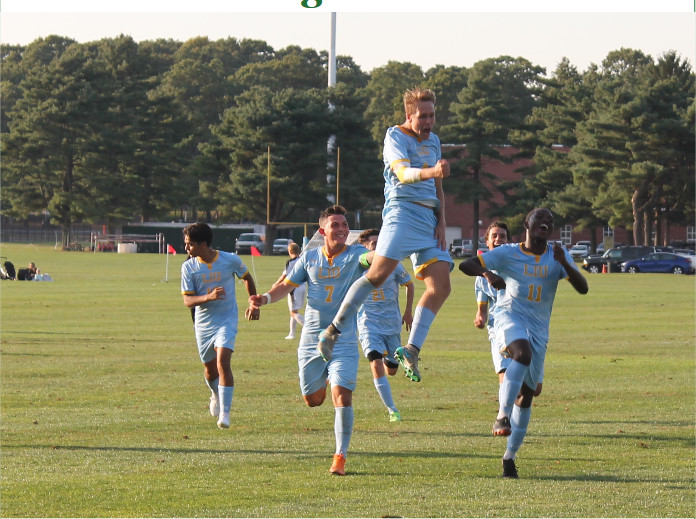 The men’s soccer team played its first North-east Conference game at LIU Soccer Park on Sept. 27 against Saint Francis University. After being down two goals in halftime, the Sharks bounced back, took the game to overtime and won with a score of 3-2. “We showed courage, heart belief today,” senior captain Kyle Parish said after the game.

The two teams were evenly matched during the first half of the game, but the Sharks got the first dangerous scoring opportunity in front of the goal. After 15 minutes, sophomore Athanasios Coutroumpas received a pass from freshman Papa Ndoye inside the penalty box, but the shot went over the goal. However, three minutes later, the Red Flash moved forward along the Shark’s left side and scored their first goal of the game.

After the goal, The Sharks kept attacking but without any luck. With only a minute left of the first half, the Red Flash scored their second goal on a penalty kick and took a 2-0 lead into the second half. “We made a couple of bad mistakes to go down early, but I thought the possession, the passing and the movement was really good, and as the game got going we got better,” Coach Michael said

The Sharks came onto the field in the second half with new energy. Only four minutes into the half, Ndoye scored his fourth goal for the season assisted by junior Johnson.

The Sharks kept pressing the Red Flash after the goal and had the upper hand throughout the whole half. In minute 82, the Sharks’ hard work paid off, and Coutroumpas tied the game when he scored his second goal for the season. When the clock struck 90 minutes, the scoreboard showed a 2-2 result and the game went to overtime.

As the teams kicked off the third period, the men’s lacrosse team came running to the field to support their fellow Sharks. “Having the lacrosse team coming out giving us that extra energy in overtime, it was really special,” said.

With audience cheering them on, the Sharks came flying towards the Red Flash’s . Only three minutes into overtime The Sharks got a free kick right outside the penalty box. Sophomore Anton Ocampo took the and tapped the ball to Parish who sent the ball past the Red Flash’s goalkeeper up to the top right corner. The Sharks won the game with of 3-2. “We went into the sheds at halftime and checked ourselves and came back out and smashed it,” Parish said. “I’m proud of all the boys and [their] never-die attitude.”

Regarding his goal, Parish was humble. “I wouldn’t credit that to myself, that’s a team effort,” he said. “I would never have got that if it wasn’t for the fellows .”

With eight games played, Coach was proud of his team’s growth. “The guys have just been fantastic. They keep getting better every day and just keep believing,” he said. “There is something special about this group.”

Looking forward, Coach said they will focus on preparing for the next game and Parish thinks the win on Friday will give the team an extra kick. “It’s a huge momentum boost lead-ing into the rest of the league,” Parish said.