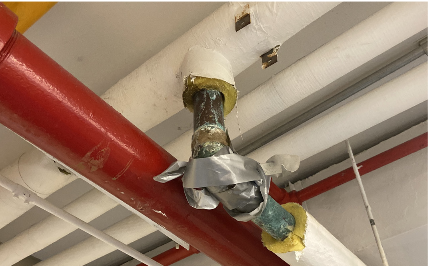 Editor’s Note: Josephine Rerecich is the copyeditor for the Pioneer.

Students have mixed feelings about the university’s efforts in addressing their concerns of the mold growing in their residence buildings, specifically those living in Kings Hall and the South Residence Complex (SRC).

Mold has been an issue in Kings Hall since the beginning of the fall semester. As previously reported by The Pioneer, two students, including freshman biology major Rabecca Baez, moved out of their residence building and into Nassau Hall because of their concerns about the mold. Her previous resident director Maegen Wallaker submitted a work order to facilities services to address the situation.

After the meeting between Baez and Wallaker, apparent changes were made in the laundry room which is one of the locations many students expressed concerns about. “The mold had been fixed by them removing [it] and then repainting the laundry room,” said Isabella Saljanin, a freshman nursing major who lives in Kings Hall.

Freshman forensic science major, Trisha Norwood, another Kings Hall resident, was aware of the changes in the laundry room as well; however, she’s wary of the possibility that the mold will return. “My RA told us that the mold issue has been fixed but even if it has, it’ll come back. The laundry room is so moist and some of the pipes are fixed with duct tape. There’s constant leaking. It didn’t surprise me mold was an issue after having to go in there weekly,” she said.

Other students living in Kings, like BrayLynn Willis, a freshman musical theatre major, weren’t aware of mold in the laundry room. “I haven’t noticed any mold but I also haven’t heard much about whether people’s concerns have been addressed,” she said.

Despite Wallaker’s order request, it took facilities weeks to address and fix the mold growing in the laundry room of Kings. The situation in the South Resident Complex (SRC) was handled in a much different manner.

Josephine Rerecich, a second year graduate student majoring in library and information science, resides in the 21-and-over section of SRC. On Oct. 24, one of the empty rooms in her suite was inspected for mold by one of the RAs on duty. “[The RA] said she saw no mold in there, and as an afterthought, I pointed out the damage on the living room ceiling,” Rerecich said.

For surfaces such as ceiling tiles which are typically in temperatures ranging between 40 and 100 degrees, and with moisture supplied by the conditioned air in the building or by leaks from roofs or mechanical systems, conditions are ripe for the growth of mold.

Initially, Rerecich thought the two tiles on her living room ceiling were simply water damaged. After she brought the issue to the RAs attention, she was informed that the tiles actually had a “bit of mold” on them. A day later, on Oct. 25, “two men came in to replace the ceiling tiles with the damage on it,” Rerecich said.

Despite the similarities, the mold in the laundry room of Kings didn’t get resolved for weeks, whereas the mold in Rerecich’s situation got resolved within a day. It is unclear why the time it took to fix these situations differs and what the criteria is to prioritize one issue over the other.

The Pioneer attempted to reach Wallaker at the office of Campus Life for comment. A representative said that she no longer works for the university and declined the paper’s request to speak with someone else regarding the matter. Roy Fergus, director of facilities, was unable to be reached for comment.