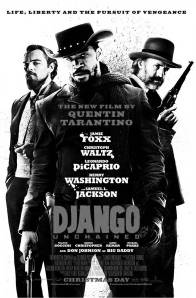 Django Unchained, the brainchild of ac­claimed Hollywood director Quentin Taranti­no (Kill Bill), opened in theaters on December 25. When I say the word open, I mean that Django Unchained busted through the walls of theaters across America. The film implores the talents of some well-known actors includ­ing Jamie Foxx (Ray), Leonardo DiCaprio (Titanic), Kerry Washington (The Last King of Scotland), and Samuel L. Jackson (Pulp Fic­tion) just to name a few.

Besides boasting an all-star cast, the film tells the story of a former slave turned bounty hunter named Django, played by Foxx, who goes on a quest to rescue his wife from Missis­sippi’s largest plantation, Candyland. Django and his wife, Broomhilda, played by Washing­ton, originally lived on the same plantation. The two were sold separately by their former owner as punishment for trying to runaway. And I am stopping there.

If I gave you a summary of the whole movie, it would turn into a lengthy essay. Why you ask? Because the movie is 2 hours and 45 minutes long. Why would you want to sit through such a long film? Because it’s awesome! It’s a lot longer than most movies that last for 90 minutes, but it’s worth it. I’ve noticed a trend in recently released films. In an attempt to shorten the runtime, producers and directors have compromised the quality of the stories. Audiences across the country are leaving theaters dissatisfied. I guess that Hollywood doesn’t think that we’ll invest our time in movies that are actually worth watch­ing but Tarantino avoids falling into that trap.

Although the film is built around the story of Django, it manages to capture the spirit of one of the most important times in our nation’s history. Tarantino is known for his exaggerated style of storytelling so when I first saw the preview for the Django, I was concerned that Tarantino’s style would make a mockery of slavery. Being an African-Amer­ican, I wasn’t too keen on the idea of Holly­wood using ancestors’ hardships as the butt of its jokes. Boy did he prove me wrong. Tar­antino’s over-exaggeration actually helps to highlight the graphic nature of slavery. There were times in the film when I could not even bare to look at the screen. Then I thought to myself, “The images that I’m seeing right now probably don’t even come close to what actu­ally happened during that time period.”

The actors and production team came together to offer an experience to viewers that is second to none. 3D has become such a big fuss over the last few years but Django Unchained does not need effects to make you feel like you are right there with the characters as they try to overcome a world of hatred. The film has been nominated for five Academy Awards, including Best Picture and Best Original Screenplay. I give it 4 out of 4 stars. Go see it! Just make sure you go to the bathroom first.