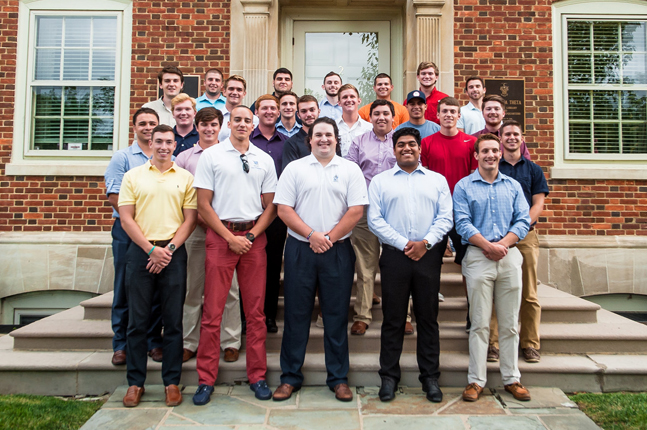 A new set of letters are coming in the near future, as Phi Delta Theta (PDT) is looking to become the twelfth Greek organization on campus. The new fraternity was established in 1848 at Miami University in Ohio.

Alex Atkinson, a representative of PDT, said Phi Delta Theta Fraternity will give students a new opportunity to stand out and lead with purpose. It allows individuals to take what they learn in the classroom and apply it within a real-life, entrepreneurial experience.

With PDT being the twelfth Greek organization on campus, it’s important for the organization to differentiate itself from the others. “Phi Delta Theta is a premier fraternal leadership development organization,” Atkinson said. “Phi Delta Theta philanthropy and community service are essential to the Phi Delta Theta experience, and one of the many ways Phi Delta sets itself apart from other fraternities and sororities. In fact, our open motto is: ‘We enjoy life by the help and society of others.’”

The fraternity’s philanthropic focus is to leave Lou Gehrig’s Disease (ALS) “better than we found it,” according to Atkinson. Baseball legend Lou Gehrig was a member of Phi Delta
Theta at Columbia University in 1921. The Fraternity’s support of the LiveLikeLou Foundation, which supports ALS research, patients and their families, enables it to make an impact on the disease.

Each PDT chapter has the opportunity to create unique events that impact the cause,
according to Atkinson. Individuals can work to become Iron Phi which is the mission to
strengthen the Phi Delta Theta International Fraternity and the impact it has on the fight
against Lou Gehrig’s disease through fundraising and athletic efforts of its members who
challenge themselves to achieve a personal goal and raise funds for ALS in the process.

PDT has been operating for over 170 years. The organization has expanded to over 275
campuses and initiated more than 270,000 men. Some students have had various reactions to a new Greek Organization coming to their campus.

“I’m excited about possibly joining because it’s like a clean slate fraternity because they don’t have a tradition here or anything. I imagine they’ll be more laid back and chill,”
Jordan Geogiano, a junior history major, said. Since some students are in favor of PDT, it’s important to know what else it has to offer.

“Starting a chapter of [the] Phi Delta Theta fraternity is the perfect opportunity to develop the skills needed to be successful in their [student’s] career,” Atkinson said.

Founding members will be challenged to create a legacy of excellence that differentiates itself from other organizations on campus. PDT has laid a foundation for the success of various careers. Connecting members to the over 6,000 local alumni is just the start to how PDT’s network can set student members up for success.

As of Feb. 11, 2020, PDT has 191 chapters and colonies, along with approximately 178,000 living alumni and 100 alumni clubs in the United States and Canada. The Fraternity operates from its General Headquarters building on South Campus Avenue, across from Miami University in Oxford, Ohio. It stands by the pillars of the cultivation of friendship among its members, and the personal attainment of a high standard of morality, according to Atkinson.

PDT will begin its recruitment this semester with the goal to have an established group up and running by the end of the semester. Students interested in joining can look out
for PDT’s scheduled introductory meetings or they can contact Atkinson directly at aatkinson@phideltatheta.org.