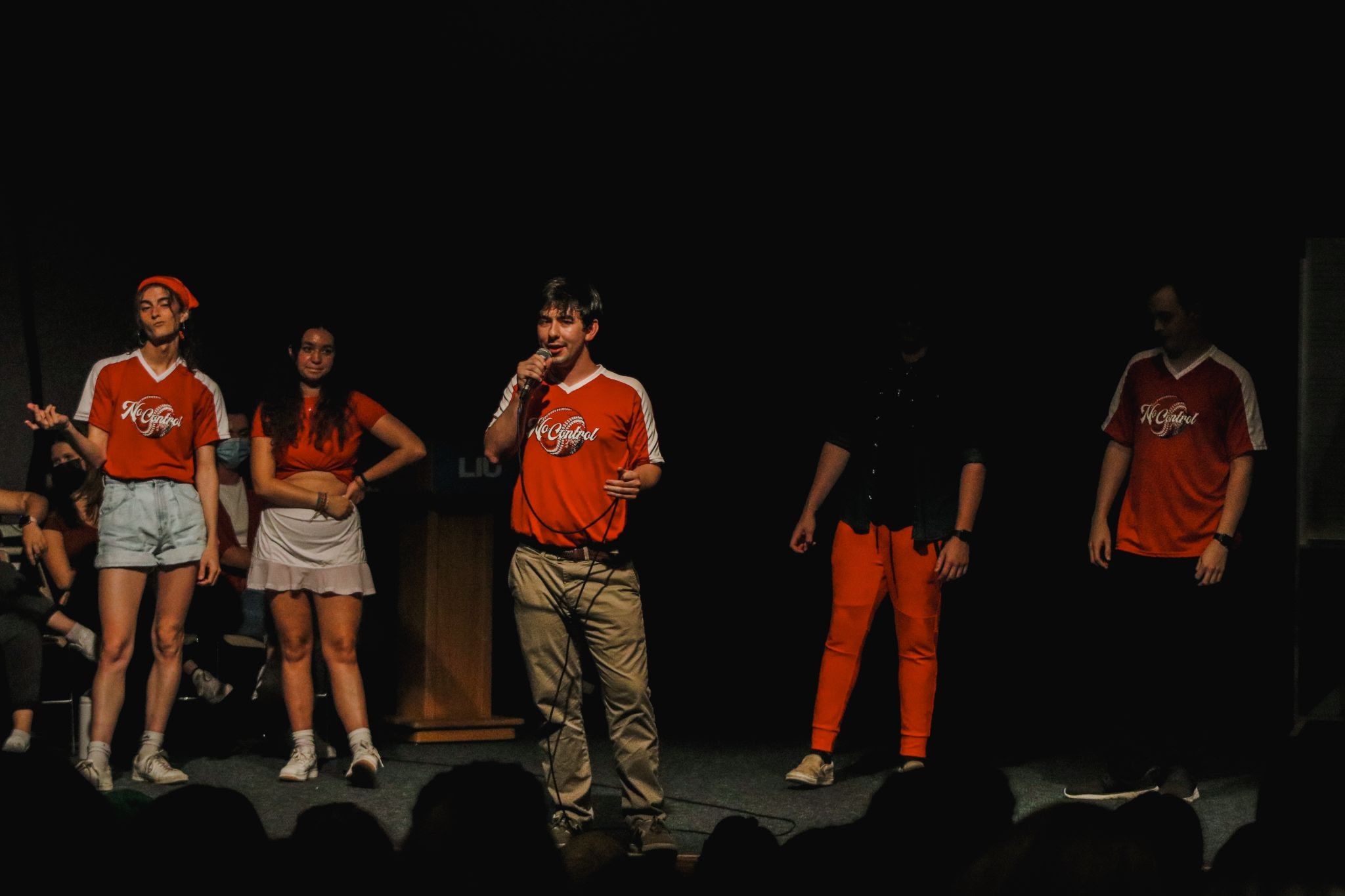 No Control is Back, Are You Ready?

After over one year of distance, zoom, and a virus keeping campus’ only improv troupe apart, they are back together. No Control had their last in person performance on Feb. 14, 2020. Since then, they have been making students laugh over zoom and from well over six feet apart.

Similar to many clubs on campus, No Control has been abiding by strict rules in order to keep everyone in the troupe and the audience safe.

Everyone performing is required to receive a negative COVID-19 test at least 72 hours before they perform, and all members of the troupe are staying at least ten feet away from audience members at all times.

With these rules in place, No Control members can perform without masks, something that has not happened nearly anywhere in the world since the beginning of the pandemic.

Senior theatre arts and international relations major Matthew Sporrer has been a part of No Control since his freshman year. He is ecstatic to be back performing on a stage.

“The reason that I did theatre for so long was the audience, so then losing that aspect was really hard, but then bringing that back, I just can’t wait,” Sporrer said.

On top of senior members such as Sporrer, the troupe has also added two new members this semester.

“I’m looking forward to seeing how our new members grow and develop because they’ve had their rehearsals but they’ve never really seen what this is. I am also excited to see the freshmen and sophomores sit in the audience,” Sporrer said.

This will be the first in person performance that any freshman or sophomore will have been able to attend, as all No Control and Post Theatre Company shows were filmed or produced on zoom last year.

“As much as no theatre really works over zoom, Improv works even less. Because improv is 100% reliant on being in a room with each other, and being able to quickly respond to each other and play off of one another,” Sporrer said.

Sporrer is excited to be in a room where wifi and connection issues won’t be a problem.

Other members of No Control are specifically excited for the energy a live audience brings during an improv show.

“Improv is so interactive with the audience, it’s really a conversation between you and the audience, more than any other show I would say. They are directly involved. They are asked, “What is the show you want to see?” masters business administration student and No Control member Steven Prestia said.

Prestia joined the improv group his sophomore year of undergrad, and has seen it grow throughout the stages of the pandemic.

“It’ll be good to get that catharsis out yet again for this coming year,” Prestia said.

Prestia is ready to perform, and cannot wait to get to the other shows that No Control has in store for this year.

Throughout this transitional period, the co-presidents of No Control have been finding ways to prepare their troupe for an audience without the physical presence of one.

“For half the troupe this is their first time in front of other people ever, and so we told them all that we could, and prepped them with all the games but ultimately, we just have to put our best foot forward,” senior acting major Steele Whitney said.

Whitney makes up one half of No Control’s leaders, along with his co-president Jordan Horne.

“We’re showing everyone what we can do. We’re trying to highlight our two newest members. It’s really about bringing back the laughter and good times that we used to bring to LIU,” Whitney said.

Whitney is finding ways to balance safety and entertainment with the troupe during this time. By following all of the university provided rules, he feels confident that the troupe is being as safe as possible.

“We’re actually doing more than Broadway in some ways as they are closer to the audience than we will be,” Whitney said.

As for the future of No Control, Whitney is looking forward to upcoming performances and having fun with the troupe once again.

“We want this semester to be about getting the troupe to a place of comfort in front of an audience and remember for ourselves what that feels like so that way next semester we can really knock it out of the park,” Whitney said.

If you missed Saturday night’s show, be on the lookout for upcoming performance announcements. Sporrer, Prestia and Whitney promise the next show is one you won’t want to miss.