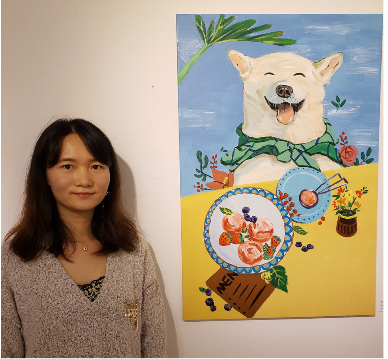 The source of an artists’ inspiration can be anything from major life events to their loved ones. For Shengqi Wan, third year MFA student, her inspiration was man’s best friend. Wan’s dog-themed exhibition showed in the sculpture gallery from Oct. 12-18 with a reception on Wednesday, Oct. 15. Paintings and drawings of canine companions doing human-like activities lined the walls, showing the best of two years worth of work.

“I love dogs, so you see all my works are cute, and they all have their own personality,” Wan said. She owns a poodle named Meng Meng, which means “adorable” in Chinese, and this concept of cuteness played into her artwork as dogs were depicted doing things like eating potato chips and watching TV. “They’re doing human things, just like me,” Wan said.

“The way she presents these dogs is almost very personable. You don’t see it as a dog anymore; you see it as any of your friends,” Seung Lee, professor of art, said.

Wan also has an international-themed series of dog drawings where elements of different cultures influenced the pieces. A charcoal drawing titled “French Bulldog in Italy” depicts a bulldog wearing a t-shirt featuring the Leaning Tower of Pisa, and holding a plate of pizza. The Italian flag as well as typical fashion and cuisine icons surround the drawing’s subject. “I love their [French bulldogs] funny face, and they give me a lot of inspiration,” Wan said.

All of the drawings in the series were done in charcoal, Wan’s preferred method, because the black color creates a strong contrast on white paper. She can also finish a charcoal drawing fast, compared to working with a graphite pencil. One of her drawings took about half an hour to complete. “For the drawings I finish quickly, but for the paintings, it takes one or two days,” Wan said.

An acrylic painting called “Big White” shows a white dog with a happy expression as it sits in front of a plate of fruit. This one is Wan’s favorite. “I love the smile and the color is really bright,” she said. Most of the dogs are depicted eating food; not only does Wan herself enjoy eating, but she believes it’s something that makes people happy. Desserts like donuts and cake appear often in the series for this reason.

Learning about art history during her time in the MFA program also helped Wan create her pieces. Many aspects of her work were inspired by several famous artists, including French painter Henri Matisse and contemporary artist Yayoi Kusama.

As one of Wan’s professors, Lee witnessed parts this series evolve over the course of his class. “I had her in MA, and she wasn’t doing this type of work,” he said. “Then she came to MFA, and she clicked onto this dog series, and it’s been growing since.” Wan’s work is more sophisticated now, according to Lee. “It’s not just a cute dog. Even though she started [with] cute dogs, it keeps developing,” he said.

“I want people to think of their own dogs when they see my work. I want to show the beauty of dogs,” Wan said. Those interested can see more of Wan’s work by following her on Instagram @shengqiwan_art.