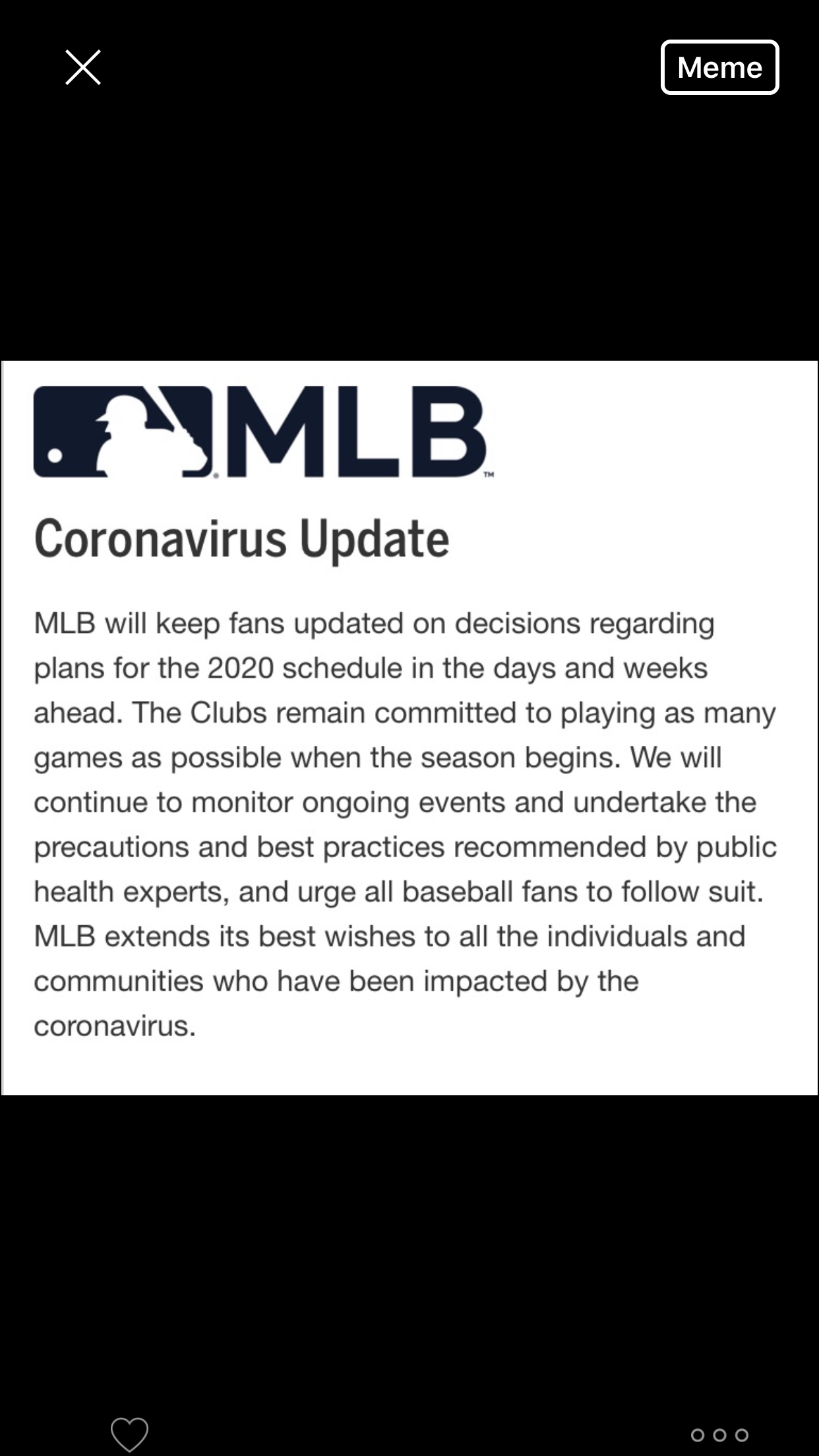 Major League Baseball (MLB) is one of the sports organizations affected by the new coronavirus outbreak. Unlike many other professional sports leagues, the MLB has yet to begin their season, and no one knows if there will be a se ason at all at. The MLB and Major League Baseball Players Association(MLBPA) negotiated a deal on Tuesday, March 31, for different season scenarios.

One option is a shortened season, in which players will be paid the portion of their salary for the percentage of games that are played. Meaning, if the season is cut down in half from 162 games to 81, all players will get half of their original salary. If the entire season is canceled, the MLB and all 30 team owners will put together a lump sum in advance of $170 million, which will be divided up and disbursed accordingly by the MLBPA.

Players will also have one year of service time removed on their contract no matter what. Players with one year left on their contract will automatically become free agents, and players who have multiple years left, will have their service time count for this season. In other words, players do not have to wait an additional year to either become a free agent or reach the next level of arbitration.

Ryan Kraut, a senior broadcasting major, agrees with the way the MLB is handing players monetary compensation, but disagrees with their stance regarding service time.

The group hit the hardest by the new agreement will be prospects looking for a chance to play professional baseball. The MLB Draft, which typically holds 40 rounds, will only carry five rounds this year. This will lead to over a thousand high school and college-level athletes missing out on the chance to be signed by an MLB team.

It was announced on Tuesday, April 7, that the MLB was working on a deal with the MLBPA and federal health officials including the CDC to get baseball back as early as May.
The plan would include all 30 teams flying out to Phoenix, Arizona, and using the facilities there to play the entire season, or as long as needed. These facilities include the Arizona Diamondbacks’ Chase field, as well as all the spring training stadiums, and possibly college fields if necessary.

If this proposal is accepted by all parties, there will be many stipulations in place to ensure everyone’s safety and health. To minimize contact as much as possible, an electronic strike zone will be implemented, so umpires that may be older can be six feet behind the batter and catcher. The games will be played without fans in the crowd, and players will be seated in the stands six feet apart, rather than together in the dugout, and mound visits will not be allowed mid-game.

The most crucial element of the plan is that players will not be able to see their families, or go home through the duration of the Phoenix play. Players will only be allowed to go from their respective hotels to the fields to limit contact with anyone outside their organizations.

While the MLB and every team will be losing so much revenue from loss of ticket sales, various news outlets have brought up the possibility that they will gain revenue from extra TV deals. Currently in place, the MLB has national game coverage partnerships with ESPN and Fox, but several sports media sources say it is plausible that other major networks will be eager to display Major League Baseball games, as it will be the only sport broadcasted live.

Kraut is also worried about the broadcasting of the games from different time zones across the country, as well as how some teams will make up the revenue from playing at neutral sites.

“Some negatives are that it could impact TV ratings for those watching on the east coast,” Kraut said. “All the teams would take a hit financially due to no ticket, concession or merchandise sales.”

Kevin DeLeonardo, junior business administration major, is very optimistic about the future of baseball if the proposal is implemented.

“They would probably broadcast more games than they usually do, so that would be good for baseball fans like me that normally could only watch two or three different games every day,” DeLeonardo said. “If this plan does get implemented, baseball would most likely be the first sport to return, so it would provide an extra incentive for new fans to watch and it would bring more attention to baseball.”

A higher risk of player injuries is one scenario DeLeonardo believes could become a possibility.

“The biggest negative would be for the pitchers because they won’t have the normal warmup period they usually have to prepare for the season,” DeLeonardo said. “That could lead to more injuries if they push too hard too fast.”