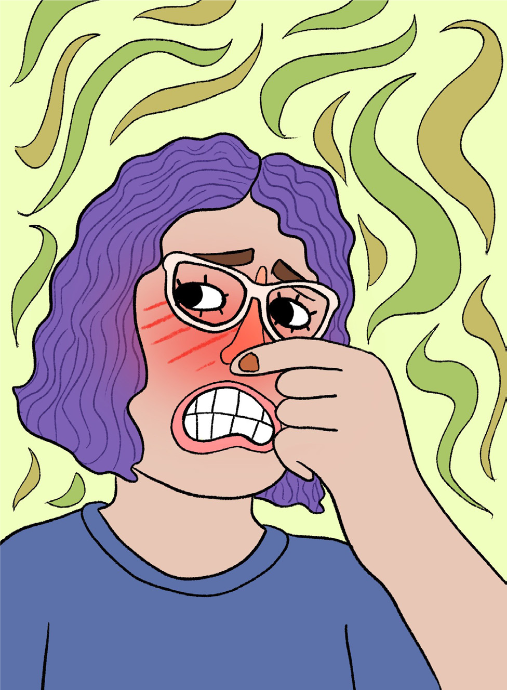 Many residents living in Kings Hall are becoming aware of the presence of mold in their dorm rooms and residence hall. Students are concerned for their health and believe the mold is causing an endless cycle of sickness in their building.

An emergency evacuation occurred in suite room 104 on the first floor of Kings Hall on Tuesday, Oct. 1. A strong stench emerged overnight, according to Russel Drowne, a freshman game design major who lives in the suite with his two roommates. “[The smell] was just rotten. That’s the best way I could describe it; and you couldn’t really tell where it was from because it was just everywhere,” he said.

After cleaning out the entire room and not finding the source of the smell, the three suitmates brought the issue to an RA’s attention. Two days into the investigation, the three freshmen were informed via email that their room was “deemed unlivable” and were advised to find a new living situation for the time being, according to Drowne. He reached out to the Promise Office regarding new dorm and they gave him some options to choose from.

It’s still unclear what the origin of the smell is, but Drowne and his previous suitemates suspect it’s either the result of mold or a dead animal in the pipes underneath the flooring in the middle of the room. “I think other people are getting [mold] in their rooms too because I know my room is not the first that’s having issues,” Drowne said.

Although, Drowne was unable to provide information on other residents experiencing mold problems, he said he’s certain there’s mold in the laundry room. Kelly Crowley, a freshman psychology major and resident of Kings Hall, noticed it too. “It’s all over the laundry room and it’s even starting to smell,” she said.

RA’s living in Kings said they were not allowed to provide The Pioneer with any information regarding mold in the building. Roy Fergus, head of facilities services, was unable to be reached for comment.

Complaints about mold in residence halls is nothing new, and many students are concerned it’s causing their constant sickness. Rabecca Baze, a freshman biology major who also lives in Kings Hall, believes the mold is harming her and her roommate’s health. “There is mold downstairs all over the laundry room; on the ceiling [tiles]; and it’s spreading through the vents,” she said. “My roommate and I think we are getting sick from it.” Baze was unable to provide evidence of the mold spreading into the vents.

Baze claimed she and her roommate have been sick for weeks, and she’s convinced the mold is the cause. She believes the mold has affected other Kings residents as well. “If you walk down the hall, you can hear different people sniffling or coughing, and it’s kinda gross,” Baze said.

Apparent renovations have taken place around campus, including paint jobs, signage and updated athletic fields. Baze has noticed such changes and believes the school’s choice to neglect the resident halls is unfair. “I hate to say it, but [the school] puts more effort into changing the outside looks of it, over what’s actually inside,” Baze said.

A freshman fashion merchandising major, who wished to remain anonymous, agreed with Baze, and said, “It’s upsetting to see that the school doesn’t care about our health as much as it cares about painting Humanities [Hall].”

Baze met with the head of residence life, Maegen Wallaker, on Monday, Oct. 14, about the issue. Wallaker explained that she knew of the mold, but was shocked to hear that it wasn’t fixed. According to Baze, Wallaker informed Baze that a request was sent out approximately two to three weeks ago to address the situation. Wallaker provided Baze and her roommate the option to move out of Kings Hall into Nassau Hall because of the issue.

It is still unclear when or if the mold issue will be fixed for the remaining residents in Kings Hall.