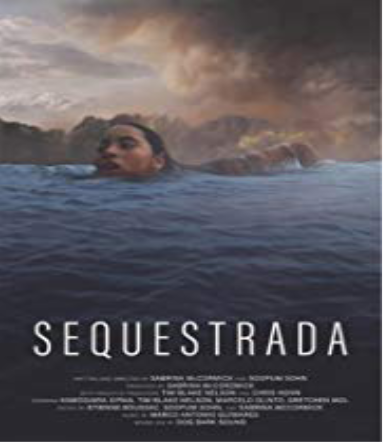 “Sequestrada” takes place on an Amazonian reserve where the government is building a dam that will displace indigenous people. The film follows three stories: Kamodjara, a daughter of a tribe member who gets separated from her father and is kidnapped by traffickers; Thomas, an American investor of the dam who helps Kamadjara get back to her family; and Roberto, a bureaucrat in the indigenous agency who goes to the Amazon to help protest the dam. All three characters are connected through this environmental tragedy.

To accurately portray Indigenous lifestyles, Sohn and his team visited the Amazon four times and worked on the film over the course of four years. They hired many indigenous actors to play roles that portrayed their own lives. Because of the personal significance of the film, many of the scenes throughout it were improvised and unscripted.

It was important to both Sohn and Sabrina Mccormick, who co-directed the film, to maintain a sense of reality of what life in Brazil was like for these people. They did so through small examples, such as showing local modes of transportation and wildlife that live in the Amazon. One example shown in the film was the tragic reality of sex trafficking in Brazil, which they said was an essential addition.

“In energy boom towns, there is often a lot of trafficking… there is a variety of social problems, one of them often being the rise of prostitution, sex trafficking [and] child trafficking, and that’s also true in this town,” Mccormick said. It is such a common issue that some of the scripted scenes involving sex-trafficking were based on some of the indigenous actors’ own experiences.

The film is based on the Belo Monte Dam which was built in 2011 and made operational in 2016. The dam was built on the Amazon’s Zingu River and displaced tens of thousands of indigenous people and forced them to give up their fishing livelihoods.

The dam destroyed large areas of the Amazon rainforest and caused the extinction of several rare species of animals and plants. The movie is set on the backdrop of this dam, and by doing so touches on the issues of climate change and the displacement of indigenous people.

“What the science shows is that the areas of the Amazon that are best protected are those where indigenous people have rights to protect them, and it’s not just in this case of the Bel Monte dam but many other cases of large scale development where indigenous people are fighting literally to the death,’’ Mccormick said. Climate change goes hand in hand with the rights of indigenous people, according to Mccormick, so it was imperative for them to connect both issues in the film.

“Sequestrada” is Portuguese for kid-napped, one of the film’s major themes. “One kidnap[ping] triggers following kidnap[pings],” Sohn said. “The first kidnapped victim is [the] Amazon rainforest.” The physical kidnapping of Kamodjara parallels the environmental kidnapping of the rainforest, creating a comprehensible parallel for viewers. This issue is important to Sohn. “Climate change is a threat of our existence and destroying [the] Amazon rainforest is the mistake,” Sohn said. “The world needs to know this.”

Students still have a chance to see Sohn’s film at the Village East Cinema in lower Manhattan on Thursday, November 21. There will be a Q & A with the directors after the 7 p.m. showing. Tickets are $15 and can be purchased online at citycinemas.com.