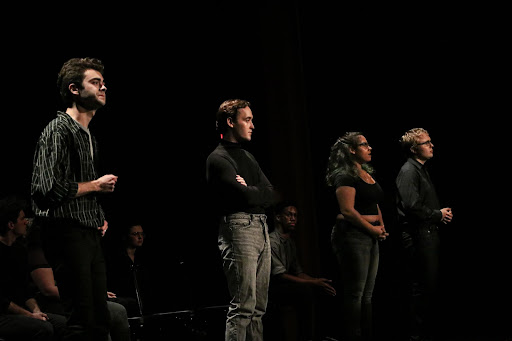 On Friday, Oct. 29, The Post Theatre Company (PTC) gave the first of 5 performances – spread over the course of the weekend – of “The Laramie Project.” Directed by Gabriel Vega Weissman, the show featured 20 performers portraying more than 60 characters; each actor inhabiting multiple characters.

“The Laramie Project is a show based on true events. The show was created in response to the brutal murder of Matthew Shephard, a 21-year-old college student, in Laramie, Wyoming. The play was created by the Tectonic Theater Project, and was first performed in February 2000. Tectonic went to Laramie [and] conducted  over 200 interviews [with the] goal of collect[ing] the testimonies of the people living there,” read the dramaturgical note by junior musical theater major Liv Magaraci. The transcripts of these interviews were transformed into the play “The Laramie Project.”

Twenty years after its first performance, “The Laramie Project,” and the concepts and conversations it highlights, still hold significance in today’s society.

“It is a play about people and community and how life affects a community and the many different dimensions to community. […] I think it’s a conversation of listening not to react […] Listening to understand and speaking to be understood. Focusing on empathy is a major theme of the story,” junior musical theatre major Saffron Cooper, who plays the roles of Zubaida Ula, Anonymous friend of Aaron McKinney, Tiffany Edwards, Lucy Thompson and Email Writer in the show said.

Other members of the cast shared similar thoughts on the importance of the theme of community in the play.

“I think it’s trying to get people to talk about a hope for change and this idea that we need to come together; that community is stronger than anything,” senior musical theater major Devin Butera, who plays the roles of Doc O’Connor, Matt Mickelson, Conrad Miller, Russell Henderson and Juror in the show, said.

Playing multiple characters in one play and making them distinguishable from each other, without any wardrobe or makeup changes is no easy feat. The actors had a lot to say on this challenge and how they overcame it.

“It makes the show fascinating. It requires physicalizing differences; changing body stance and voice and speaking patterns. [..] The narrators help in translating to the audience what’s happening. […] The Tectonic Theatre Project did a great job of capturing differences between characters in writing. This helped me become more texted oriented as an actor. Empathy is very important. Removing judgement is the only way you can make your character a real person. It takes digging and really listening to the page,” Cooper said.

“The Laramie Project” deals with heavy subject matter as the gruesome details of Matthew Shephard’s murder are recounted in the play and the raw emotions of members of the Laramie community are vividly portrayed by the actors. The actors shared their thoughts on the importance of the play and others like it that explore complex, dense and important concepts.

“I think material like this is important and has a really strong impact if done correctly. Would love to put myself into projects that are raising awareness for change. All artists are trying to use their art to make beautiful change,” Butera said.

However, fully immersing oneself in the world of a play that deals with such heavy subject matter is not an easy job for actors. The actors in the show shared their thoughts on what is required of them to transform into their characters and how they prevent it all from being too taxing on their mental health.

“I’m required to bring who I am as a person and my life experiences to the table. I have to relate circumstances and the sensation of those experiences and allow them to come into the character. We have to allow openness to what’s happening, it can be overwhelming but, we have to live in it. […] I can’t shut myself down and try to control everything or it wouldn’t be a truthful performance,” Cooper said.

Butera connected his body and mind to the text in order to stay grounded during this show.

“I take a lot of the words and put actions into the lines; connecting them to my body physically and trying to find intention in the lines. A lot of personal sourcing was required to put myself into the same headspace my character is in, but not to a point of distress where it becomes overwhelming and I can’t work,” Butera said.

As important as it is for the actors to transform into their characters, stepping out of that world and giving themselves time to unwind is equally important.

“At the end of the day it’s acting. […] You have to have a level of desensitization. Just as you allow yourself to feel, you have to be objective and say this is a real thing that happened but, we have to move forward. It’s exhausting to relive it every night but you need to put as much energy to get yourself out of it or you’ll go to a dark place,” Cooper said.

The actors have also credited director Weissman with a key role in getting the best performances out of them and cultivating a safe and professional space.

“The way the director sets up the space, he sets a very safe, warm environment for everyone. […] He gave actors time to process what was going on.” Butera said.

Though challenging, being in the play has been a rewarding experience for the actors.

“It’s been a great exercise in faith in the process […] Experiencing and seeing this all first hand has greatly evolved how I view the work we do here. […] Exploring theater as a vehicle for change and being able to live it. It’s helped me become a stronger, more understanding artist and made me more empathetic,” Cooper said.

Butera has discovered much about himself through the process as well.

“I have developed my own awesome and articulate process for dealing with text, especially heavy text. I’ve gained so much knowledge on how I work in a play environment. […] I’ve developed a different perspective on the idea of community. It’s been a hectic but rewarding experience,” Butera said.

There is a lot to be learned from and understood about “The Laramie Project” and the actors shared their thoughts on the lessons of empathy and importance of community they hope audience members gain from their viewing experience of the play.

“It’s hard to gauge expectation as a creator […] and audience has different intentions of what they want. But my intention behind doing this play is that people see how the conversation isn’t black vs. white or gay vs. straight or liberal vs. conservative, it’s about being a human person and every person has both good and bad in them; we are all made of both light and darkness. It’s a spectrum; a sphere. We are not limited to one dimension of our beliefs and people are so much more complex than that.[…] Art exists to promote empathy in a world that is ever judgmental.” Cooper said.