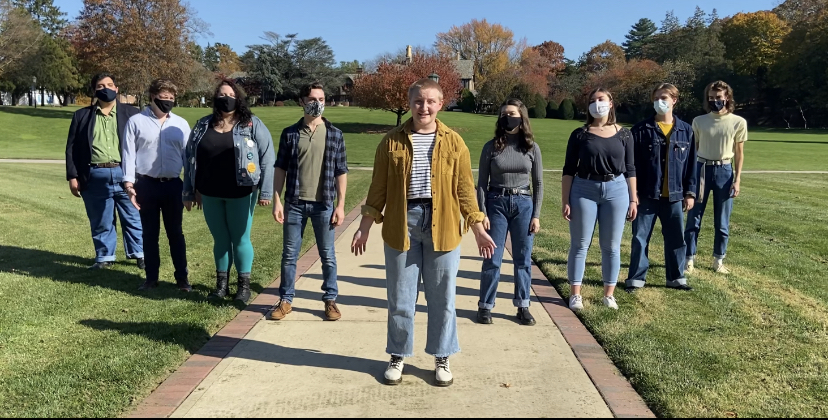 Beginning Dec. 2, Post Theatre Company (PTC) is set to stream “One More Thing Not To Think About.” This show will consist of songs from musicals written by the famous composer Stephen Sondheim. The show is being directed by Benita de Wit, a New York based Australian director. Their credits include numerous off-Broadway shows as well as directing at many universities. They are joined by Debbie Tjong. Tjong is the music director of “One More Thing Not To Think About.” According to Kira Avarett, a junior musical theatre major, Tjong is working on both this show and the upcoming “Tick, Tick… Boom!” movie directed by Lin-Manuel Miranda.

“Benita and Debbie are fabulous to work with. Benita has a truly unmatched energy and this would have been a much more difficult process had we not had someone who is so understanding and so incredible to work with,” Kevin DiCarlo, a sophomore musical theatre major, said. “Their positive spirit was so necessary during this time. Debbie is the most professional and enjoyable music director and makes learning music online feel like we’re in person together again. PTC really pulled out all the stops with this production team and I am truly privileged to be able to work with them.”

Avarett is excited to be working with a director who is new to PTC.

“The amazing thing about bringing in outside professionals is that it gives us the opportunity to apply the Post-taught acting process to a show led by someone who may not know that process. It’s a learning experience with independence, communication and adaptability. Specifically with this show, it’s been incredible to work with Benita,” Avarett said. “As a director, they bring both amazing, collaborative ideas, and great energy to a working space, even if that space is a Zoom call. They have done so much work to make something conceptually large and looming as Sondheim accessible to us as college students who are just figuring our lives out.”

The show itself will follow the theatre students’ lives during the ongoing COVID-19 pandemic.

“The show is simply about us. We are using music & lyrics written by Stephen Sondheim, but we are decontextualizing them to fit our personal narratives, and following the structure of our collegiate lives,” Avarett said. “It’s about us as college students, us as part of social groups, us as artists and just us as humans.”

Due to the ongoing pandemic, this show has been rehearsed and mostly filmed in a remote setting, with only one weekend of in-person filming. Working on a musical production through this process has been very different according to members of the cast.

“Rather than rehearsing in the studio spaces, I spend most of my time recording video and audio for the video editor in my room,” Dicarlo said. “Our director is doing an incredible job of making this rehearsal process feel as similar to a regular rehearsal process as possible and our music director has developed a really fun way to still conduct music rehearsals over Zoom.”

As this was Avarett’s first time in an online production, it has become clear how in-person and online shows are different from one another.

“In a live rehearsal process, you’re very aware of exactly what a show is going to look like. You get to view and experience the structural elements as they’re built in-person,” Avarett said. “With a show based on filming and recording, none of us know exactly what our performances will look like post-production.”
Students who are interested in watching the upcoming production of “One More Thing Not To Think About” should follow the PTC Instagram, @liuposttheatrecompany for more information.