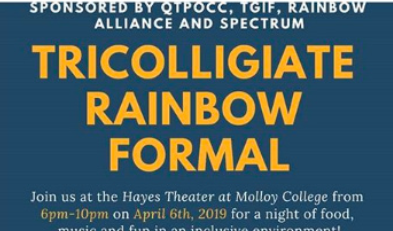 Rainbow Formal: A Prom For Everyone

The Rainbow Alliance will host its first ever Rainbow Formal with the LBGT organizations at Hofstra University and Molloy College on Saturday, April 6 from 6 p.m. to 10 p.m. A shuttle bus will transport students to and from the event at Molloy College, free of charge. The bus will leave from Hillwood Commons at 5 p.m.

The Rainbow Formal is a prom-like event where students can have fun and be themselves while enjoying a DJ and food. The goal of the event is to provide an inclusive space where students don’t have to worry about being judged for who they are.

“One of the original reasons why we thought about something like this is [because] some of our members, and a lot of other people, said they had a bit of discomfort when they went to their proms at their high schools and being apart of the LGBT community,” Nicholas Frank, a sophomore game design major and vice president of the Rainbow Alliance, said. “Sometimes they wouldn’t even allow couples. So for we are really trying to say bring whoever you like.”

Being yourself isn’t the only thing that is encouraged; students are encouraged to dress as they like as well. “ attire is encouraged, but we want people to dress how they want to express themselves, so if someone shows up in a cowboy costume, no one’s going to stop them,” Nicole Ludwig, a sophomore psychology major and president of the Rainbow Alliance, said.

A $1 minimum entry fee is required, but students are welcome to give more. All proceeds will go to Safe Center Long Island, a nonprofit organization that provides services to victims of abuse. The clubs sponsoring the event will pay for it

This will be the first time the event is being held, but if it goes well, the Rainbow Alliance officers hope to host it again, and possibly to hold more events in conjunction with other schools. Students who wish to attend the Rainbow Formal can email Nicholas.Frank@my.liu.edu or Nicole.ludwig@my.liu.edu