After 20 years in baseball, Yankee captain Derek Jeter played his final game on Sunday Sept. 28, against the rival Boston Red Sox in Fenway Park. Jeter legged out an infield single in the third inning, plating a run in the process, and ending his baseball career as he got a pinch runner. The hit was the 3,465th of his career, good enough for sixth place on the all-time hits list, behind four Hall of Famers and the infamous Pete Rose. 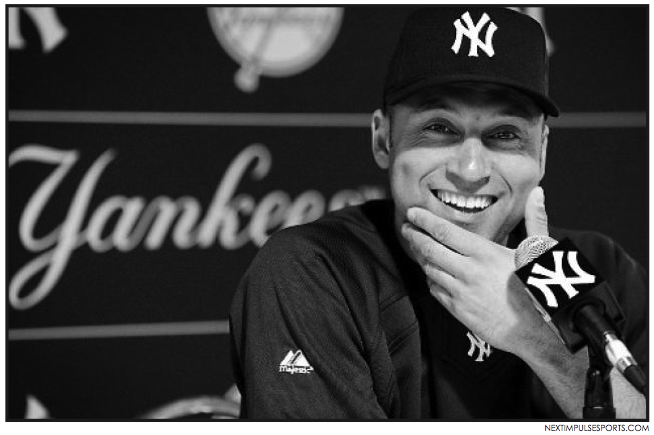 Jeter came up in the Yankees organization in the mid-1990s and became the backbone of multiple championship teams. In his 1996 rookie season, he batted .314 and led the team in hits, well deserving of winning Rookie of the Year honors. The Yankees went on to win the World Series in six games over the Atlanta Braves that year.

A few years later, a few more rings for Derek. In 1998, The Yankees, as a team, had the best record to that point in baseball history. They finished a staggering 114-48 and had a 22-game lead on the second place Red Sox at the season’s end. Right smack in the middle of that great season was Jeter. Jeter, then 24, posted a .324 batting average and led the American League in runs scored with 127. The Bronx Bombers capped off an impressive season with a sweep of the San Diego Padres in the World Series.

The following year, 1999, saw a lot of statistical highs for Derek. He totaled career bests in: hits with 219, home runs with 24, and RBI with 102. Not to mention he also batted .349. The amazing year for Jeter helped propel his team to the Fall Classic for the second straight year, and the Yankees defeated the Braves once again, this time in four games. In 2000, Jeter continued his stellar play and led his team to the World Series for the third straight year, fourth time in five years. The matchup that time was the city rival New York Mets. Jeter stepped up to the challenge in that World Series, making big play after big play. From relay throws to nail runners at the plate, to big home runs which helped seal a fourth title, Derek never felt uncomfortable in the big moments. The big plays made by Derek made it an easy choice to nominate him as the World Series MVP of 2000.

Seeking a fourth straight title in 2001, the Yankees put baseball in the backseat to grieve for the families who suffered losses during the September 11th attacks. The attack on the country had people turning to sports in order to help them forget their problems. They found the Yankees as a way to feel normal again. With lots of support from fans, the Yankees, led by Jeter, made the playoffs and seemed poised for a big run. Perhaps the signature play of Derek’s career came in game three of the 2001 ALDS against the Oakland Athletics. With the Yankees trailing two games to zero in the series and facing elimination, Jeter helped preserve New York’s precious 1-0 lead by making a play on a relay to nail a non-sliding Jeremy Giambi at the plate. The Yankees went on to win the series and advance to the World Series. While the Yankees lost the World Series in seven games, Derek became known as “Mr. November” with a walk-off home run as the clock struck midnight, becoming the first player in baseball history to hit a home run in that month.

A few years later, in 2004, Jeter wrote another chapter in his already historic career. In a regular season game against the Red Sox on July 4, 2004, Jeter made a catch over third base and his momentum took him face first into the stands. The play showed Jeter’s determination, effort, and hustle as he sacrificed his body to make the play. With his face beat up and bloodied, he was forced to exit the game, which the Yankees went on to win.

Jeter came to the park every day—and he came to play. Thirteen times during his career, he played over 150 games a season, showing his durability and strength. In September 2009, Derek passed the Iron Horse, Lou Gehrig, on the Yankees all-time hits list and became number one on the team in hits. The hit was a typical Jeter slap shot to the right side passed a diving infielder. Jeter batted .334 on the season, the first one in the new Yankee ballpark in the Bronx, and earned another championship, his fifth in total.

Two years later, in 2011, Jeter looked to etch his name in history yet again. This time, he was shooting for hit number 3000. The number 3000 in baseball is very special, as only 28 players have ever totaled that many hits. It is an exclusive club to say the least. Of the 28 members in the club, 24 are in the Hall of Fame, while the few others are said to become. In 2011, on a hot July afternoon in the Bronx, sitting on 2,999 hits, Derek Jeter smacked a home run to left field off all-star pitcher David Price for his 3000th hit. The magical moment at the stadium seemed as though it was scripted, but it was typical Derek Jeter. For all the drama surrounding Jeter and his quest for 3000, he had a down year by his standards, batting .297 and accumulating just north of 160 hits.

At the ripe age of 38, in 2013, the Captain had one of the best statistical years of his career. The old-timer played in 159 games, tying the most he’s ever played in, and led the Major Leagues in hits with 216. Jeter seemed to be able to withstand time, but an ankle injury forced him to miss the ALCS that year, and the Yankees went on to lose to the Detroit Tigers. After an injury plagued his 2013 campaign, Jeter saw two of his longtime teammates, Andy Pettitte and Mariano Rivera, both walk away from the game.

Derek Jeter came into the 2014 season with high expectations as he usually did, but it never clicked for him as he batted a career worst .256 in only his third season missing the playoffs out of 20. Jeter played in a grand total of four games during his entire career, where his team was mathematically eliminated from the playoffs. One of those four games came in 2014 on Sept. 25. The Captain played his last game in pinstripes and gave the fans a show. He went 2-5 with 3 RBI and the walk-off hit to write a storybook ending to his Cooperstown-worthy career.

Jeter’s numbers in the regular season speak for themselves, but his postseason numbers rival the greats of all time, as well. Jeter batted .308 in the playoffs and accumulated 200 hits on the button in 158 total games. When examining his career, he essentially played an additional year of baseball just in the playoffs.

As Derek Jeter rides off into the sunset, Yankee fans—and baseball fans in general—will remember him for being a winner. He was a likeable person who just came to the ballpark and worked his tail off. It showed on the field with all the hits and plays he made. As a kid, Jeter told everyone he wanted to play shortstop for the Yankees. He was one of the lucky ones; he got to live out his dream. He did it for 20 years, under the microscope that is New York, and he did it with class.