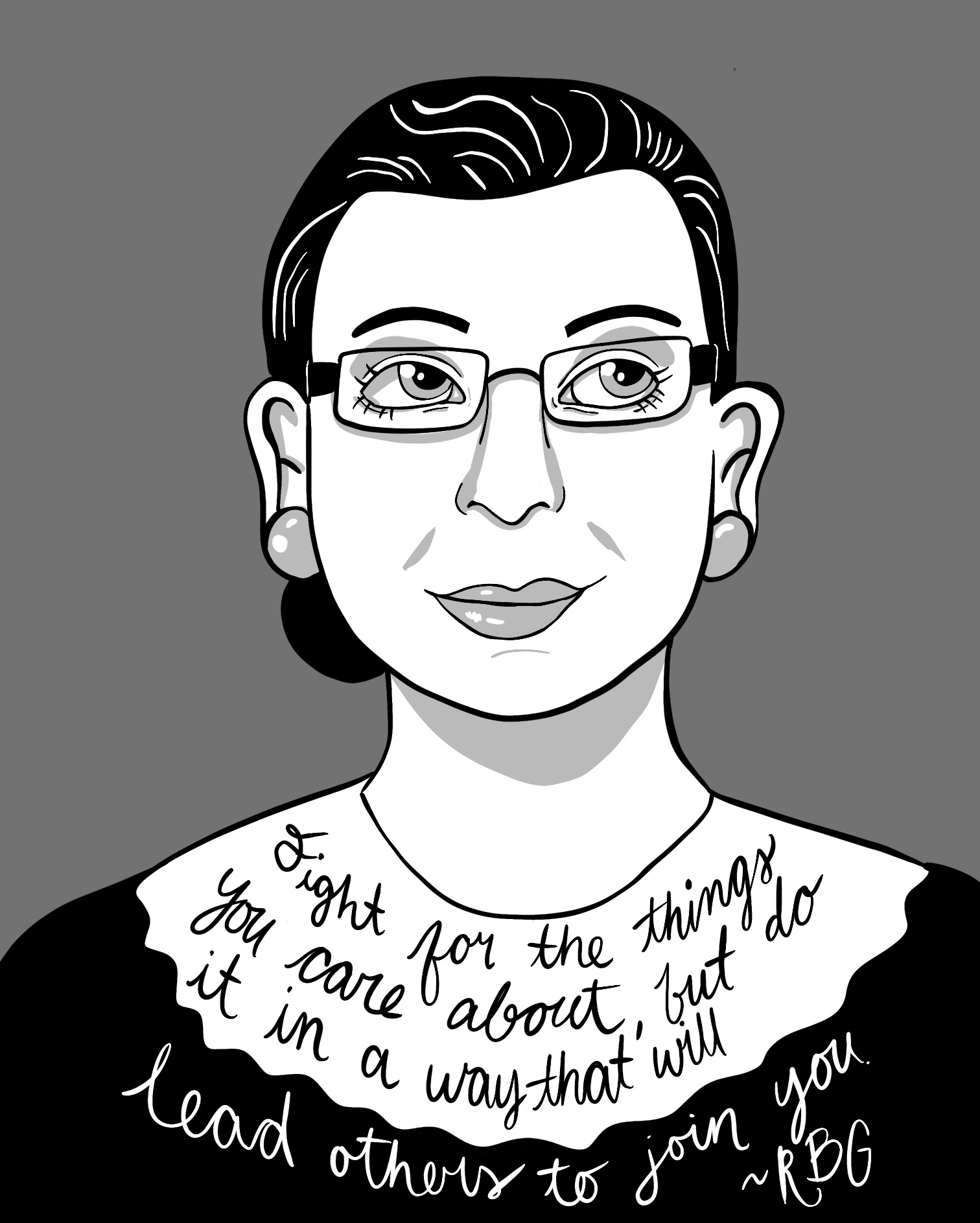 Ginsburg had defeated colon, liver and lung cancer during the course of her life, and was the oldest sitting member on the Supreme Court.

She was known for being a trailblazer for women in the workplace through law and politics. She attended Harvard and Columbia Law School, all while taking care of her child and husband, Martin Ginsburg, who was undergoing chemotherapy at the time.

Ginsburg directed the Women’s Rights Project for the American Civil Liberties Union in 1972, where she advocated for the fair treatment of women.

She was appointed by President Jimmy Carter to the U.S. Court of Appeals in 1980 and was later appointed to the Supreme Court by President Bill Clinton in 1993. At her confirmation hearing, she spoke at length about her support for women’s rights and abortion rights.

Before being appointed as a justice, Ginsburg argued six landmark cases on gender equality in front of the Supreme Court, winning five of them in order to eliminate legal barriers that held women back in both the workplace and in civic life.

The news of her death was shocking to members of the campus community.

“It was crushing to lose someone who has blazed so many trails in the law and has inspired so many people, especially, but not limited to, women,” Jeremy Buchman, a professor of political science and pre-law advisor, said. “And there was something ghoulish about seeing Mitch McConnell and Donald Trump rubbing their hands with glee about the prospect of filling her seat before she could even be buried.”

Former President Barack Obama waited a month after Justice Antonin Scalia’s passing before nominating Merrick Garland to be appointed to the Supreme Court.

Students were also deeply affected when RBG’s name made headlines.

“When I came across the news I stopped what I was doing to reread the headline to make sure what I was reading was real,” Hannah Winston, a sophomore musical theatre major, said. “My mother is a lawyer and has served as a judge. Women in law have always inspired me because it is such a testament of our raw power of fight and communication of our beliefs and morals to the world. My mother and I have always looked up to RBG as a role model because of her work with women’s rights and civil rights, but also because she persevered through all of the adversities life threw at her.”

“She was more than just a woman in congress,” Henderson said. “She was an inspiring leader to many people across the country. She worked constantly for over two and a half decades to bring awareness to numerous equality and environmental issues that were overlooked by many of the men in congress. She was a symbol of hope to so many people, myself included.”

Henderson further comments that Ginsburg has shed a light on the democracy that the United States has needed for so long.

“She taught me that I am more than just a girl, but I can be a leader in society. She’s shown me and so many other girls that we are worthy of the positions we earn in our community. That we can fight for what we deserve,” Henderson said.

While America mourns the death of a legendary feminist, both Henderson and Winston believe that the country can take away so much from Ginsburg’s legacy.

“I hope to one day have a fraction of the impact Ginsburg did in my lifetime,” Winston said. “People must remember that we have the power to demand and advocate for change, and that no matter our beliefs we can be like [Ginsburg] and be a kind and decent human being to all.”

Henderson hopes that this loss will encourage more people to advocate for what they believe in and participate in voting this election.

“Vote in order to take the steps necessary to become the place she envisioned and fought so hard to build,” Henderson said.

Buchman further commented on the work Ginsburg did to make her so inspiring.

“Ruth Bader Ginsburg accomplished so much at a time when the legal profession was overtly hostile to women. In her litigating and institution-building on behalf of using law to achieve significant social reform, Ginsburg was to legal rights for women what Thurgood Marshall was to legal rights for Black [people]. She fought tirelessly against public policy rooted in sex-based stereotyping, even on occasions where that stereotyping might be viewed as favorable to women,” he said. “In her view, breaking down sexual stereotyping was important not only for women, but also for men. And her deep friendship with Justice Scalia showed how people with very different political commitments could still build meaningful connections. It’s a lesson we’re in dire need of relearning.”

If students are interested in learning more about Ginsburg’s accomplishments and life, there is a documentary titled “RBG” available on Hulu, Amazon Prime and other streaming platforms.