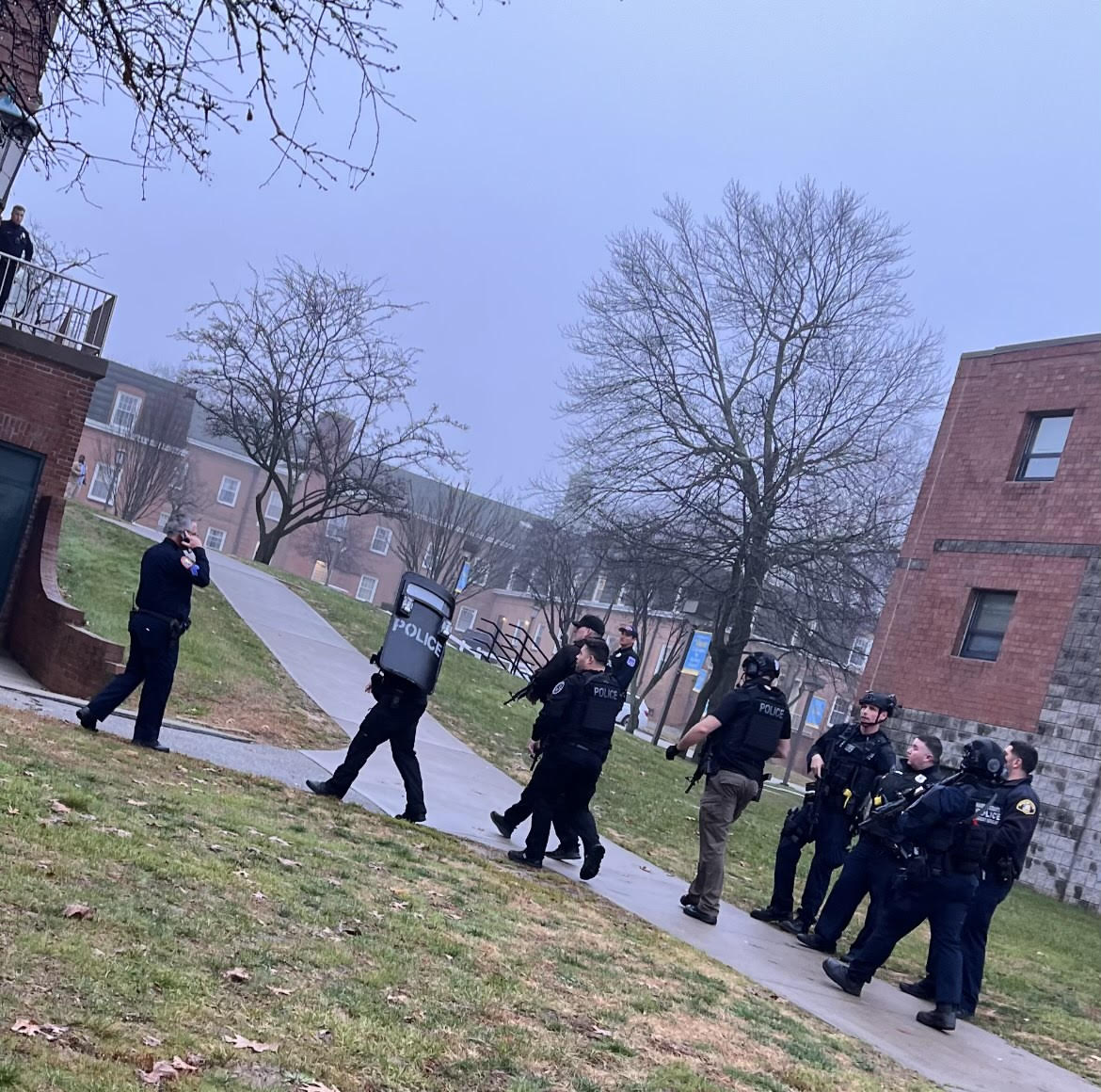 Signs of gunshots were unfounded by the police, and a statement was released by Chief Operating Officer Joseph Schaefer at 6:41 p.m. stating that “there is currently no threat to the University community.”

“I had just finished my classes for the day, and was on my way back to Post … I came in through the front door and headed towards the stairwell on the women’s side. As I passed, I saw people talking to each other in the hallway,” Houska said. “As I started walking up the stairs—and even through my headphones— I could hear a commotion. People were yelling … I stopped for a second, and as soon as I did, I heard five to seven really loud bangs. What those bangs were is up for debate for right now, and is certainly piquing people’s curiosity. But at the time, we thought that there was a shooter in our dorm.”

Houska was working at Vans and witnessed a mall shooting in 2021, and has experience hearing gunshots being fired inside a building.

“I kind of had that thought [of a potential shooting] when [the noises] happened, and I got really scared,” he said. “Those hallways also carry echo, so that could have been part of it but I wasn’t thinking about that at the time. I tried to stay calm … For a second, I hesitated and thought about going back downstairs, but decided to go to my room just in case. My heart was racing … My friends contacted me and asked why there were a bunch of policemen outside of my window. I saw men coming into Post with assault rifles and a canine unit.”

Houska recalled many students being alarmed at the situation.

“The second floor of Post hall has a group chat that started blowing up,” Houska said. “People were saying to barricade your doors, turn your lights off, close your curtains. There was some sort of situation, and people were saying they heard shots. So now, this became a very real situation. We thought that there was an active shooting situation in my hall.”

“I spoke with some of [the police sergeants], they told me that they had received multiple 911 calls in regards to a potential active shooting situation inside of Post hall. They asked me to help remove students from the area, which I did,” Thomas said. “At approximately 3:20, one of the commanding sergeants and I had a conversation where we talked about the process and it was at that point that the officers started clearing the building [of students]. He told me that it was most likely a false alarm. At this point, I met with administration, and we spoke in regards to effective communications with the students. We sent out multiple text message communications.”

Thomas reiterated that the police and SWAT team swept the entirety of Post hall to ensure there was no evidence of a gun being present in the building.

“The police started sweeping Post hall room by room with SWAT teams and canine teams. This took awhile. The whole building was swept top to bottom. No evidence of firearm discharge, including residue or scent, was found,”Thomas said. “The canine units did not find any explosives or gunpowder residue. At that point, Post hall was declared safe and students were allowed to return.”

Upon being notified by the police force that students could return to their dorm rooms, many students still felt unsure of the situation.

“During the event, I didn’t think too much of it,” junior finance major and Post hall resident Emma Thibodeau said. “Although, I was weary because there was a super loud noise in the dorm. But, once I saw a bunch of police officers and SWAT team forces running into my dorm, I felt panicked because that’s not normal. And giving us no information at all is inappropriate and unfair. This is where we live, we have no other place to go. This is where we eat, sleep and shower. I am obviously thankful it wasn’t anything fatal or deadly to anybody, but the fact that it’s been almost a week and students have absolutely no clue what happened is a little ridiculous. And I do believe that the university should provide students with some sense of closure, since this is their home during the school year. Just telling us that the claims were unfounded is not enough, it still could have been anything.”

“I think most people that live here just want more clarity. Like, did the police find anything? What did they find and why aren’t we being told? Especially because we are college students who, yes, pay a lot of money to live here, but we also just live here. It’s supposed to be our safe space and our home,” Houska stated. “I would like to know the university’s recollection of events from that day and what they can tell us. Maybe they don’t know anything.”

Thomas said that the most likely reason for the shouting and loud noises in the dorm was a steel door being slammed shut multiple times.

“Our current working theory is that there was a dispute between two students and a door was repeatedly slammed. Due to the door being metal and the echoing in Post hall, some students thought it sounded like a gunshot,” Thomas said.

The SGA is working on potentially including padding on the doors to reduce sounds from doors slamming in the future, but students are still unsure of a door being the cause for these noises. Doors are often slammed in the dorms, and this does not cause multiple individuals to contact the police.

“The only information the school could provide is that it wasn’t a gunshot,” Thibodeau said. “We can’t rule out that it wasn’t violence if we don’t know what it was. It could have been a domestic dispute. It was definitely something, and I don’t think it was a door slamming. How are we supposed to just go back into the dorms and sleep knowing that this situation is unresolved?”

As students hope for more information from the university regarding what happened in Post hall, the SGA urges students to sign up for the Emergency Alert System for more efficient communication during events at https://web apps.liu.edu/EmergencyContact.Login.aspx.