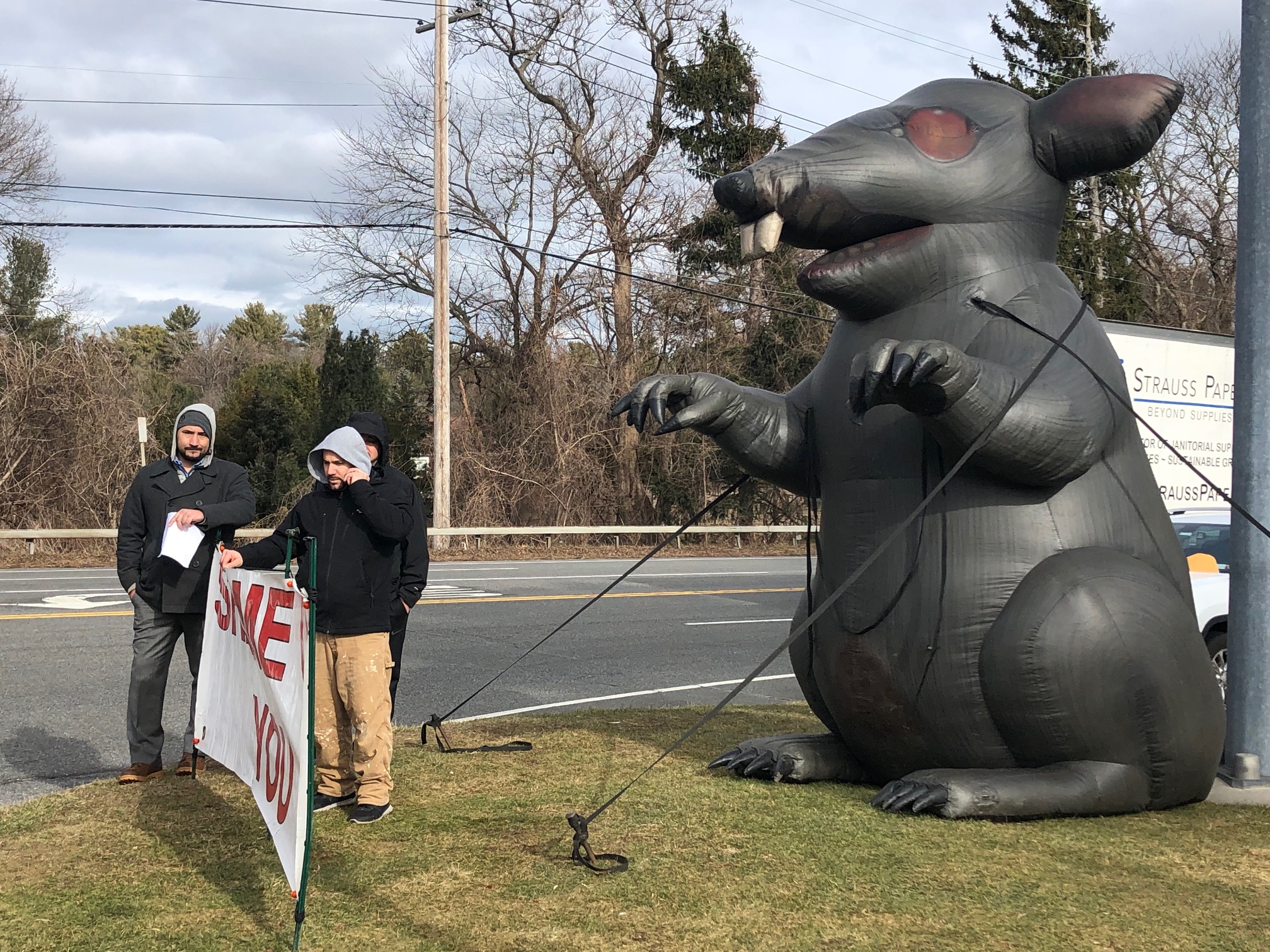 “Scabby the Rat” Welcomes Students Back

A giant inflatable rat, accompanied by members of the Painters District Council No.9 (DC9), were spotted on campus Tuesday, Jan. 14 and Jan. 28, picketing the school’s use of a non-union contractor for Suffolk Hall renovations.

“Scabby the Rat” – a grotesque rodent with bloodshot eyes and buck teeth that stands approximately 12 feet tall – hovered over the school’s entrance and grimaced while union workers handed out flyers to students, faculty and staff as they returned to campus from winter break.

When the school has a project that’s urgent or too intense, the painters on staff aren’t enough manpower to get the job done, according to executive director of facilities, Roy Fergus. “We put it out for bid; we get prices and we ask for prevailing wages, and we bring people on board on that basis,” he said.

Unions tend to prefer prevailing wage because it presents a floor or barrier; a basic minimum salary that employers can’t pay below, according to political science professor and former president of the faculty union, Michael Soupios.

DC9’s flyer asserted that Better Life Builders doesn’t compensate their workers according to the area’s prevailing wage and benefit standards set by the department of labor.

New York law requires public works contractors to pay the hourly amount set forth in any union contract. A DC9 representative who didn’t want to reveal his name said their presence on campus “has nothing to do with union or non-union. It’s about people getting paid properly and we’re out here to inform the public.”

Soupios confirmed that when a company brings in non-union labor, the union perceives it as a job that’s been taken away from its members.

“It’s a scheme that’s used by employers and the powers that be because you have people who are anti-labor and anti-union,” Soupios said. “If you take work away, take jobs away, you cut down on the membership. Of course you’re weakening the union. It’s part of a larger antagonistic attitude toward organized labor.”

When a union is unable to provide a sufficient amount of work for its members it can create disloyalty among the workers that remain. They may begin to question the purpose of paying their union dues. “You create this toxic environment for the union where they can’t justify their own existence against their own workers,” Soupios said.

Union wage standards for construction tradesmen are substantially larger than non-union because they include the worker’s mandated benefit contributions. Non-union tradesmen, also termed “scabs” by union workers, collect the entire amount of the wage or salary, never having to contribute to a unions’ supplemental benefits fund.

When the school puts out an invitation to bid for needed construction or renovation, they hold no bearing over the lowest bidder’s union status. “Another thing that is of concern, we’re going to be building the new vet school and a whole bit. And basically, again, you go through a competitive process, there’s a general contractor, and we basically indicate to him that our standard is prevailing wage,” Fergus said.

The Pioneer reached out to Post’s procurement department to verify if an invitation to bid was ever submitted for Suffolk Hall’s renovations or if the work was outsourced directly, but did not receive a response. DC9’s office and Better Life Builders also failed to respond.

“There are laws on the books in terms of minimum wage. So, if LIU is violating that, the union needs to go to a court and document that the school is violating the minimum wage structure established by the state. It comes down to who is cutting the checks,” Soupios said.

The Pioneer will reach out to the Facilities Services Department for further information.