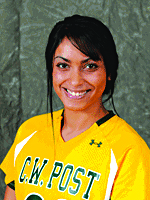 During her first three years at LIU Post, Nan Mayott has appeared in 53 games for the women’s lacrosse team, starting in 17 of those games.  Mayott has a total of 45 groundballs with 61 won total draw controls. Mayott has contributed 71 goals to her team with 15 assists. She was also ranked fourth on the team, with 30 goals, in her junior year. Mayott was named All-American Second team by USACollegeLacrosse.com and ECC Second team in 2011.

Hometown: I was born in Puerto Rico, but I moved to Islip when I was six.

What made you choose to come to LIU Post?

It was close to home, had a great lacrosse program, and was an overall good school.

How has being a student athlete at Post benefitted you?

It’s benefitted me through lacrosse, my scholarship, my friends, and my team. I’ve made a lot of friends by being a student athlete, and it keeps me busy and keeps me in really good shape.

What is your favorite memory at Post with your team?

My favorite memory with my team would have to be beating Adelphi and ruining their win streak in 2010 and celebrating the victory later on.

Who is your favorite athlete?

What are your plans after graduation?

I want to be a police officer or maybe a NYC firefighter. I’ll be taking an entrance exam on April 14th.

Published in Senior Spotlight and Sports