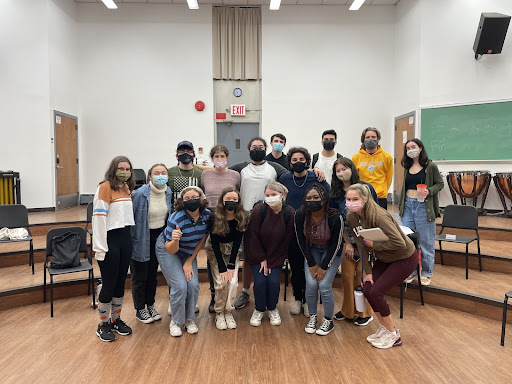 Disappointed at the lack of variety in opportunities on campus for non-music majors to have fun making music, sophomore music education major Ally Perticone and junior music education major Annie Rodriguez took matters into their own hands and established Post’s first a cappella group named “Sharks & Flats” as co-leaders.

“[…] The school didn’t have an a cappella group so we wanted to create one for a different vibe for making music,” Perticone said.

A cappella–derived from Italian meaning “in the style of the chapel”–is a musical performance by a singer or group without instruments.

There are currently 90 collegiate a cappella groups in the United States–the earliest being established in 1873. In recent times, this style has been popularized by the extremely commercially successful “Pitch Perfect” franchise (that sold $565 million at the box office) introducing it to a wider audience.

The most commercially successful a cappella group is Pentatonix–originally from Arlington, Texas, they have over 5 billion views on YouTube and have won 3 GRAMMYs thus helping bring the a cappella style more into the mainstream.

Since its inception last semester, “Sharks & Flats” is swiftly growing, currently having 21 members. To become a member of the club, students must go through a two-step audition process.

“We hold an audition process where they sing any song and site read music on the spot,” Perticone said.

Anyone looking to join the club must have prior experience working with and making music as the group has every intention to compete in the future. The biggest collegiate a cappella competition is the International Championship of Collegiate A Cappella (ICCA) in which hundreds of collegiate a cappella groups from all over the world compete. Groups are judged not only on vocal performance but visual performance as well.

“You should have a good amount of experience and background. The group is very serious and we are looking to compete,” Perticone said.

Joining this club would be a beneficial and enriching experience for any student interested in music.

“It’s a fun music making experience and it’s nice to be around people who are passionate and empathetic and caring. A lot of musical theatre majors can’t join chorus or choir due to their schedule so it’s a nice opportunity for them to get to make music,” Rodriguez said.

The group meets every Tuesday from 8:00 p.m. to 9:30 p.m. in the music rehearsal room. For further inquiries, students may contact Rodriguez and Perticone at @liu.acappella on Instagram.

Published in Arts and Entertainment, Features and _Front Page