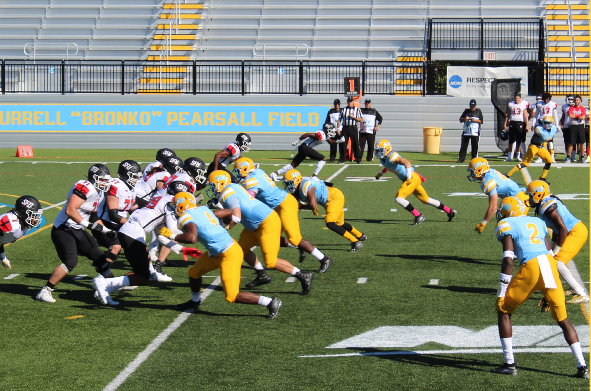 The Sharks fell with a score of 0-30 against the Saint Francis University Red Flash on Saturday, Oct. 19 in their first homecoming game as a Division I program. It was a hard hit for the team, who had a rough start to the season.

“It’s always disappointing with a loss and it gets even [more] magnified when it’s homecoming and you have support from the administration, the student body and the alumni,” Head Coach Bryan Collins said after the game. “You always want to put a good show on and you want to show that you are progressing, so we are a little bit disappointed with our result today.”

Coming into the game with 0-5 record, the Sharks hoped to take their first win of the season. The first half was a defensive battle. After a 16-yard rush by Saint Francis Univeristy’s Derrick Wiley, the Red Flash would take the first score of the game on a 26-yard field goal by Trevor Thompson, making the score 0-3 in favor of the Red Flash with nine minutes left in the first quarter.

The Sharks looked to answer immediately. A 30-yard pass from junior quarterback Clay Beathard to senior Tim Marinan put the Sharks in a position to score, but redshirt freshman Briant DeFelice’s 31-yard field goal attempt was blocked, holding the score 0-3.

With two minutes left of the second quarter, the Red Flash found the end zone for an 11-yard touchdown, extending the Saint Francis University’s lead to 0-9 which would be the last score of the half. “I thought we were very competitive in the first half, we missed a couple of opportunities offensively, but I thought de-fensively we played really well,” Coach Collins said. “Then I think we just got worn down in the second half by a team that’s maybe a little bit deeper than we are right now.”

Coming out of halftime the Sharks tried to create offensive play, but were only able to get one drive throughout the third quarter. The Red Flash took command, but did not manage to score.

On the first play of the fourth quarter, the Red Flash scored a touchdown and earned the extra point on the following kick, extending the Red Flash lead to 16-0 with 14:55 left to play.

After forcing the Sharks to repeatedly punt the ball away, the Red Flash would score two more touchdowns together with approved kicks, making the score 0-30 before the final whistle.

Redshirt junior nursing major Jerome Brooks felt disappointed after the loss and said the team didn’t have their head in the game. “We just start to lose mental focus at the end. We do silly mental errors that we shouldn’t be making,” he said.

However, Brooks said the team also had positive sequences that they will take with them going forward. “A lot of the freshmen stepped up today and played well. People made some big plays,” he said. Coach Collins shared Brooks opinion saying, “we had some young players that played a good game today and I think certainly the future is bright.”

Coach Collins said it may sound weird to say that the future is bright when their record is 0-6, but that this year is about letting young players develop. “We have very young players that are playing some valuable minutes and they are going to gain experience,” he said.

Collins also pointed out the importance of not getting torn down by the losses. “A loss is horrible, but you just can’t treat it as such,” he said. “We have to build upon it and use it as lessons learned and motivation and progression.”

As a coach, he said it’s important to keep a positive attitude towards the players to keep them motivated and focused even if things don’t go as planned. “What you need to do is a building process, not a tearing down process,” he said.

Going forward, the Sharks will continue to look for their first win of the season on Saturday, Oct. 26 against Central Connecticut State University. Brooks is hopeful that the team will be able to reload. “I’m pretty confident in us that we will get it right next week. We will practice hard tomorrow and throughout the week, clean up our mental mistakes and then just get back into it,” Coach Collins said.