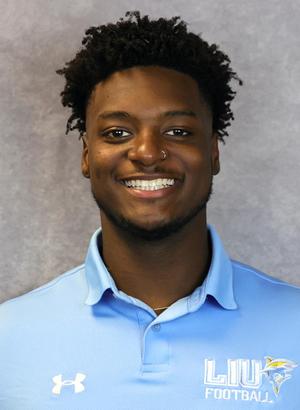 On Saturday, Sept. 10, the LIU Sharks football team witnessed one of the best individual performances in program history.

Victor Nelson Jr., a redshirt sophomore from Gainesville, Fla., picked up three interceptions versus FCS’ fifth-ranked Villanova University. This is the first time in Division I history that a Sharks’ player has recorded the tally and the first time since 2018 the feat was accomplished for LIU.

The 6-foot-4, 209-pound defensive back had four interceptions through the first two games of the Sharks season, which happened to be his first two starts in his college career.

In an interview with WCWP, LIU sharks head coach Ron Cooper talked about what separates Nelson Jr. from everyone else.

“Vick is a very talented guy, you know. I saw it probably from day two or three in spring practice when he didn’t even play last year. He’s been on the team, special teams, but he’s tall, he’s long, he’s got range,” Cooper said. “Most importantly, [Nelson Jr.] is a smart kid, smart athlete and understands the scheme and those formations.”

Nelson Jr. committed to the LIU football program after former Sharks quarterback Camden Orth suggested he come to New York and join the up-and-coming first group of Division I Sharks.

As Nelson Jr. described in his interview with WCWP, coming to LIU wasn’t his first option.

Victor Nelson Jr., who is now studying to take the MCAT and pursue a career as a doctor, is tied first in interceptions in the FCS and is looking forward to reaching bigger goals as a football player.

“I have small intermittent goals and bigger goals upon that, but I guess right now it’s being all NEC, is what I can say off the top of my head,” the star defensive back said. “I mean, I want more picks. I got an interception, I want more, so I wanna lead the NEC in interceptions this year. Ultimately, the goal of any college football player is to go to the league.”

Not only has Nelson Jr. been confident in himself, but others around him have noticed his development throughout the season so far. Defensive Coordinator Kevin Cosgrove spoke to WCWP about his pride in seeing players like Nelson Jr. develop under his coaching.

“You like to see the kids improve. It’s probably one of the best things in coaching. When you can watch a kid develop and become a player, you see what he can be,” Cosgrove said. “It just makes you feel good as a coach because that’s what our job is. Whatever talent of a player you have, you have to try and get them to become the best player they can be.”

Headed by Victor Nelson Jr.’s hot start to the season, the Sharks are looking to make their first NEC playoff tournament in Division I history with conference games beginning on Oct. 1.

Though the Sharks are winless on the season, head coach Ron Cooper detailed what Nelson Jr. and the rest of the Sharks’ mentality are going into conference action.

“Well, the guys are getting better; they’re working hard. I don’t have complaints about their attitudes, and they definitely want to win and get better. It’s time now, these games are very important.”

Victor Nelson Jr. and the Sharks will look to get their first win of the season when they travel to North Andover, MA, to face the Merrimack Warriors on Saturday, Oct. 1, at 1 p.m. Listen to a live broadcast on 88.1 FM WCWP.org or The Wave.